Meet The Pietasters: Unsung Heroes of the 1990s Ska Explosion 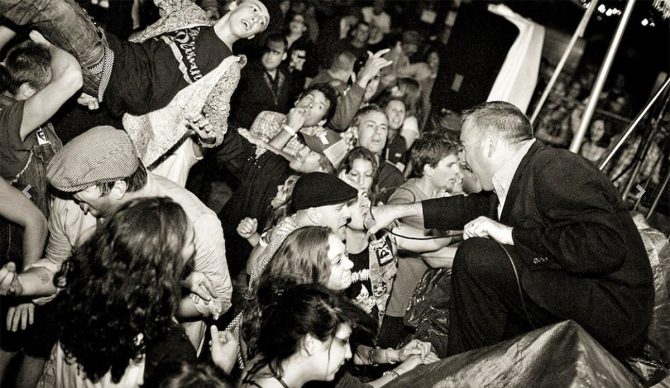 Washington D.C.’s The Pietasters are unsung heroes of the nineties ska-punk explosion. After nearly 30 years touring alongside the biggest names in the genre, the eight-piece is set to headline the second stage of this year’s Punk Rock Bowling (PRB) festival, a Memorial Day Weekend music festival in downtown Las Vegas. I sat down with frontman and founder, Steve Jackson, to chat about their headlining slot at PRB, Rod Stewart, and aging as a veteran punk rocker.

Is this your first time playing Punk Rock Bowling?

The Vegas event, yeah. We played the East Coast show a few years ago in Asbury Park, New Jersey, but I’ve been to Punk Rock Bowling years ago to visit my friends in The Bouncing Souls. This is the first time the band will be performing at the big Vegas event and we’re really looking forward to it.

How did that opportunity come about?

With these big events, I never know how it works. I want to say it’s because we’re such an awesome band and put on such a great show in New Jersey that they said, “We’ve got to get them out to Vegas for the big one!”

Is this an event you guys will stick around for all weekend, or is it the type of thing where you will play the show and take off?

We play Denver on Friday night and then fly in Saturday and we play Saturday and then we play a pool party on Sunday. Rancid is headlining one night. The Specials another night. Descendents. The Damned. FEAR. I grew up on eighties punk rock and I remember seeing so many of those bands when I was a kid. It’s just surreal to be sharing the stage and wandering around with them. I want to take it all in.

An event like PRB has potential to introduce your band to folks that have never seen you before. If you had to pick a few songs from your catalog to onboard new listeners, what would they be?

That’s a good question. The set we’re doing on Saturday is exactly about that. I think it’s a 25 or 30-minute set and we’re trying to fit in seven songs or so, so it’s pretty quick. We will be rolling out all of our beer-drinking, singalong anthem songs as well as the catchiest of our broken-hearted love-type songs. I don’t know man, we just kind of cram it all in and try and whip up the audience and keep them engaged for the whole set. No talking between songs, none of that stuff. But you know, [the songs to know are] Maggie Mae and Freak Show and Out All Night and maybe our cover of The Business’, Drinking and Driving.

With a song title like “Maggie Mae,” is there a Rod Stewart reference in there somewhere?

(Laughs) No, there definitely is not. Nothing against Rod. It was about a bar that we used to hang out in. Everybody has that bar when they’re in college where the bartender is giving you every third drink for free and you just know that it’s a friendly place to go and cause trouble and not get thrown out of. Her name wasn’t Maggie. I think it was Stephanie. I think our guitar player picked the name of the song. And I think there was a bar in New Orleans named Maggie Mae’s or something so there might have been a tie into that, I don’t know. It gets fuzzy.

The Mighty Mighty Bosstones released a record last year and the first song on it includes a reference to your band.

Dude, I couldn’t believe it when Dicky [Barrett, frontman for the Bosstones] sent the track over before they released it. I was like, “Are you kidding me? Is this an alternate verse or something?” He was like, “Do you like it?” and I was like, “Fuck yeah I like it!” (laughs). Those guys are like our older brothers and I just love them so much and I love their music. It was so cool for them to put that verse in. I feel like it references our original bass player, Todd. We did a lot of touring with the Bosstones in the ’90s and Todd would always entertain them. He was quite a character. I feel like that was the first reference, but the lyric “She had little to no interest but he chased her” could suit any of the three guys the Bosstones know who have played bass for us (laughs).

You recorded two albums for Hellcat in the nineties, then followed that up with an album for Fueled by Ramen in 2002. For someone unfamiliar with record label dynamics, can you explain what was happening at that point in the band’s history?

Well, it was timing and fate, I think. We worked our asses off and put a couple of records out with Moon Records, which was a small ska-centric label from New York that The Toasters ran. Then Tim [Armstrong, of Rancid] put together this Hellcat label with The Slackers and Hepcat and a bunch of different bands that were touring. Ska was pretty popular at that time with No Doubt, The Bosstones, Sublime and all those bands doing big things. So we went out to California and had a two-album deal with Hellcat and Epitaph and we were fortunate that Brett Gurewitz took a liking to the band. We stayed at his house and he produced both records. We got to live like rockstars and record at all these crazy studios around southern California and Brett would be like “I want this gear! Let’s buy it and use it on this song!” and we’d be like “Fuck yeah man, let’s do it!”

By the time Awesome Mix Tape came out in 1999, the writing was on the wall. Ska was lame, nobody liked it anymore, and people moved on to other things. In my memory of the deal, it was “I love you, Tim. I love you, Brett. Thanks for the memories.” At that time I don’t know that the band thought we were going to continue playing or making music. We did and we got to back up James Brown and do some other crazy stuff.

What is the best and worst thing about aging?

Oh man. I guess the best thing is you’re still alive. The worst thing is you get fat (laughs). I don’t know man, I’m pretty lucky. I haven’t hit the wall on any of the usual things. When you get old you slow down. When you’re younger you go out at nine and stay out until five and go to work at seven and then go out the next night. Now it’s like “Do I really want to drive across town to see a show?” I guess being a curmudgeon is the worst part [of getting older] and being alive is the best part.

I understand you have a ton of new songs recorded but have wrestled with how to release them. Where do you stand with that?

A couple of weekends ago we were on the road and kind of got to a new strategy with that. Half of the guys wanted to put out an EP every few months with a video and do that thing, and the other half were like “We want an album’s worth of material.” The thing is, nowadays you put out an album and unless you’re going to tour non-stop, the attention only lasts as long as you’re paying the publicist to keep the reviews coming.

The other thing is these crowdfunded projects. We sort of get an icky feeling about raising money before you have something to show for it, but we’ve seen what other bands have done so we’re trying to get the songs into a nice cohesive unit and have a strategy in mind, then get some funding from some people that like the album.

The other thing is we don’t do this full time. Our friends in The Slackers — the band is their job. They do a great job of doing an album every year or so and touring non-stop to support it. We’re trying to have our cake and eat it too. We have kids and families and things like that.

A lot of fans must think the band is your full-time gig.

Or they think that if they saw your band on MTV in 1998, you’re sitting on the beach drinking beer all day (laughs). It’s like “Yeaaaah, that’s not really the economics of a band with eight people.”

What does life look like for you when you’re not on the road?

I run a small business. Our trombone player is this brilliant computer programmer-coder-thinker-guy. He was testifying in front of Congress with Arne Duncan during the Obama administration. Our drummer runs a grocery store. It’s all over the board, but it’s mostly just finding gigs where you can use your vacation time wisely. The band is fun, but it’s a juggling act for sure.