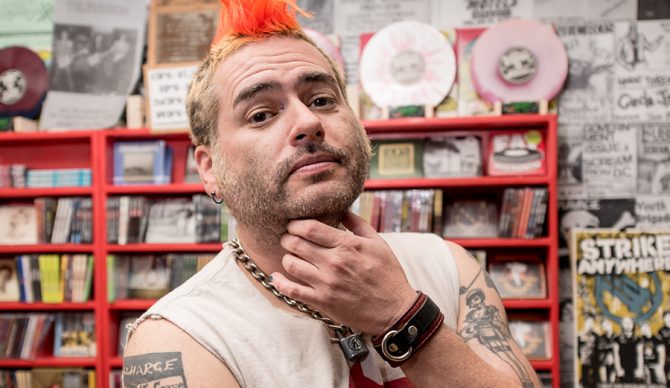 Last month marked the launch of the inaugural Punk In Drublic Craft Beer & Music Festival, named for NOFX’s classic album (and put on in collaboration with Fat Mike himself). The tour will make a stop in Huntington Beach on Saturday, October 28th and will feature co-headlining acts NOFX and Bad Religion, along with four hours of beer tastings and 100 craft beers. I chatted up Fat Mike to talk about the tour and get an update on his adventures in surfing this year.

Where did the idea for the Punk In Drublic Festival begin?

It actually started with Cameron [Collins] from Brew Ha Ha Productions. They do beer festivals and he’s an old punk rocker and he was just talking to John [Reese, from Synergy Global Entertainment] and he was like “Man, we should do a Punk In Drublic festival and get Fat Mike involved.” They wanted to do 21 bands in Los Angeles, have it be 21 and over, and have 21 beer companies. I told them I didn’t really want to be involved in such a huge thing. But I said “Let’s talk about it. Let’s make a festival that’s awesome. And let’s tour it.” I told them I’d only want to see five bands and have NOFX and Bad Religion on the bill. That’s what I would go see.

Are there any bands you wanted on the bill that couldn’t participate?

I wanted The Interrupters but they were busy. And I just talked to the Bad Religion guys an hour ago and we’re going to do 18 shows together next year because Tacoma this year was so fun. And Boise.

Well that tour announcement is certainly breaking news. What about those cities made the shows different?

They were our first test of doing an “over 21” show with free beer with a tour that’s only on the weekends. And it wasn’t in the summer so it wasn’t super hot. It’s just different. Everything that I would like in a festival is what we’re doing. Like, I get to make rules. I made a rule in Tacoma that between bands there would be no punk rock – only Herb Alpert.

Is one of the rules that the festival ends at 9? I saw that somewhere. That’s early.

It’s so people can get home. At one of the shows I asked the crowd how many people had babysitters and half the people raised their hand. But it’s like “Hey, you can keep partying if you want.” I certainly did.

Gimmes were originally on the Huntington bill and then that disappeared. What happened?

Yeah, I saw you guys at Punk Rock Bowling this year and it was funny because Jay was on stage playing and you were off on the side of the stage. What was that like for you?

It was so weird, dude. I had just decided to go to Punk Rock Bowling the day before. It’s the second time I’ve seen The Gimmes without me in the band. It’s kind of nice though because I take up a lot of space being drunk and talking a lot. I like it when it’s just the Spike show.

You definitely made your presence known during the Bad Religion set though.

You know what, that’s what’s so cool about punk rock. You can’t do that in metal or something. I just ran on stage and said “Jay, give me your bass!” and he was like “Ok!” and I played the song. It wasn’t planned. That’s how good of friends we are with Bad Religion. It’s why we always want to tour with them. They’re my favorite band.

The irony to me about Punk In Drublic is that it’s a beer festival where half the guys in the bands are sober.

Yeah. I don’t know. I didn’t’ really think about that. I drink and party and so do Melvin and Jefe. Jay and Brian [from Bad Religion] have been sober for a bit. I’ve had beers with Greg Graffin though. He came to my house the other day. It was the coolest thing ever. 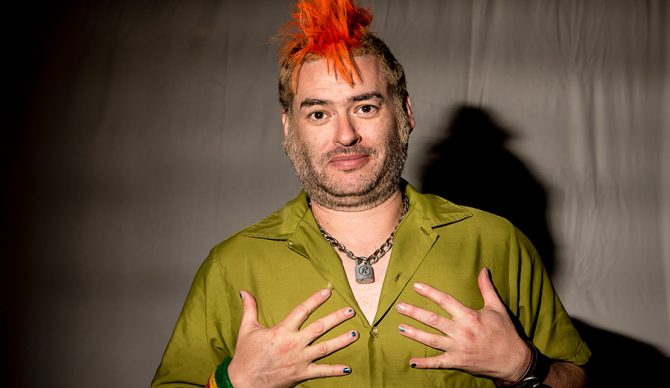 How do you expect the Huntington Beach show to differ from others stops on the tour so far?

I expect it’ll be much more violent.

I thought those days of violence in the punk scene were over?

Well, that’s the thing. There were about 10,000 people in Tacoma and the paramedics said only two people went to the hospital, which is very low, but they said there were 200 fights. We were giving free beer away, so…

Speaking of Huntington, I poked around your Instagram and it looks like you were recently on a dad-daughter road trip that stopped through Long Beach.

And Redondo Beach too! Fletcher [Dragge, Pennywise guitarist] took us out on his boat. We broke down in the ocean and had to get rescued. As a trip, I have to say it’s one of the best things I’ve done in my life. It wasn’t a family trip. It was me and my daughter just spending 10 days on the road together. We didn’t make any plans. It was like “What do you want to do?” So we’d go on a bike ride. “Want to see a movie?” We’d go see a movie. [My daughter] came home and said to her mom “That was the best time I’ve ever had with daddy.” It made me cry.

You’re fairly known for your wordplay. What’s the story behind the album title “Punk In Drublic”?

That’s the thing, my mind is just very weird. It really is. I just think about things. I was writing a song about how Switzerland called itself neutral but they really took all the money in World War II and I just said “Oh, Switzerland! That’s funny. If you just drop seven letters it’s spelled ‘Nazis’ backwards.” It’s weird. My mind just plays those word games all the time.

What about the cheerleaders on the cover of that album?
That was just some guy. He handed me the artwork and had actually offered it to some other band but they didn’t like it so we used it. I don’t think NOFX has the best album covers in the world. We kind of don’t care that much.

Oh! I surf now! I finally learned. I mean, I’ve tried like every three or four years, but I’ve never been able to get up. So, finally, I got up in Hawaii this year. The thing is, I caught like two waves and was stoked and rode them pretty long. It’s not like some original way of surfing, but it’s a pretty big board. I’d catch it on my knees, like a paddleboard, and leap forward, catch the wave, then stand up. It works for me because I get so fucking tired of paddling. I know it’s Hawaii and it’s “easy,” but it’s the hardest thing in the world! 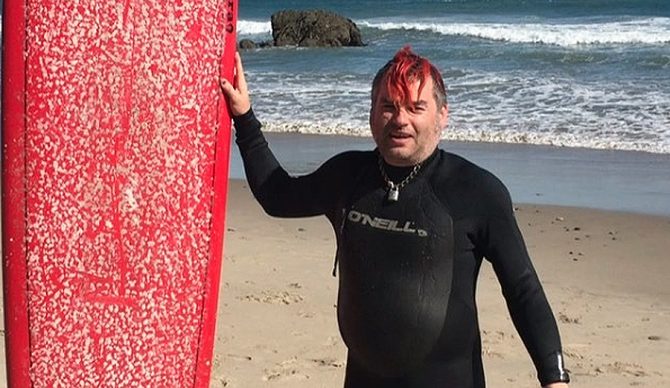 “Not that I’ll ever go to f**king Teahupoo, but goddamn! Surfing has just become a totally different thing than I remember.” – Fat Mike. Photo: Instagram

I don’t know about “easy,” I mean it is Hawaii and there are some monster waves in parts.

But you know where I was surfing right?

Waikiki. We went to another place too. I think it was called Bowls or something.

Do you plan to surf more now that you’re back in California?

Oh yeah. Definitely. Eric Melvin lives in Del Mar and I really like that beach for surfing. Little waves, you don’t have to paddle out that far. You know what I do now too? I spend so much time watching surf videos. I can’t stop watching. Not that I’ll ever go to fucking Teahupoo, but goddamn! Surfing has just become a totally different thing than I remember.

Note: Punk ‘N Brew Craft Beer & Music Festival will be in Huntington Beach on October 28. Tickets start at $59 and are available through the festival’s website.