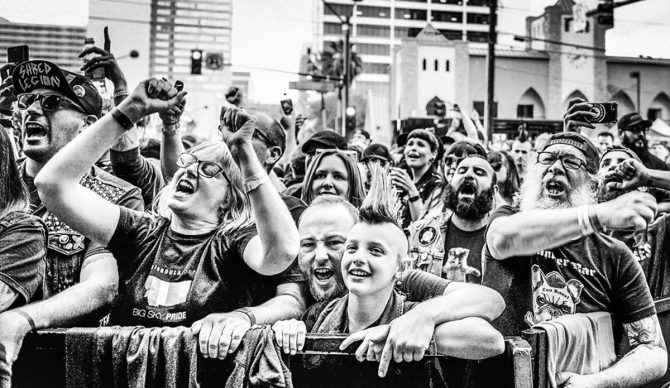 Shawn Stern is a true OG of punk rock. As the frontman for seminal punk act Youth Brigade, and co-creator of the iconic Punk Rock Bowling music festival, Stern has been a leader in ensuring that the genre stays alive and well for the disenchanted masses. Here’s a dive inside the mind of the man leading the charge, bringing the punk rock music festival to Las Vegas every year.

What goes into constructing the lineups for this festival?
Well, Mark [Stern, co-creator of PRB] is the one who books it. We talk about it. Basically, his first thing is to try to get the three headliners and there are only so many bands that can headline a festival like Punk Rock Bowling. You were there in 2017 – that was the year Iggy Pop played. When you get someone like Iggy – or this year we got Madness – when you get somebody big like that, that tends to make things a little bit easier. We end up having a lot of bands repeat. We try not to do bands more than once every two to three years but trying to find three bands that can headline a music festival like this is not always easy. We’ve talked about getting Madness for years. And The Specials too.

Who was the hardest band to book this year?
What I can tell you is that there was a whole long list of bands that Mark thought he had that didn’t work out for one reason or another. That happens every year. He’s trying to book bands eight or nine months in advance and a lot of times the bands don’t know what they’re doing at that time so they don’t want to talk about it for a few months. Then they’ll say they are interested and are ready to work things out and next thing you know they get an offer to do a tour with some other band or they get a big-money offer from another festival. It used to be there were a lot of festivals going on during the same weekend or either right before or right after ours. You had Ink-N-Iron in Long Beach, Musink which is about a month before ours, Sasquatch near Seattle. Ink-N-Iron is gone. Sasquatch is gone. FYF was also in the summertime. Even if it’s two or three months later if a band plays in LA – which is a huge part of our draw – that could be a problem for us. The fact that some of those festivals have disappeared now is good for us. We’ve been trying to get the Circle Jerks to do a reunion for quite some time now as well, so that was a big deal.

How do you convince bands you have a festival worth being at? Do you think this one has reached a size where its importance speaks for itself?
It definitely has grown and people are more aware of it, but here’s a perfect example of what goes on. We had Shame last year who were amazing. They’re the first one of these new bands to play. We’ve seen IDLES, we’ve seen Amyl & the Sniffers and talked to them, we went and saw The Chats…

All of them were interested in playing PRB and we’ve been talking to them and their management for a couple of years now. We thought they were going to play this year, but now they are now going to play Coachella. I get it. Coachella — especially if you’re a band coming from overseas — is one of the biggest festivals in the world. Why wouldn’t you want to play that, right? But these big festivals are really four or five festivals in one. There’s a stage doing hip-hop, there’s a stage doing EDM, there’s a stage doing indie. That’s Coachella. Coachella is a lot of fun and I’m sure those bands will do really well and be seen by a bunch of people who have no idea who they are, but if they come out to Punk Rock Bowling they are going to be seen by people that are much more open to the kind of music they are making.

In my experience, PRB is a festival you have to attend to really understand. It’s not just the music – you have comedy, film screenings, bowling and everything else. You can be sitting at the pool and next thing you know you’re chatting with one of your musical heroes. It’s a unique vibe.
This is really a community of people and friends we’ve been working with since the late 70s. I mean, we just played a show the other night with The Dickies, who are the first punk band Mark and I ever saw when we were 17 or 18-years old. We’re still huge fans. That’s the thing. With punk bands, there aren’t really “rock stars.” It’s changed, of course, but still, the bands hang out and people can just come and talk to you and there tends to not be that snotty rock star attitude. Most bands aren’t selling millions of records, but the fact that [punk rock] has survived despite that is because of the community of people and the fact that it really touches people’s lives and hopefully inspires them to try and make change. That’s what it’s always been about for me. That’s why I got involved in it. That’s why we started a band and a record label and this festival.