Steven Kean is Creating Waves in the Most Incredible Way 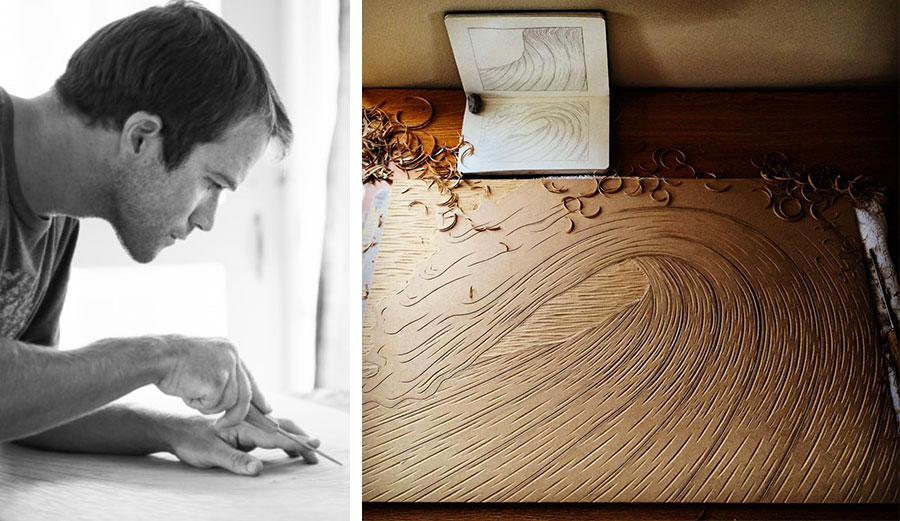 Steven carving his own lines.

I caught up with Steven Kean just after a morning surf session at his local break on the island of Oahu. I had called a few minutes early, and as we began catching up via Facetime, his walk from tropical outdoor space to a covered porch revealed flashes of palm trees and blue skies. His hair was still wet. His glasses reflected the Hawaiian sun into the camera. Without question, he has a much more lush office then I do. Luckily for me, he was gracious enough to pan the camera outward from his lanai so that I might feel Oahu’s magnificence, if only in my mind. The view was vibrant, tropical, sunny, and filled with potential energy. A perfect blend of visual beauty and meditative stillness. Two qualities that Steven finds in his form of art known as relief printmaking.

An ancient art, relief printmaking has origins that date back to 100 AD when the Egyptians used wood carvings and dyes to imprint images on fabric. Variations of the art form percolated through civilizations until around 1800, when the technique was abandoned for more modern methods. Since then, however, relief printmaking has been a staple in the Japanese arts and has surfaced abroad as a niche platform for artists who want a unique way to create. Steven is one of those artists.

The art of relief printmaking is both physical and beautiful. Humble yet indulgent. When I asked him why he was drawn to this art form he said, “carving the lines into wood is something like riding a wave.” Steven went on to explain that when the knife carves that first line it is not unlike navigating a surfboard along a breaking wave face. There is a physical component, a mental component, and an artistic component all woven into one experience. He is able to bring life to the blank. With each stroke of the knife, his vision is turned into reality. “It’s almost like a meditation when I begin carving lines into the wood.” 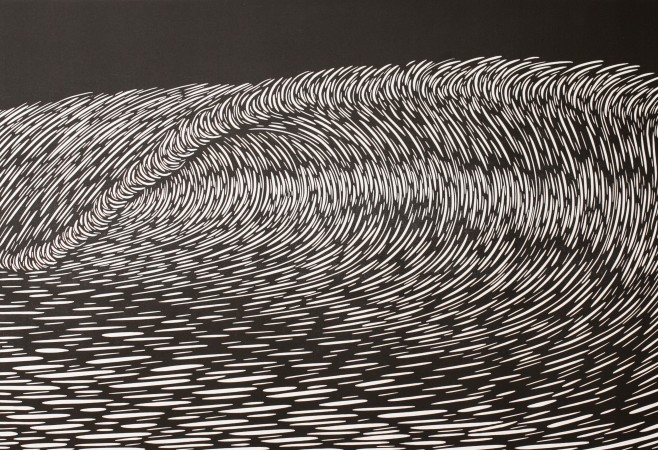 Perfect and Hollow by Steven Kean

Finding an artistic passion and having the confidence to create are two aspirations of anyone with a penchant for art. While employed as an art teacher in a New Jersey suburb, Steven decided that his desire for personal artistic cultivation outweighed the safety and security of steady employment. With his mind made up and his affairs in order, Steven packed his gear and set out on an adventure that would take him halfway around the world and eventually land him in the ideal place to surf and create.

As any surf adventurer in his position would, Steven decided to begin his journey in Australia. He had visions of surfing world class waves and exploring the unique landscapes down under. The excursion was going exactly as planned, with both creative and personal freedom in abundance. He spent weeks traveling Australia’s coastline and surfing waves unlike any he had on the east coast of the United States. Life was bliss. Before too long, though–and as is often the case of many wanderers–money began to run low. Without a work visa and 10,000 miles from home, reality crept into his consciousnesses for the first time since leaving New Jersey. Although many guys would have thrown in the towel and gone home, Steven’s artistic spirit was budding and he had no plans to return to the monotony of a day job. Keeping his adventurous spirit engaged, he managed to pick up a few odd jobs but quickly realized that Australia may not be the place to call home. Determined to continue his journey towards artistic revelation, Steven decided to pack up shop and head for the island of Oahu, Hawaii. 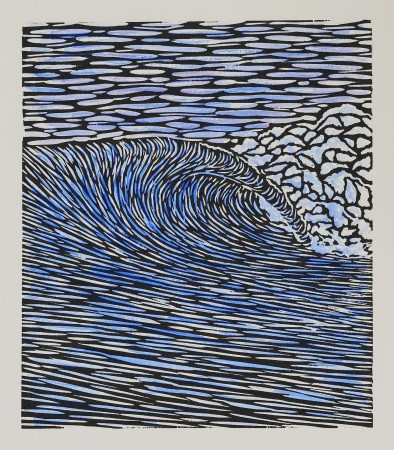 Since landing on the island of Oahu in 2008, Steven has been able to build meaningful and fulfilling relationships, both personal and professional. Like most young folks who pack up and move to a distant place, he first began working in restaurants to support himself and his dreams. Before long, his experience and knowledge of the arts landed him a job in the school systems as a substitute teacher, which then progressed into a full time job teaching 4th/5th grade art at Mililani Mauka Elementary School. He also teaches an art outreach program at the Honolulu Museum of Art, and is an active member of the Honolulu Printmakers.

With steady work secured and having settled into the pulse of the Hawaiian culture, Steven once again began to focus inwardly on his creative process. Fast forward three years and Steven’s hard work and dedication to his craft are beginning to get noticed all over the island. His prints are currently featured in The Beet Box Cafe on the North Shore as well as Manifest in downtown Honolulu. His work has also been exhibited in the Honolulu Printmakers Annual Exhibition, The Friends of Sunset Beach “Celebrating the Arts” auction fundraiser, and the Honolulu Museum of Art Staff Exhibition.

Steven is one of the most humble people I’ve ever met. He is an avid surfer and a passionate artist, and in a time when most of the world is focused on negative vibes, he is the embodiment of Aloha.