Honoring the Legacy of Family, Dedication, and Authenticity: The Paskowitz/Hosoi Live Art Show 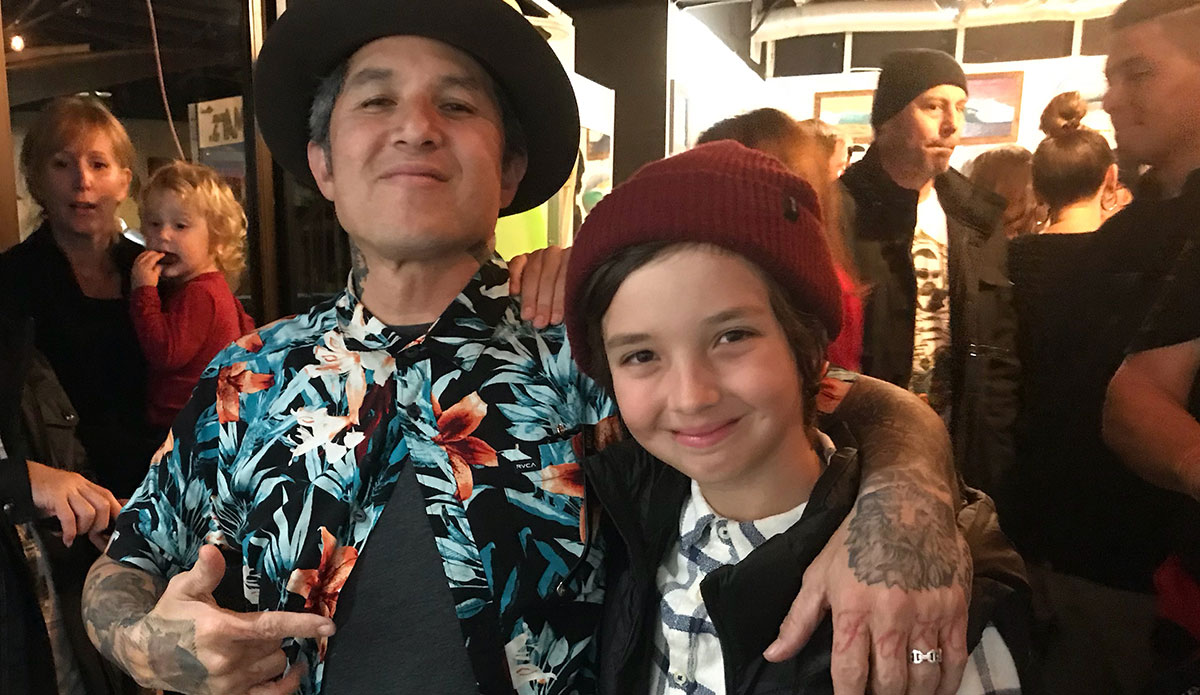 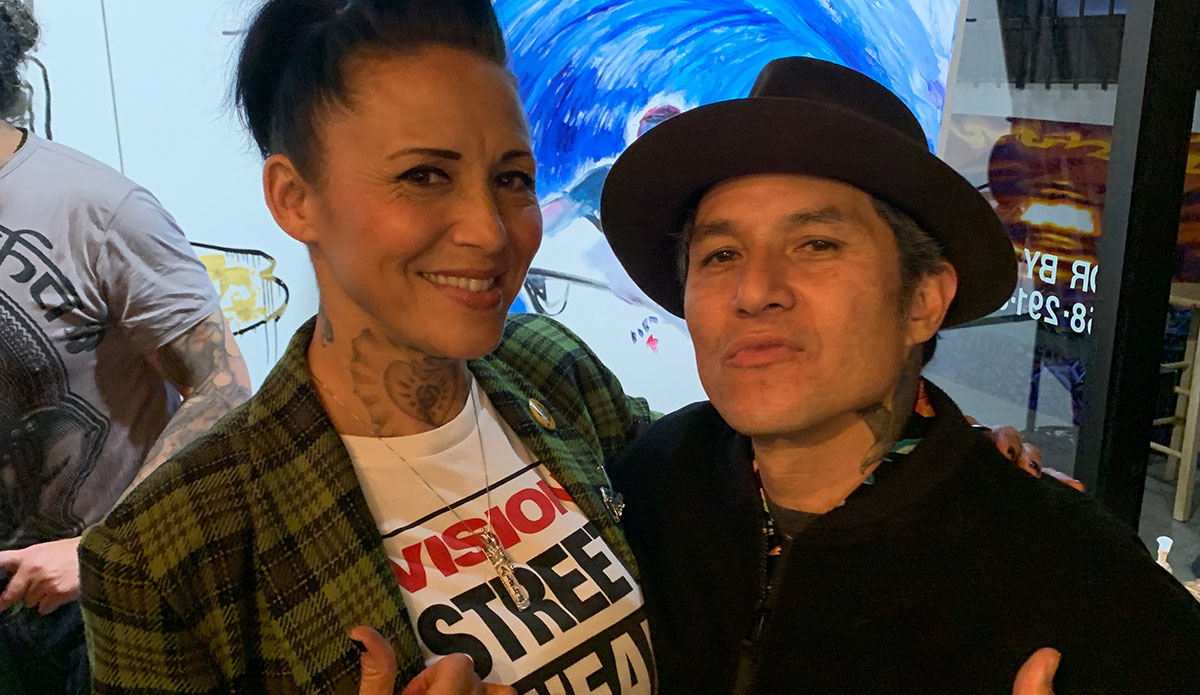 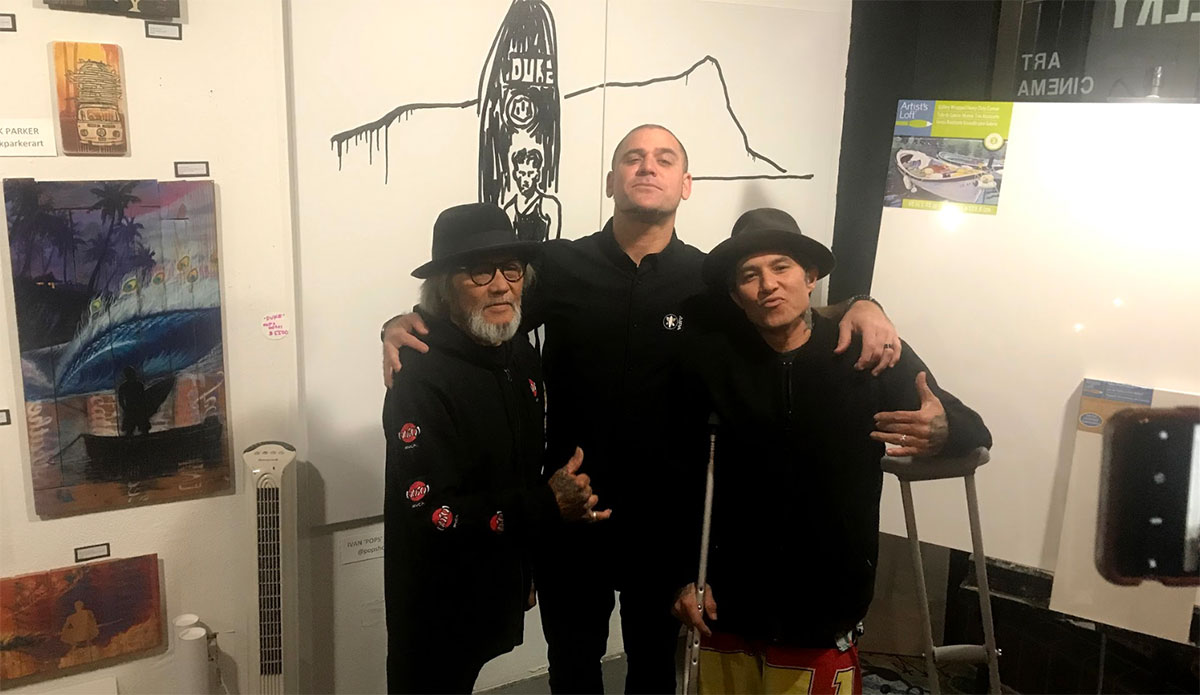 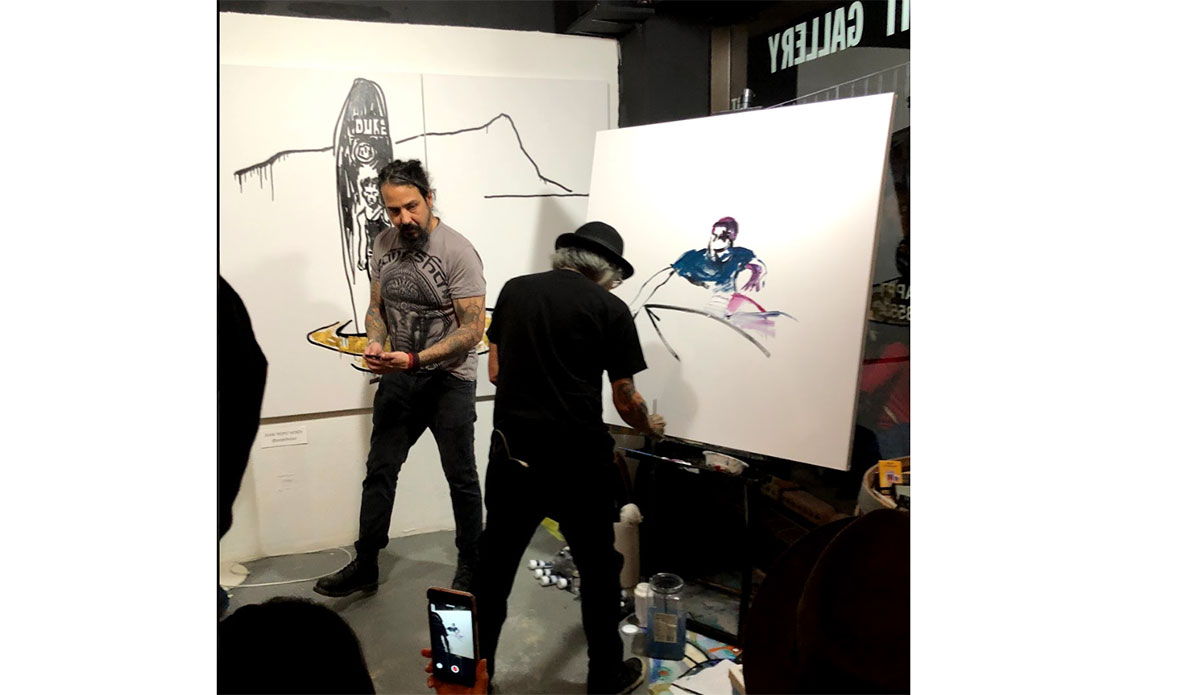 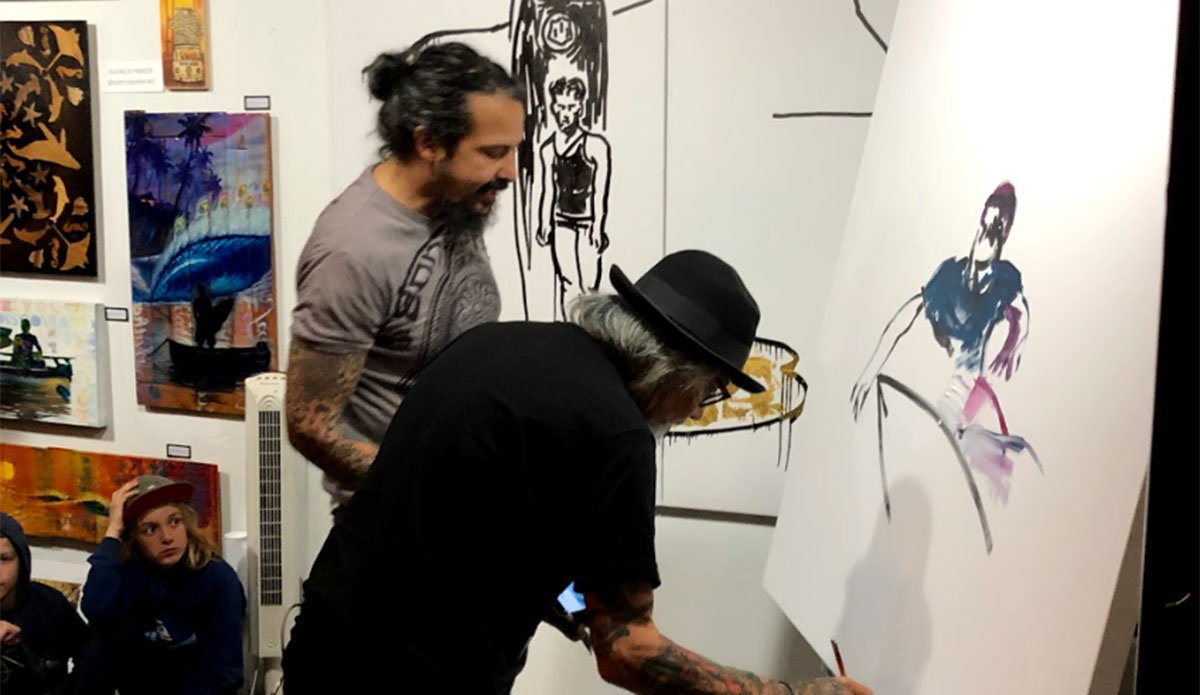 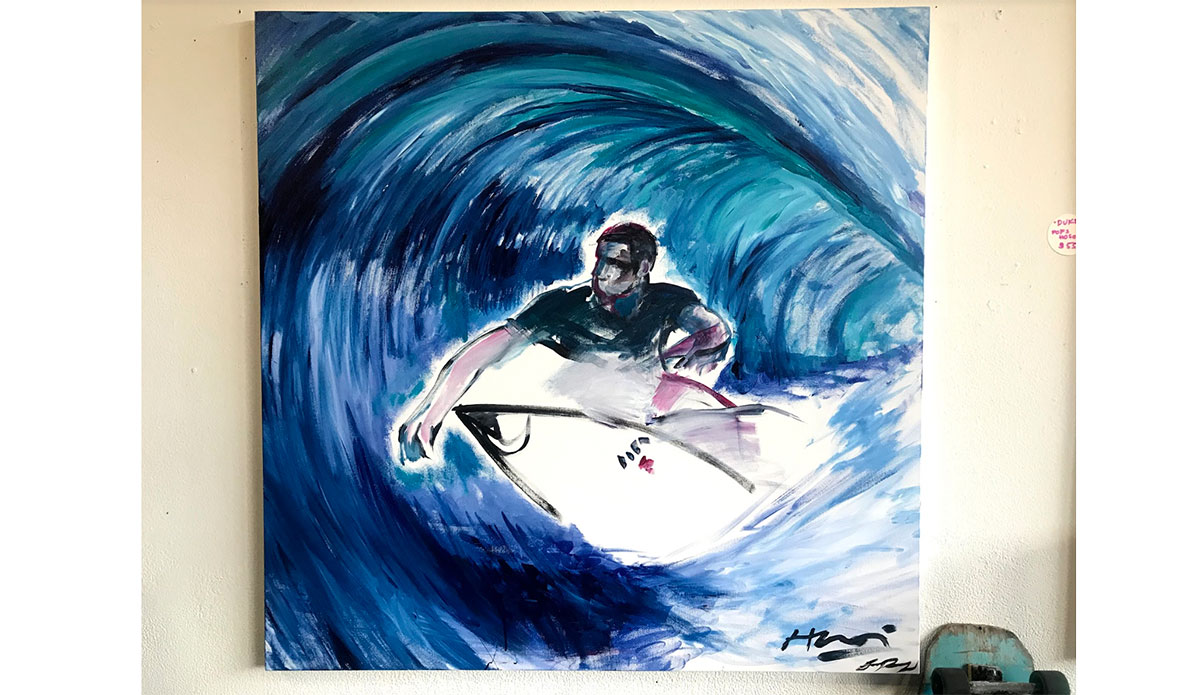 The final product was a thing of beauty. Image: Supplied 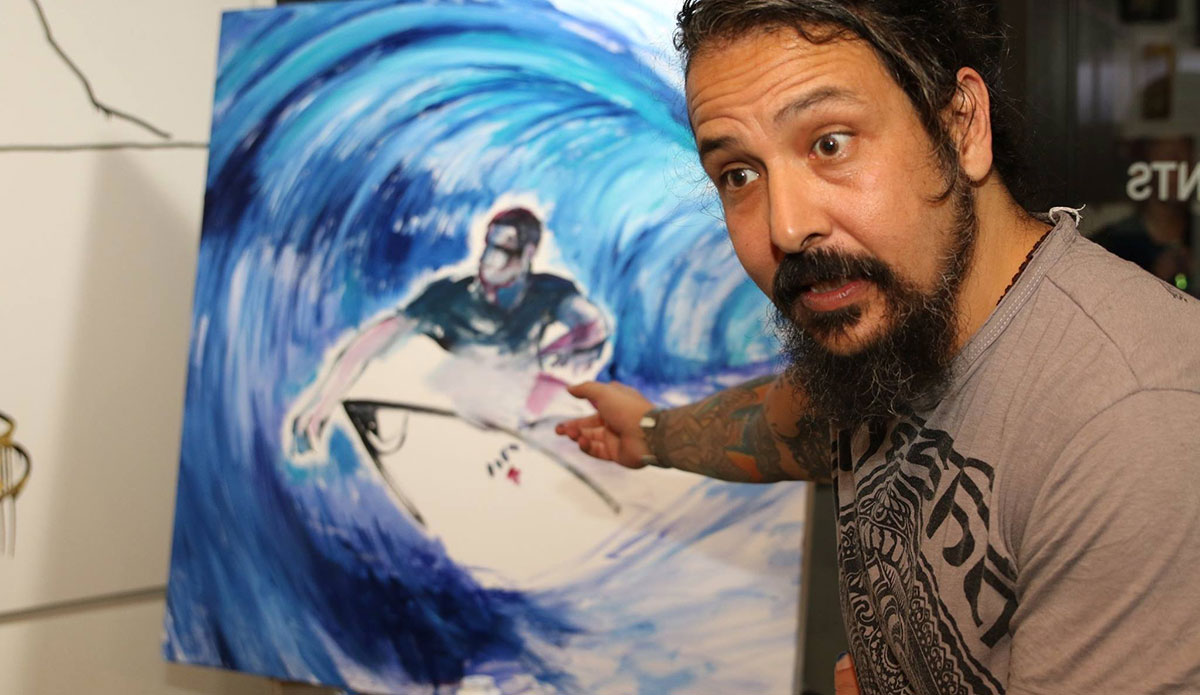 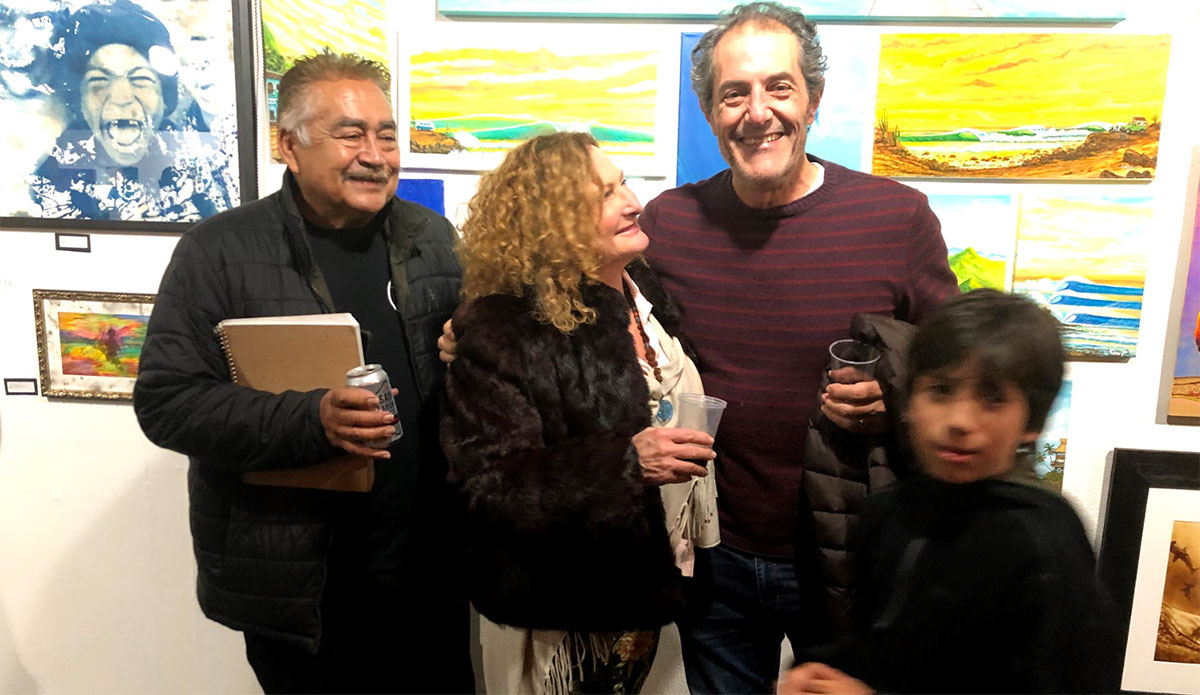 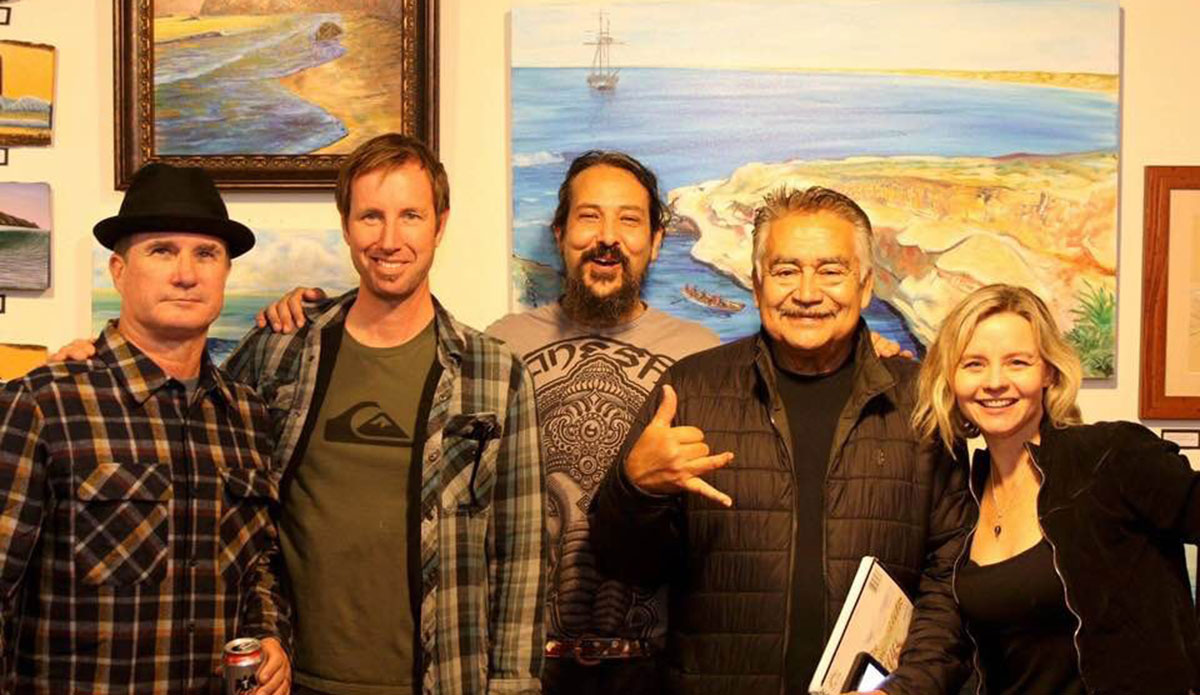 I have always been a huge fan of Christian Hosoi. When I was young, my brother Jonny was on the Jimmy’z longboard surf team. He and Christian both had this long, dark hair and they always wore black.

I thought we were related. He was a huge influence on me—I adopted the all black thing and felt like a Mexican Ian Astbury when I was jamming out in San Clemente back then with my old band Jesus Chrysler. God bless the eighties.

That was so great. I have completely forgotten about so many events, but I remember I met Christian at some rock show or something. I think Eddie Retagui and Christian were doing a skate demo. Music and art were always an outlet of the surf/skate culture, and no one knew that better than my mentor, Greg Escalante.

I traded a surfboard for a microphone, then traded the mic for a brush, and that was it for me. Recently I was part of a group art show in San Diego with a brotherhood of surf artists like Nathan Ledyard, Chuy Madrigal, Rick Blake, Nathan Gibbs, Bryan Helfand, Patrick Parker, and others. We all organized into a collective of ocean-minded artists working to bring awareness to environmental conservation under the banner of Ocean Stoke.

I was super stoked to be a part of a show at the Misfit Gallery in La Jolla and work with some guys I admire like Jay Celat and the 9th Wave Gallery in Hawaii.

My buddy told me they were thinking of doing this thing with Pops Hosoi and I was like, “oh that would be so sick.” One thing led to another, and I got the opportunity to do a live painting with Pops and reconnect with Christian. I am so incredibly inspired by their relationship and their energy in promoting positive actions and healing through Faith.

My dad and I were super tight. He really sacrificed a lot for me to be able to live that dream of the Paskowitz family with the freedom and sense of belonging that was so unique. He rejected social conventions and totally dedicated our family values to adhere to the Aloha spirit that he learned from Duke Kahanamoku at Waikiki. He thought that was more important than anything. When I see how Pops and Christian have traversed some of that same territory, I feel an amazing sense of gratitude and hopefulness for our surf/skate culture.

When we were younger, there was a pretty clear demarcation between the surf culture and the normies—it seemed like the fringe element in surfing presented a problem in the sense that, although it was a youth-driven aspirational sport, it wasn’t able to really be capitalized on because of the frightening gatekeepers who might enter into totally unexpected and misunderstood realms. I guess my family fell into that category. What I realized when Pops and I were working on our live piece was that the true cultural DNA has remained the same for all these years. Wave after wave of new influence has yet to fully eclipse the value of what the original founders discovered.

My dad said that, “there is a wisdom in the wave, high born and beautiful, for those who would but paddle out.” As I was learning about Pops’ background, I realized that there are a lot of similarities to the Paskowitz family. He’s a classically-trained artist who devoted his life to his kid and fostered his journey through the culture. It seems like the people who really devoted their whole being into the effort are the ones who ultimately made a fundamental impact.

I think that kind of purity also informed Christian’s epic style. You can’t fake that. His whole life was a manifestation of the expression in his art. He lived for it. That’s the big difference with how contrived and self-aware the environment is now.

As everyone was arriving, I met Pops and Christian and we talked a little story about mostly my brother Jonny, as he was the Paskowitz they hung out with most. I told them that Jonny and Duke Aipa were going to show up, and Christian shared a little story about Duke’s dad, Ben Aipa. He is the man who inspired some of the greatest surfers of all time. See, surfing and skating were all born from the same genetic pool.

“The swallow tail design was from Ben Aipa,” Christian said. “And the Hammerhead was part of the inspiration from Ben’s sting and swallow concepts.”

As Pops Hosoi and I started working on our live painting and Duke Aipa started coming to life on the canvas, I had a kind of awesome realization: we were all part of something truly valuable. We’re honoring the legacy of family, dedication and most importantly, authenticity. We were all part of the same surf family, founded by Duke Kahanamoku and our ultimate goal to preserve the Aloha Spirit that was handed down through the generations from father to son.

It’s such a humbling feeling to be a part of that.

I knew I had to share this beautiful feeling that the real living spirit was still moving through the world. We are all a part of it, everyone who has gone into the water wanting to blow their brains out and come in feeling like Maximus Meridias. Every parent who feels that indescribable thrill seeing their kid’s first wave, knowing that a lifetime of health and strength and community is on the horizon. Even surfing a lake or a river, or pulling a blue tarp over a skateboard… it’s inescapable. As soon as you’re involved, the zeitgeist starts creeping in.

So as we approach the advent of even more commercialization and mainstreaming, manifesting even greater interest and involvement (the Olympics, hello), remember that no one can go back in time and make this thing any less meaningful, raw, and real. As the culture progresses and expresses itself, the true organic roots will create new offshoots in art, music, and even on the environmental and political spectrum.