Atmospheric River Is Set to Dump Feet of Snow on the Western U.S. 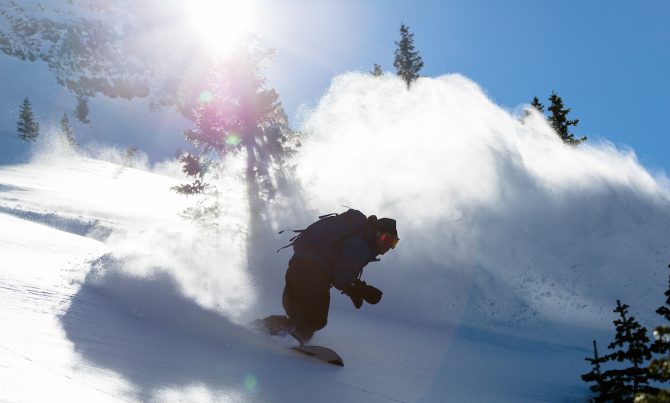 Forrest Shearer slashing some early-season snow in a Wasatch hidden gem. Utah’s favorite playground should get feet as well.

Over the next seven days, the weather across the West is expected to get real. As in real snowy. Forecasters are predicting feet of accumulation for the left side of the U.S., with ski resorts picking up significant storm totals. The storm is expected to come in warm, and go out cold. An atmospheric river, as they say.

“There is a train of systems nearly every 24-48 hours that are impacting the western U.S. currently,” wrote Powderchasers.com. “This should continue in earnest at least until early next week with unfortunate warm fronts followed by shallow cold fronts on the back end. This is the classic signature of an atmospheric river (warmer air and lots of moisture).”

As of this morning Mammoth Mountain is reporting a 26-inch storm total. Parts of the northern Sierra, like Palisades Tahoe, are reporting totals in the 20-inch range. In the Cascades, Mt. Bachelor has totaled 20 inches as well thus far.

The snow is expected to be heavy early with higher elevations (above 8,000 feet) obviously riding better. Parts of the interior Pacific Northwest like Idaho, picked up heavy snow before a rain event. Jackson Hole’s temps stayed in the right spot (20s) and the mountain was able to nab 10 inches from the storm.

Things aren’t expected to slow down.  This from Powderchasers:

“The extended forecast looks very deep with another parade of storms headed toward the Sierra and PNW.  The next system arrives late Thursday night into Friday with another due for the weekend into the New Year. In looking at temps they will likely follow similar signatures to the current system (7-8000-foot snow levels lowering with weak cold fronts). Models pump out another 3-4 feet by late this weekend. These systems will favor similar regions (Sierra, PNW, Idaho, and the four corners). There appears to be a cut-off low forming over the Pacific that might park itself for several days over the West. If this happens we could see additional feet of snow next week, especially for the Sierra.”

Yeah, it’s gonna be deep. Skiers and riders will need to be selective with where they ride as the upper elevations look best.