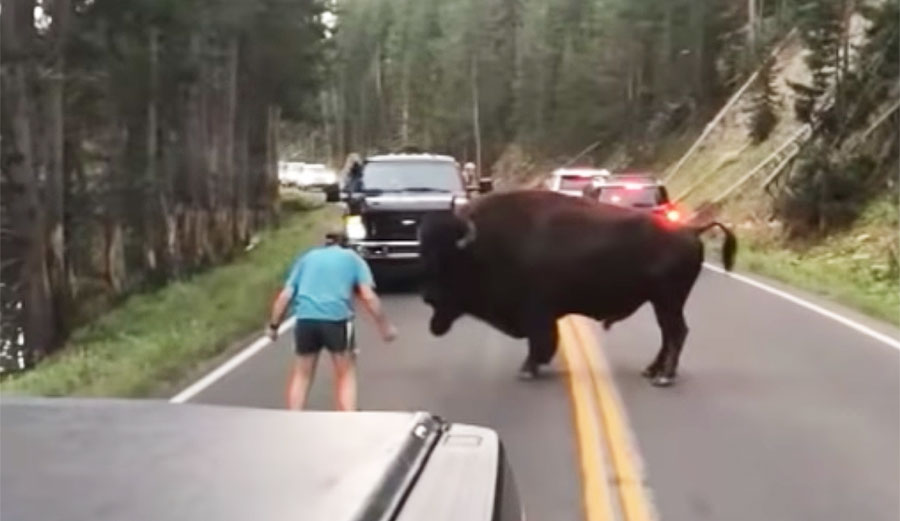 A 55-year-old man has been arrested after harassing a bison on the road in Yellowstone. The man, who authorities identified as Raymond Reinke, decided it was a good idea to lunge and flex at a full-grown bison while onlookers filmed. It was not. The encounter, however, was just one part of a strange few days for Reinke.

According to the New York Times, over the course of a week, Reinke had four confrontations with park officers. “The individual’s behavior in this video is reckless, dangerous and illegal,” Dan Wenk, Yellowstone’s superintendent, said in a Facebook post after the bison clip went viral. “People who ignore these rules are risking their lives and threatening the park experience for everyone else.”

Reinke is from Pendelton, Oregon, and had been traveling to different national parks for a few days. On July 28th, he was arrested at Grand Teton National Park for being drunk and disorderly. After spending the night in jail, he was released on bond. Soon after, he headed to Yellowstone National Park, where he was stopped by rangers. “Reinke appeared to be intoxicated and argumentative,” Yellowstone’s press release explains. “He was cited as a passenger for failure to wear a seat belt. It is believed that after that traffic stop, Reinke encountered the bison.”

That same evening, Yellowstone rangers located Reinke and gave him a citation for his interaction with the bison. A few days later, the Assistant U.S. Attorney watched the footage of the bison harassment, connected it to his previous run-ins with officials, and issued a warrant for his arrest.

On August 2nd, a few days after he was filmed at Yellowstone, he was arrested at Glacier National Park in Montana. Reinke was having a heated argument with a guest at a hotel dining room, and park rangers were called to the scene. The bar, according to reports, had decided to stop serving him. When rangers arrested Reinke, they realized there was a warrant for his arrest. They then took him to meet with the Yellowstone officials who promptly stuck him in a cell, thus ending his weird, drunken tour of national parks.

Court documents show that Reinke is looking at a handful of charges, including disturbing wildlife, being intoxicated to a degree that endangers himself or others, unreasonable noise, and keeping an open container of alcohol in a vehicle.