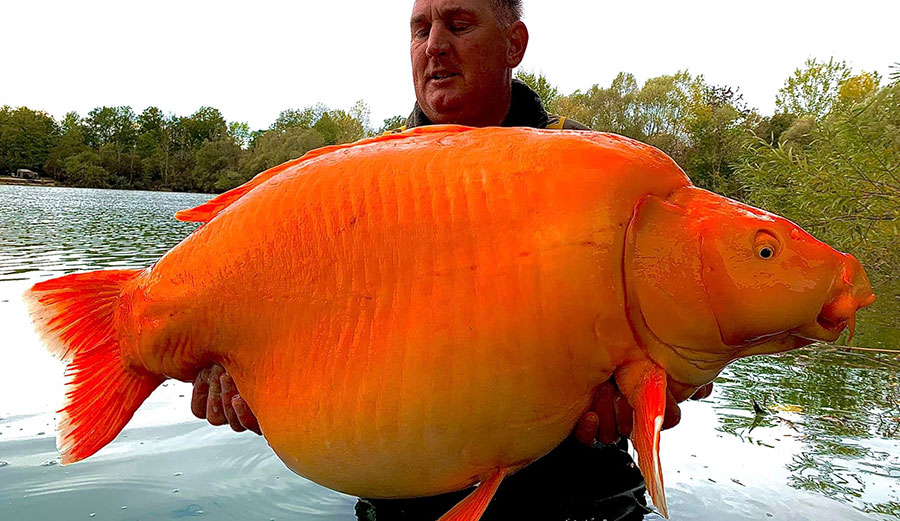 Carrot weighed in at a shocking 67 pounds. Photo: Bluewater Lakes/Facebook

Twenty years ago, a little carp-koi hybrid was dropped into a fishing lake in France called Bluewater Lakes. The goldfish was named, fittingly, Carrot. Over the years, Carrot grew and grew and grew until, finally, an angler pulled her out. And in those 20 years, Carrot had grown. A lot.

“We put Carrot in about 20 years ago as something different for the customers to fish for,” Fishery Manager Jason Cowler explained. “Since then it has grown but it doesn’t often come out. She is very elusive.”

Last spring, my fiancé and I bought a real trash heap of a house. It’s not a trash heap anymore, but when we moved in… well, suffice to say that my fiancé burst into tears. It’s on a decent parcel of land, and the day after we took possession, we discovered a tiny little pond filled with murky, dark water. We didn’t think too much about it until, a few weeks later, a friend looked at it and asked us if we knew we had a goldfish in there. We did not. The goldfish (Fred, named by another friend’s son) is much larger than usual, probably a solid eight inches long and sporting a big fat belly. Turns out that a goldfish’s size, to a certain extent, is dictated by the size of their home — the bigger the bowl, the bigger the goldfish. Fred spends most of his time in the shade of a large fern that hangs over his pond, ignoring the fish food I throw at him.

Now, Carrot is not strictly just a goldfish. There are many types of goldfish, but they’re generally just a golden domesticated carp. Koi fish, which grow much larger, are often hybridized with the carp, and that’s what’s in Carrot’s DNA.

The fisherman who caught Carrot is a 42-year-old named Andy Hackett. According to the Daily Mail, he spent nearly half an hour reeling her in, and when he finally landed her she weighed in at a little over 67 pounds.

“I always knew the Carrot was in there but never thought I would catch it,” he said. “I knew it was a big fish when it took my bait and went off side to side and up and down with it. Then it came to the surface 30 or 40 yards out and I saw that it was orange. It was brilliant to catch it but it was also sheer luck.”

Carp are a hardy fish. They can live and breed in conditions that aren’t exactly perfect, so releasing them into a place where they shouldn’t be isn’t a good thing. They love shallow-ish lakes and slow moving rivers, where cover and food is abundant. When it gets too cold, they find deeper water and enter a sort of hibernation phase. Depending on the conditions, as I mentioned, carp sizes can vary widely. In a tiny bowl in your living room, they’ll be a tiny carp. But in a lake like Bluewater, and when they’re mixed with a bit of koi? Well, you get a Carrot. It’s not just their size that varies, either — in a natural environment, they generally live about 15 years. But, amazingly, they’ve lived for over 200 years in captivity, at least according to Encyclopedia.com.

Afterwards, as you’re likely wondering, Hackett released Carrot back into the water. There’s no telling whether she will be caught again, but here’s hoping she spends the rest of her days getting bigger and bigger while she lives a long and healthy life, free of hooks in the mouth.