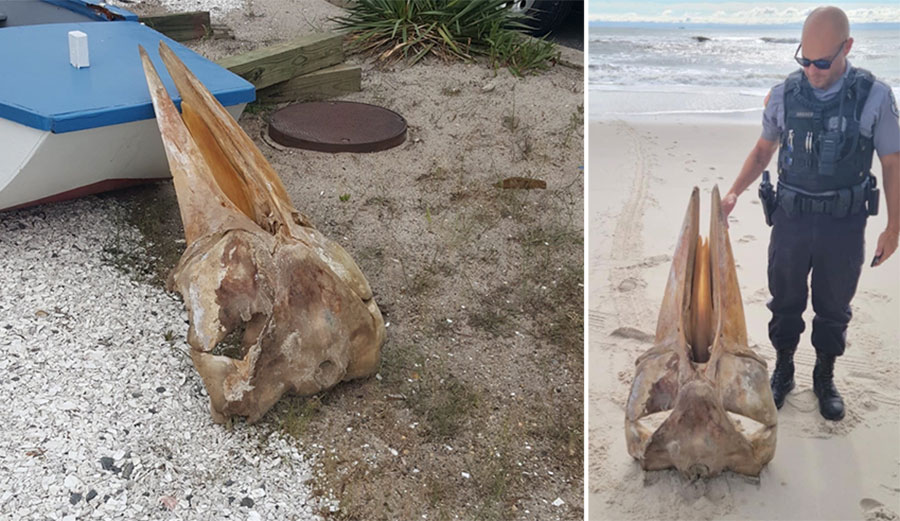 Big Bird, is that you? Please don’t let it be you. Photos: New Jersey DEP/Twitter

After a storm slammed the coast of New Jersey, a beachgoer found something very strange washed up in the sand. It was a giant skull of some kind, and even the New Jersey Department of Environmental Protection was confused. A mystery skull in the sand, after all, isn’t something they run across all that often.

The department turned to the internet for help but, as usual, the internet was… less than helpful. “You never know what you are going to find on the beach after a storm!” the department tweeted. “Our State Park Police found this skull at Island Beach State Park on Monday. As soon as we identify it, we’ll let you know. For now, do you have any guesses?”

Guesses ranged wildly, from “pterodactyl skull” and “Big Bird” to a “Donnie Darko-ish nightmare” and even “the seagull that steals my fries every summer.”

After a whole lot of non-helpful (but hilarious) answers, someone finally came to the rescue and ruined everyone’s fun. “I’m confirming that it is the skull of a minke whale (Balaenoptera acutorostrata),” wrote Joy Reidenberg, a comparative anatomist specializing in marine mammals, particularly whales, and particularly head and neck anatomy. She then went on to offer a home for the skull.

According to the National Oceanic and Atmospheric Administration (NOAA), Minke whales are part of the great whale family. Their population status is considered to be stable, although commercial whaling made things touch-and-go for a while. Not nearly as touch-and-go as it made things for other, larger whales, though. “Commercial whaling’s overexploitation of other larger whale species,” the NOAA explained, “may have allowed minke whales to prosper from the lessened competition and increased availability of food resources.”