Homes Are Collapsing on the Outer Banks, and It’s a Look Into What We Can Expect in the Future 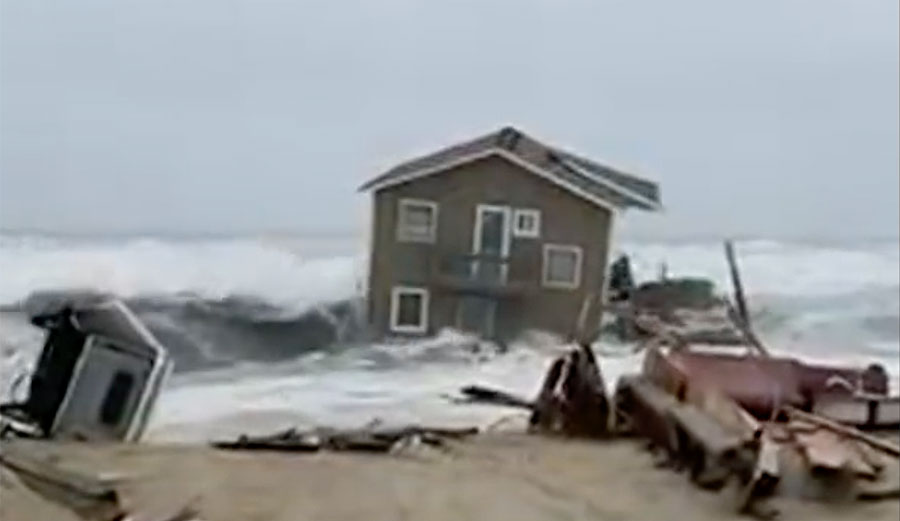 The collapse of the OBX home happened when the stilts it was built on were knocked out from under it. Photo: Screenshot/13 New Now

North Carolina’s Outer Banks is a staggeringly pretty area. The waves are insane, as surfers like Brett Barley have proven, and the ocean is a wild one. So wild, in fact, that two houses collapsed on May 10 after high water levels and beach erosion swept the legs out from underneath them. The Cape Hatteras National Seashore is warning that more homes could fall into the ocean in the coming months and years.

Both of the homes that collapsed were, luckily, unoccupied. Video that hit the internet shows one of the homes collapsing after waves knocked the stilts out from under it.

Just a few months ago, in February, another home in nearby Rodanthe also collapsed. In that incident, debris spread over miles of beaches. Officials are worried that the collapses could get worse, both in the short term and long.

“Unfortunately, there may be more houses that collapse onto Seashore beaches in the near future,” David Hallac, superintendent of the National Parks of Eastern North Carolina, said in a statement. “We proactively reached out to homeowners along Ocean Drive in Rodanthe after the first house collapse and recommended that actions be taken to prevent collapse and impacts to Cape Hatteras National Seashore.”

OBX is a popular tourist destination in the summertime, and part of the attraction are the stilted houses sitting on the sand. But with rising sea levels and the ever-increasing intensity of storms, many of them could be facing destruction.

According to reports, many coastal communities in the area have seen a large increase in tidal flooding. “The National Oceanic and Atmospheric Administration has noted that by 2030 there will be seven to 15 days of high-tide flooding nationally,” wrote CNN. “By 2050, the frequency increases to 25 to 75 days.”

Since the early eighties, North Carolina sea levels have risen about three inches. “Coastal erosion costs around half a billion dollars each year in the form of deteriorated structures and land that is lost to the rising ocean,” CNN continued. The Cape Hatteras National Seashore issued a warning in the days prior to the homes collapsing.

“The Outer Banks area is forecast to receive severe weather starting tomorrow, Sunday, May 8,” the organization wrote. “Coastal hazards may impact the area through Wednesday, May 11.”

Both houses that fell were determined to be unsafe and in danger of collapsing within the last few months.