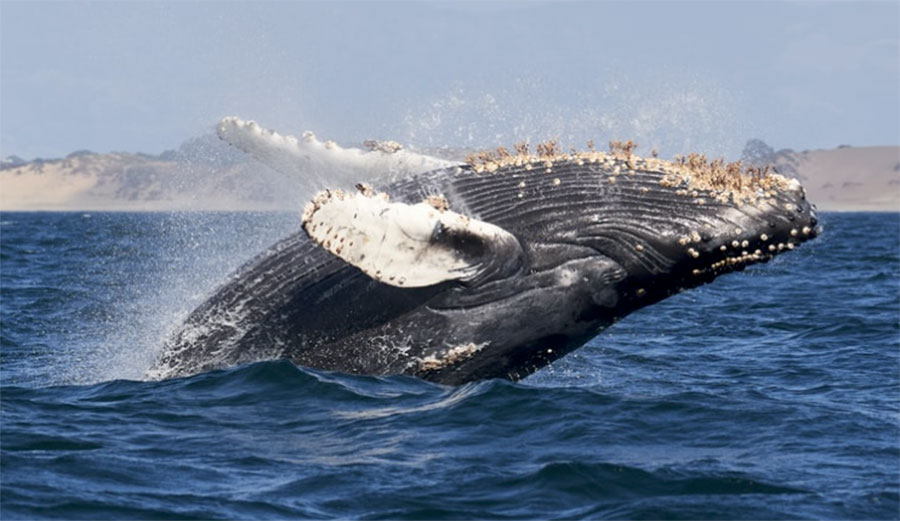 Michael Packard, 56, ended up in the mouth of a humpback whale on June 11th. Photo: Unsplash

Early in the morning on Friday, June 11, Michael Packard slipped off the side of his boat, the Ja’n J. It was his second dive of the morning off Herring Cove Beach in Provincetown, Massachusetts, and he was headed for the bottom in search of lobsters. What happened next, though, is straight out of the Bible. Incredibly, Packard found himself inside the mouth of a humpback whale.

The water was clear and about 60 degrees. Packard, who is 56, was wearing SCUBA gear as he dove towards the sandy bottom. Schools of fish flitted around him — sand lances and stripers, mostly — and the bottom was a mostly sand with the occasional rocky outcropping. When he was about 10 feet from the bottom, something hit him from behind.

“All of a sudden, I felt this huge shove and the next thing I knew it was completely black,” Packard told the Cape Cod Times after his release from a hospital in Hyannis. “I could sense I was moving, and I could feel the whale squeezing with the muscles in his mouth.”

At first, Packard assumed he’d been hit by a shark. Within a few seconds, though, he realized that he wasn’t injured, not seriously, and he couldn’t feel any teeth.

Lobster diver Michael Packard was swallowed by a whale off of Race Point this morning. Hear him describe being inside its mouth before the whale spit him out! Incredible story up next on #Boston25 at 6:30! pic.twitter.com/awJ2k4jIT9

“I was completely inside; it was completely black,” Packard continued. “I thought to myself, ‘there’s no way I’m getting out of here. I’m done, I’m dead.’ All I could think of was my boys — they’re 12 and 15 years old.”

Still breathing through his regulator, Packard began to struggle for his life. As per his recollection, he was inside the mouth of the whale for nearly a minute before the whale decided it didn’t like the taste of him. The whale surfaced and spat him out.

“I saw light,” said Packard, “and he started throwing his head side to side, and the next thing I knew I was outside.”

A crewman on the Ja’n J named Josiah Mayo was there to witness the extraordinarily unlikely event. He was on the scene when the whale released Packard back into the ocean. Mayo picked him up, radioed shore, and hit the gas back towards land. The Provincetown Fire Department ambulance met them on the beach and took Packard to the hospital.

It’s likely that the entire thing was just an accident. Humpback whales, of course, don’t feed on humans. “Based on what was described, this would have to be a mistake and an accident on the part of the humpback,” Jooke Robbins, director of Humpback Whale Studies at the Center for Coastal Studies in Provincetown, told the Cape Cod Times.

Mayo said the whale was medium-sized, which makes it likely that it was a juvenile feeding on sand lances. Humpbacks have a balloon-like mouth that expands when it opens to suck in water and fish, and Packard just so happened to be unlucky enough to be in the way. Although their mouths are large, the throat of a humpback is too small to swallow a human.

“It is not something I have heard happening before,” Robbins continued. “So many things would have had to happen to end up in the path of a feeding whale.”

Packard is expected to make a full recovery. The only remnant from the event is one incredible story.