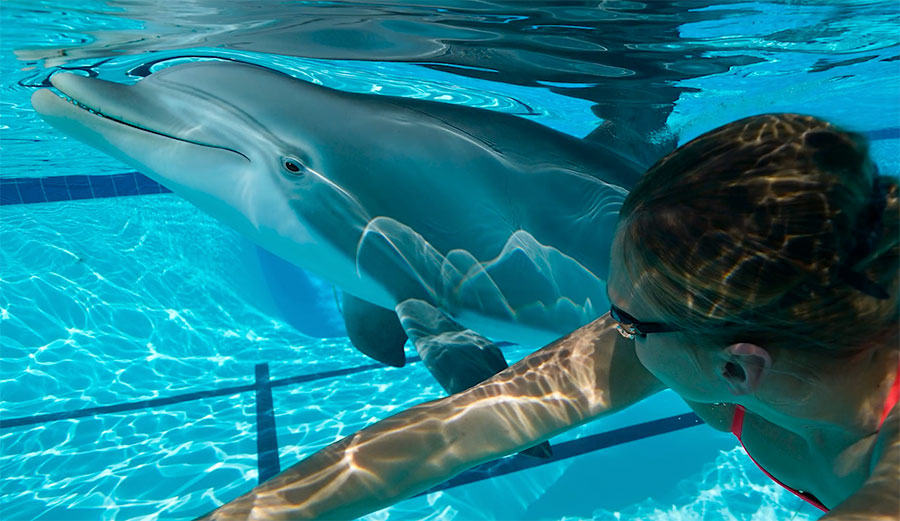 Keeping wild animals in captivity sucks. Dolphins, whales, lions, tigers, etcetera, whatever the animal, it shouldn’t be living in a cage. That’s why the same company that made Flipper from Flipper and Willy from Free Willy is making incredibly realistic animatronic dolphins that could change the marine park industry forever.

It’s a complicated thing. There are plusses and minuses — on one side, some might argue that having access to a few individual animals increases our appreciation for the species as a whole. We see them in a pool or a cage, realize how incredible they really are, and then, with any luck, we feel a little more empathy for, say, a turtle with a straw jammed up its nose.

SeaWorld in particular went through a few years of having its feet held to the fire. Someone once offered the SeaWorld folks a cool million dollars to release Tilikum the orca into a sanctuary. Back in 2015, the Sea World accountants released the numbers, and it became apparent that the company was crashing and burning.

The film Blackfish, released in 2013, basically knee-capped the whole outfit. By 2016, SeaWorld appeared to have given into public pressure and said they’d quit breeding whales in captivity and temporarily stop all shows. That meant no more whales and dolphins jumping through hoops for a floppy, dead herring.

Like I said, though, it’s complicated. Whales, dolphins, and most other creatures born into captivity can’t simply be thrown back into the sea or the jungle or the African savanna. Sure, there are a few ideas — enormous sea pens that would (hopefully) ensure the whales and dolphins and whatever else wouldn’t be able to go forth and die in the vast ocean that should’ve been their home.

As far as I can see, the only thing that’s really going to fix this — and this is depressing as shit — is to stop any and all captive breeding, release the captive animals into sea pens, and simply wait for them to die of natural causes. We can scrap SeaWorld, as far as I’m concerned.

I went to a zoo about a year and a half ago. My lovely little niece wanted to go, so off we went. Bored bears playing with old tires behind chain link fences. The saddest coyote I’ve ever laid eyes on, mangy and lying listlessly on its side. A bobcat with three legs. Eagles that couldn’t fly. This particular zoo was a place for injured animals that simply couldn’t make a go of it in the wild anymore, which is okay by me.

But places that keep animals simply so we can ooh and aah and marvel at the fact that we humans, with our thumbs and big brains, can smash a massive wild animal into a little pool and make it jump through hoops? Nah.

So let’s talk animatronics. Sure, everyone loves to hang out with a dolphin. They’re cute as shit, after all, and there’s something inside of us that makes us want to feel a connection with other creatures. People are still hungry to interact, but people have also woken up to the fact that in order to have that kind of interaction, we have to basically kidnap some poor creature. Enter Edge Innovations and its project, Dolphin Spirit.

Edge wants to reimagine the marine park industry and change the future for these social and intelligent animals. “As captive marine mammal shows have fallen from favor; and the catching, transporting and breeding of marine animals has become more restricted, the marine park industry as a viable business has become more challenging – yet the audience appetite for this type of entertainment and education has remained constant,” reads the Edge Innovations site. “Real-time Animatronics provide a way to reinvent the marine entertainment industry with a sustainable, safe, and profitable future.”

Judging from the promotional video, which you can see a few paragraphs above, the Dolphin Spirit project is very realistic. It’s a blend of live puppeteering, programmed behavior, and artificial intelligence, and it makes for a dolphin that — in the video, at least — is nearly impossible to distinguish from a real one.

“This is the most important aquarium development in the past decade,” said Hank Armstrong, Former VP of the Monterey Aquarium.

Dolphin Spirit, however, isn’t quite a reality just yet. Edge Innovations is currently developing its first pilot attraction, which is slated to open to the public in the summer of 2022 — just so long as (knock on wood) some wild pandemic doesn’t shut down the globe.

Whatever happens, and although a dolphin robot won’t ever be as good as the real thing, the Dolphin Spirit project is surely better than what we’ve got going on now. Sometimes, you can’t always get exactly what you want. And if you want dolphins to be held in captivity for your selfish entertainment… well, it’s time to rethink some things.