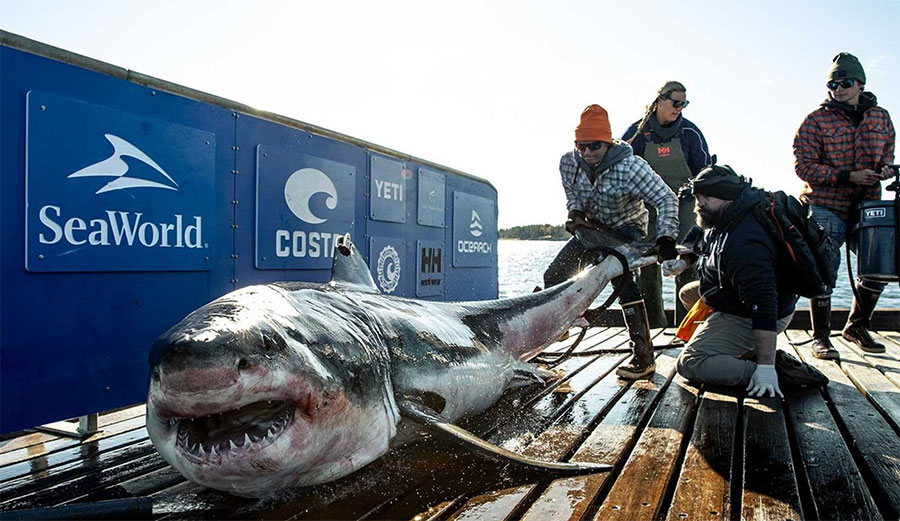 OCEARCH caught and tagged Ironbound off the coast of Nova Scotia in 2019, and he wasn’t too happy about it. Photo: OCEARCH

Back in 2019, a nonprofit marine research group tagged a great white shark off the coast of Nova Scotia. It wasn’t just any old shark, though — it was a shark that weighed nearly 1,000 pounds. And recently that shark, dubbed “Ironbound,” was spotted off the coast of North Carolina.

Ironbound, named after West Ironbound Island near Lunenburg, Nova Scotia, measures in at 12 feet, 4 inches long, according to OCEARCH, the research group responsible for the tracking tag. Ever since they first tagged him, the group has been tracking his movements in an effort to understand more about sharks’ migratory patterns. Every time a tagged shark’s fin breaks the surface, its location is shot over to OCEARCH, where it’s recorded and used to figure out how and where sharks move throughout the ocean.

The most recent ping hit OCEARCH systems at 12:43 p.m. on May 10. It looks as though he is heading south, although it’s common for great white sharks to move north in spring and early summer.

“Sometimes, they take a shot at it because maybe once out of every 10 years it’s warm enough up there where they can move in and eat seal starting a month early,” Chris Fischer, founder of the nonprofit research group Ocearch, told TODAY. “He is a determined, young, mature male trying to make his way in the white shark world, and he has the attitude to do so.”

Since 2019, Ironbound has tacked on some serious miles. He’s gone some 13,000 of them, from Canada to the Florida Keys. And while he’s certainly tipping the scales, Ironbound is nowhere near the biggest one in the ocean. Sharks, as you know, are extraordinarily important when it comes to maintaining a healthy ocean ecosystem, so it’s important that we understand as much as possible about them.

“Well, they manage the ocean system and if the ocean system’s not working, we die,” Fischer explained. “And these guys are the system managers. So if they thrive, we thrive.”