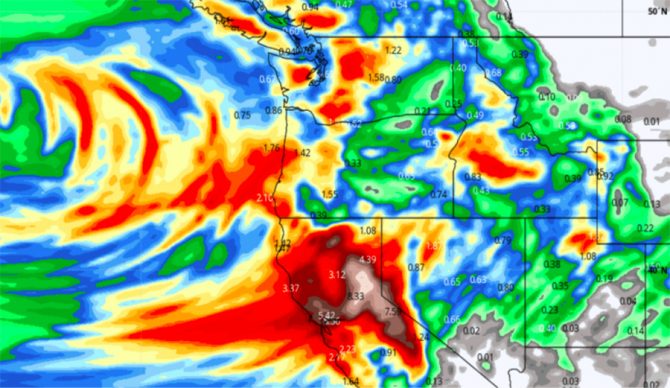 Real winter is about to set in for the Sierra Nevada as a “train of atmospheric rivers” is forecasted to dump several feet of snow on the mountain range during the next week. According to PowderChasers.com, three separate atmospheric rivers – bodies of moisture that actually resemble moving bodies of water – will run through the Western U.S.

“By the middle of next week, snowfall totals could be substantial enough for some resorts to bump up their opening dates,” wrote the winter storm prediction site. “Right now, the bullseye is on the Sierra, where several feet of snow are likely.”

PowderChasers stopped short of predicting exact depths but made some educated predictions. First, the initial AR will be the most powerful. Storm totals look impressive with  2-15 inches of rain in lower elevations and snow accumulation ranging from 0 to nearly 70 inches. That’s right, there are models that show the Sierra getting six feet of snow if everything goes well. ARs are generally warmer so snow levels will be high, at least initially. This is a strong series of storms, though.

And these storms won’t just impact California, either. Utah, Idaho, Wyoming, and Colorado are all set to get significant snow totals. “This trio of ARs will deliver desperately needed water to California, much needed snowpack in the Sierra, and widespread significant snow and rain to the Western U.S.,” reads PowderChaser’s release. “Let us all hope this forecast remains intact.”

Find out more at PowderChasers.com.