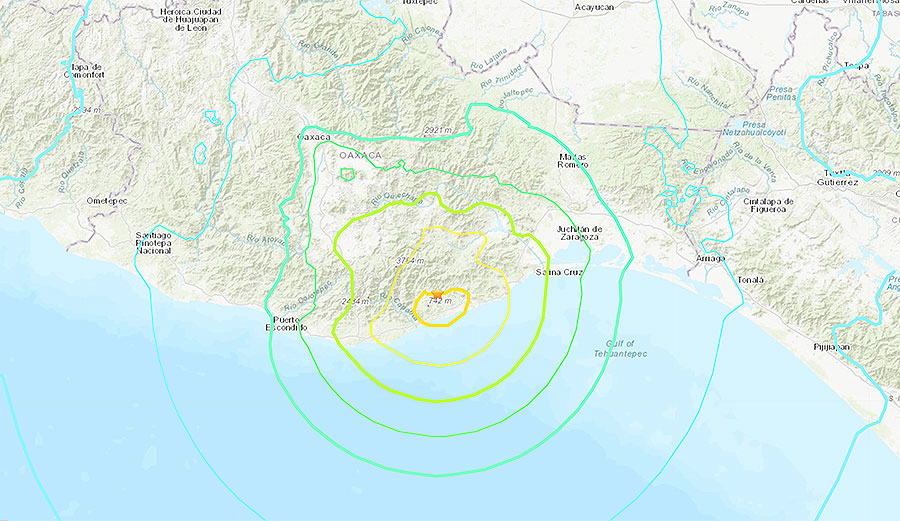 The earthquake struck on Tuesday morning and measured 7.4 on the Richter scale. Image: USGS

An earthquake measuring 7.4 on the Richter scale shook southern Mexico on Tuesday morning, setting off the alarm for authorities to warn residents of possible tsunami waves.

The earthquake, which struck at 10:30 a.m. local time, had its epicenter in El Coyul, a three-hour drive east of Puerto Escondido and just half an hour from Barra de la Cruz. According to reports, it was felt all over Central America, including Guatemala, Honduras, and El Salvador. Tsunami warnings have been issued for the coasts of Mexico, Honduras, Guatemala, and El Salvador.

“I was actually walking over the sand dune and looking back at the waves when it hit,” Mark “Buggs” Arico told The Inertia. Arico runs the Punta Conejo Resort in Salina Cruz. “The entire sandhill was shaking and rocks from the adjacent hill were starting to fall. It was very eerie.”

According to reports, Oaxaca Governor Alejandro Murat told local news outlets one person was killed in a building collapse in Crucecita. “No-to-little damage at Conejo,” Arico continued, “but north of here in Huatulco and the surrounding communities have received damage and one fatality was reported. It also appears the tectonic plates may have risen in Huatulco by a couple of meters in the surrounding beaches of Huatulco… No tsunami at this point, and unlikely.”

Breaking: Video from Mexico City shows buildings shaking during magnitude 7.4 earthquake. At least one person died after the earthquake. pic.twitter.com/ShEi3EuKp4

Early estimates from USGS of the earthquake’s damage “suggest that localized casualties and damage are possible but there are likely to be fewer than 100 fatalities and less than $100 million in damage.”

Mexico is one of the most seismically-active zones on earth. Sitting on three tectonic plates, the frequency of earthquakes is relatively high, but most of them are slight. In 2017, Mexico was struck by two earthquakes in just weeks. The first, which had a magnitude of 8.1, hit on September 7 and killed nearly 100 people. Less than two weeks later, on September 19, another occurred, this one measuring 7.1 and killing at least 225 people.

“Most of the Mexican landmass is on the westward-moving North American plate,” the USGS explained. “The Pacific Ocean floor south of Mexico is being carried northeastward by the underlying Cocos plate. Because oceanic crust is relatively dense, when the Pacific Ocean floor encounters the lighter continental crust of the Mexican landmass, the ocean floor is subducted beneath the North American plate creating the deep Middle American trench along Mexico’s southern coast. Also as a result of this convergence, the westward-moving Mexico landmass is slowed and crumpled creating the mountain ranges of southern Mexico and earthquakes near Mexico’s southern coast.”

This is a breaking story and will be updated as more information becomes available.