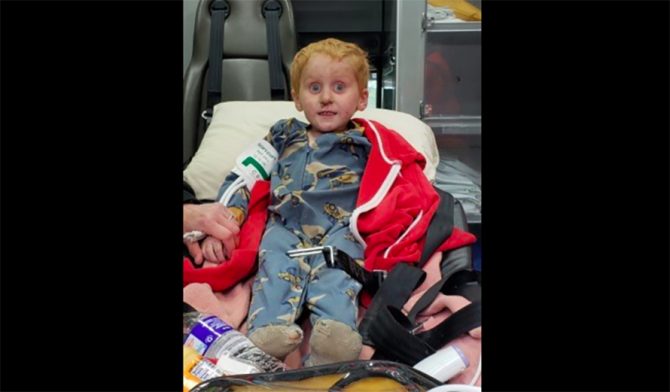 On the afternoon of Friday, June 3, a three-year-old boy went missing in the woods in northwest Montana.  At just before 5 p.m., Lincoln County Sheriff’s Office received a call from a neighbor who was concerned that the boy could be missing. Two days later, on June 5, Ryker Webb was found by officials. Amazingly, after two full days alone in the wilderness, he was “in good spirits and apparently healthy, although hungry, thirsty, and cold.”

According to reports, Webb was last seen that afternoon of Friday, June 3. He was playing with his dog in the yard outside his house, just south of Troy, Mont. Deputies were able to determine that, at the time of the call, he’d been missing for two hours already. They immediately dispatched crews to begin searching the area. Ground crews, ATVs, drones, and dog teams were all deployed, as well as a boat crew to search a nearby lake. Two planes were also dispatched to aid in the search but were forced to call their efforts off due to inclement weather.

The next day, two Montana Air National Guard helicopters and drones from Flathead County and the Spokane Police were able to respond. More dog teams were added and the ground crews and ATV teams continued combing the woods. Bad weather still hindered search parties and was a serious cause for concern about the child’s welfare. The temperature fell into the low 40s in Missoula on Saturday night, with a quarter-inch of rain hitting the ground. On top of the weather, the area is full of dense underbrush. Deputies issued a Code Red Alert to everyone in the vicinity, requesting that they search houses and yards for any sign of the boy. A missing persons report was sent out nationwide, and the search intensified.

By Sunday, two days after Webb was first reported missing, 53 people were searching the surrounding area, including search and rescue teams, volunteer fire departments, and EMT units from the northwest Montana and northern Idaho regions. A large group of experienced outdoorsmen and families also responded. It was a full community effort. Incredibly, they found Webb. When deputies responded to a call that search parties had potentially located him, they were able to confirm that it was, in fact, the missing three-year-old.

Bull Lake Volunteer Ambulance Service assessed the boy, then took him to Cabinet Peaks Medical Center for evaluation. He’s expected to make a full recovery — but he’ll likely have a  close eye kept on him for the foreseeable future.