Prehistoric Predator Skeletons Discovered In an Underwater Cave In Mexico 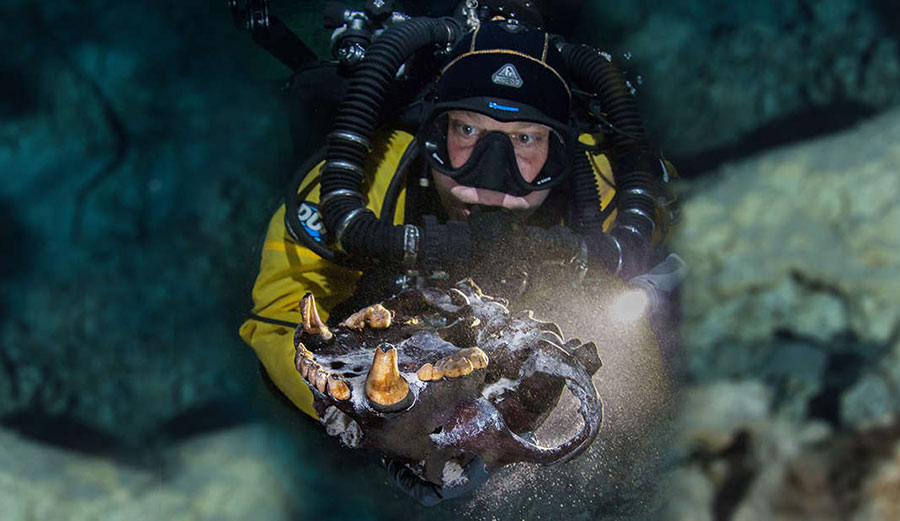 Divers in a Mexican cave found something pretty incredible nearly 200 feet below sea level: the skeletal remains of predators from the Ice Age that died somewhere around 11,000 years ago.

The cave, called Hoyo Negro, is located in the Yucatan Peninsula. Since the climate there is generally too warm for things to stick around for very long, most of Mexico and Central America don’t hold a whole lot of geographical evidence. But since this particular cave acted as a temperature trap, it holds a wealth of information that comes in the form of skeletons of creatures unlucky enough to plummet to their deaths. One of them, in fact, is Naia, a teenage girl who died at the age of 17, around 13,000 years ago. She is the oldest complete skeleton ever found in the Americas. Also included in the extraordinarily deep grave are “saber-toothed tigers, cougars, tapirs, ground sloths, and elephant-like gomphotheres,” among other things.

According to IFLScience, it’s likely that the two new animals found in the cave are an Ice Age bear called Arctotherium wingei and a carnivore that resembled today’s wolves known as Protocyon troglodytes. They fell some 197 feet to their deaths. At the time, the cave system was dry, but as the Ice Age warmed up, the cave filled up with melting glacial water that kept their bones in relatively good condition for 11,000 years. The bear is thought to be the largest that ever walked the earth.

“Typically as a paleontologist, if I’m going on a caving trip looking for ice age animals, I’m lucky to find a tooth,” Blaine Schubert, one of the divers, told New Scientist. “This pit had a lot of animal remains. The divers didn’t have to do any digging. These animals were just laying on the surface, and some have been there for 30,000 years.”

The discoveries add new information to the ever-changing portrait we’re painting of life in the past. Both the wolf and the bear weren’t thought to have made it out of South America. Somewhere around 3 million years ago, a land bridge joined then-separate North and South America. Animals slowly made their way north or south to new places, then slowly evolved into entirely new species, so the discovery of their bones in Mexico surprised researchers.

“Both genera were previously thought to be indigenous to and confined to South America and appear to represent an instance of large placental mammals, descended from North American progenitors, migrating back north across the Panama Isthmus,” wrote the authors of a study on the discovery. “This discovery expands the distribution of these carnivorans greater than 2,000 km outside South America.”