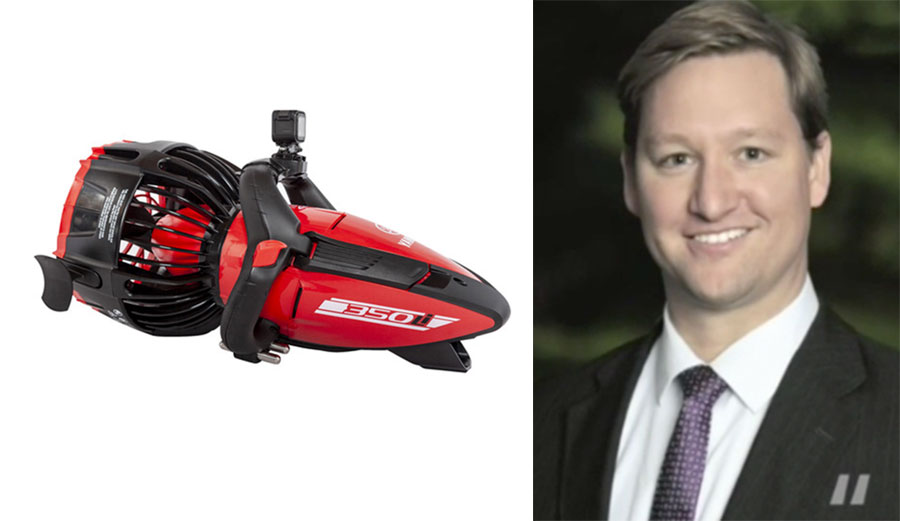 Matthew Piercey was wanted by the FBI for his alleged role in a Ponzi scheme, and he chose a strange getaway vehicle. Photos: Yamaha/CBS Sacramento

In early November, Matthew Piercey was indicted by a grand jury for his role in an alleged Ponzi scheme worth somewhere in the neighborhood of $35 million. But when FBI agents showed up at his house to slap the cuffs on him, Piercey decided he wasn’t going down without a fight. A weird fight, but a fight nonetheless.

According to reports, Piercey used a sea scooter to try and evade the officers. A sea scooter is one of those little underwater propulsion devices that a diver hangs onto as they get towed around. Running from the cops with one actually sounds sort of James Bond-ish — until you realize that sea scooters only go around four miles per hour and the cops just had to follow his slow-moving bubbles until Piercey resurfaced.

After agents went to arrest Piercey near Redding, California, he jumped in his pickup truck and led the officers on an off-road car chase. When he ended up at Lake Shasta, he abandoned his truck, grabbed the sea scooter, and disappeared into the lake. “Piercey spent some time out of sight underwater where law enforcement could only see bubbles,” federal prosecutors wrote in court documents. “He remained in the frigid water for approximately 25 minutes.”

The sea scooter — a Yamaha 350Li — allowed Piercey to travel around in the lake, likely assuming he was pulling the fastest of fast ones. It’s not entirely clear how he was able to stay under for nearly half an hour, but when he resurfaced, the FBI was waiting with the handcuffs. Medics checked him for hypothermia, let him put on dry clothes that the FBI had somewhat embarrassingly gotten from Piercey’s wife, and then handed him over to authorities.

Piercey, who is 44, was indicted with his 67-year-old business partner, Kenneth Winton. It’s alleged they convinced investors to dump $35 million into two companies, Family Wealth Legacy and Zolla. They promised returns using something called an “Upvesting Fund” that, they said, was an “algorithmic trading fund with a history of success.” According to prosecutors, Piercey allegedly admitted that there was no Upvesting Fund.