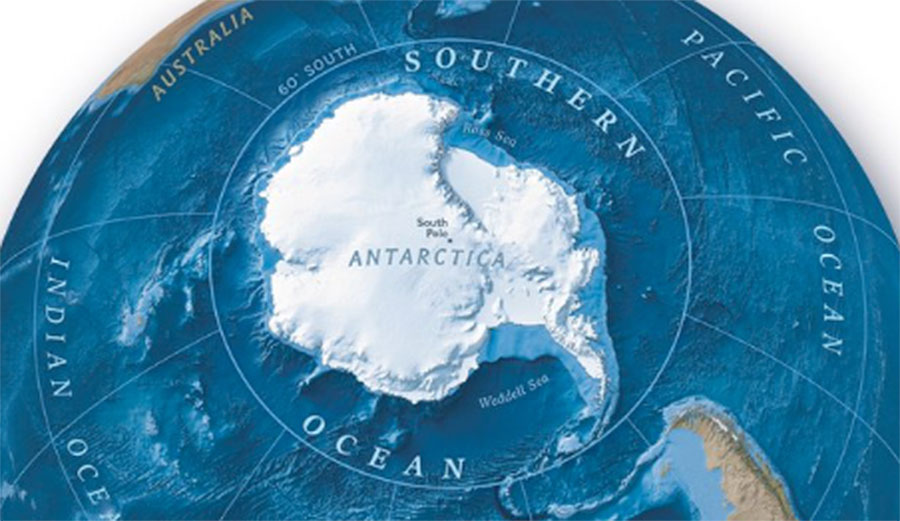 Somewhere around 34 million years ago, a current began to form around Antarctica. Over time, it gained enough steam to create a colder barrier of water that is less salty than the rest. When humans noticed it, we gave it a name: The Antarctic Circumpolar Current. For a long time, it’s also been known as the Southern Ocean, but it wasn’t officially recognized as an ocean like the Atlantic, Pacific, Indian, and Arctic. But now, thanks to National Geographic, the Southern Ocean is officially on the map — literally.

The Southern Ocean is unlike anywhere else on Earth. “Anyone who has been there will struggle to explain what’s so mesmerizing about it,” says Seth Sykora-Bodie, a marine scientist at the National Oceanic and Atmospheric Administration (NOAA) and a National Geographic Explorer.  “But they’ll all agree that the glaciers are bluer, the air colder, the mountains more intimidating, and the landscapes more captivating than anywhere else you can go.”

The Southern Ocean is a violent place. It’s where many of the massive swells that run into Teahupoo and Cloudbreak are born. In 2017, a wave of nearly unheard of proportions was measured there. Not only does it look different, the Antarctic Circumpolar Current is extraordinarily important to the Earth’s climate. It transports more water than any other current in any other ocean, sucking in water from the Atlantic, Pacific, and Indian Oceans. It’s a driving force behind the global circulation system called the conveyor belt, which moves warm waters all over the planet.

In 1999, the U.S. Board of Geographic Names approved the name Southern Ocean. Although everyone already called it that, it felt a little more official. Then, the next year, the International Hydrographic Organization (IHO) had a look at the proposed boundaries of it, but no one could agree on where it really stopped and started. For more than two decades, the Southern Ocean just kind of sat there, officially undefined. In fact, it was only in February of 2021 that the the National Oceanic and Atmospheric Administration (NOAA) decided that they too would officially recognize the Southern Ocean.

“Historically, there are four named oceans: the Atlantic, Pacific, Indian, and Arctic,” the NOAA explained. “However, most countries — including the United States — now recognize the Southern (Antarctic) as the fifth ocean. The Pacific, Atlantic, and Indian are the most commonly known. The Southern Ocean is the ‘newest’ named ocean.”

Four oceans or five? It’s #WorldOceansDay🌊 and National Geographic is making a change to recognize the Southern Ocean as a fifth official ocean in our atlases and maps! https://t.co/HSHRUAyWuE

“The impacts of industrial fishing on species like krill and Patagonian toothfish (which is marketed as Chilean sea bass) has been a concern in the Southern Ocean for decades,” Sarah Gibbens wrote for Nat Geo. “In 1982, catch limits were imposed in the region. The largest marine protected area (MPA) in the world was established in the Ross Sea off West Antarctica in 2016.  A number of organizations are working to set aside more MPAs to protect the Southern Ocean’s most critical feeding grounds, for example off the Antarctic Peninsula.”

Although the Southern Ocean has been around for 34 million years and it’s just now been officially added to the map, its future is a little uncertain. The water around Antarctica is rapidly heating up and the ice sheets are melting. The effects these changes might have on the Southern Ocean are, so far, unknown… but we might find out soon enough.