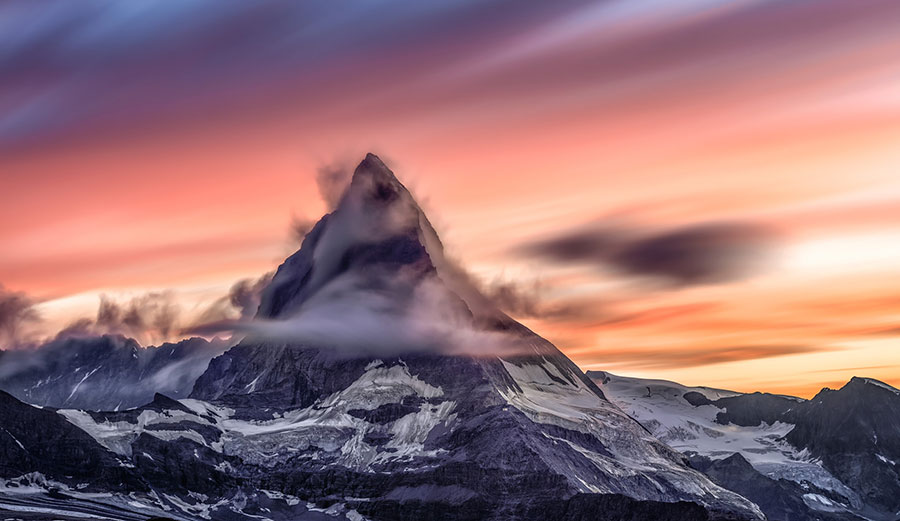 The Matterhorn is cracking up. Literally. Photo: Samuel Ferrara

The Matterhorn is one of the world’s most iconic mountains. Sitting in the Alps between Italy and Switzerland, its majestic peak is everywhere from Disneyland to Toblerone chocolate’s packaging. But, according to new research, thanks to our rapidly-warming planet, it’s cracking up. Literally.

A team of researchers from ETH Zurich, a university in Switzerland, installed 50 movement sensors at 13,000 feet to figure out exactly how a mountain that’s used to being under the weight of tons of ice deals with the sudden loss of it. The results showed that cracks are showing up all over the Matterhorn and they’re spreading fast.

“Cracks expand and move,” Jan Beutel, a member of the ETH team, told The Times. “Many continue to move in the same direction every year and then at some point it’s too much and a small scale of the surface breaks off. If there were more ice in place – as in the good old mountaineering past – it wouldn’t be that bad, since the ice cover would still hold these pieces together.”

Over the last century, temperatures in the Alps have increased at nearly twice the global average—a little under 4°F over 120 years—causing a whole host of problems. And, since precipitation is dropping at the same time, there’s less snow at high altitudes, which results in less groundwater down the road.

As it stands, the Matterhorn isn’t about to collapse, but there are still dangers that stem from the loss of ice. If the glacier disappears, that permafrost beneath it will thaw. That, of course, leads to instability and landslides, which poses a real threat to those living in the mountain’s shadow.

“When the high mountains thaw in summer, the stiffness decreases and the ground sediments get soggy and wobbly with water,” Beutel continued. “Think stracciatella ice cream with much more chocolate chips than vanilla ice cream.”

The Matterhorn’s ice problem is not limited to just the iconic peak, either. According to The Smithsonian, “a study published last year found that by 2060 Switzerland will have a climate akin to Mediterranean countries.” Since 1850, the glaciers in Switzerland have lost 60 percent of their volume since the mid-1800s, and it’s not slowing down.