On Friday, July 24, the San Onofre Nuclear Generating Station (SONGS) is releasing radiological effluent into the waters just over a mile from the shores of San Onofre State Park. The release will take about four hours.

You’re probably aware that the San Onofre Nuclear Generating Station sits right on one of Southern California’s most popular beaches. Now, nearly four million pounds of spent nuclear fuel just sitting there on the Pacific Ocean, right next to a major highway, on top of a fault line, with the hustle and bustle of L.A. to the north and San Diego to the south, might seem like cause for concern. And that’s because it is.

SONGS has long been the source of major controversy. Back in the late seventies, about a decade after it was built, over a 1,000 anti-nuclear protesters gathered to challenge the construction of units two and three – the generators known today for their similarity to the female anatomy. You know the ones: they’re the boobs. Just a few years later, in 1982, some 15,000 people protested in Laguna Niguel, because let’s face it, no one actually wants to live next door to a nuclear power plant. And now, since its decommissioning process, there are a whole lot of people concerned about where that spent nuclear fuel is being stored. That’s because it’s being stored basically on their doorstep. It’s a complicated subject though — moving it isn’t all that easy, either, nor is finding a place to move it to. But this is about the 21,168 gallons of treated wastewater and radiological effluent being released into the water a mile away from a bunch of people splashing around in the sea.

Thanks to the Surfrider Foundation, Southern California Edison agreed to provide release notifications to the public (something the company should have already been doing, it seems). “The goal,” wrote Surfrider, is to keep the local beach-going and surf community informed about what effluent and potential hazards are posed by actions at the local nuclear plant.”

It should be noted that Edison says it treated the effluent to a radiological dose level of just 0.00132 mrem which is well within its legal allowance set by the Nuclear Regulatory Commission. Still though, Surfrider — and many others — are happy that at least they’re informed enough to make a decision before going to the beach on a sunny Friday in late July. 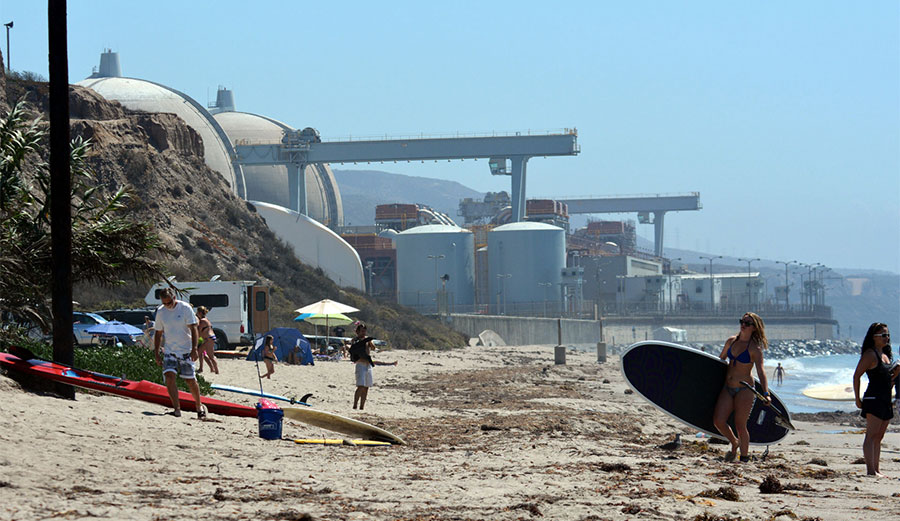 On Friday, July 24, a liquid batch release of radioactive effluent is being released into the waters 1.1 miles offshore. Photo: Wikimedia Commons

Edison, on its Liquid Batch Release Notification page, has a few answers to a few commonly asked questions. The first, and most obvious, is whether a person in the water at San O is at risk. “No, and here’s why,” Edison explains. “First, the dose is already small to begin with, diluted in thousands of gallons of water. Once released to the ocean, it mixes with vast quantities of ocean water. This serves to further dilute the discharge and reduce the dose below measurable levels. Second, radiation exposure to humans is based on pathways, the routes by which radioactivity might be transported. The primary pathway for liquid releases would be eating seafood (fish, crustaceans) that might accumulate radioactive material. There is no drinking water pathway for SONGS since there is no potable water near the site.”