Thousands of ‘Penis Fish’ Washed Up on a Beach In California 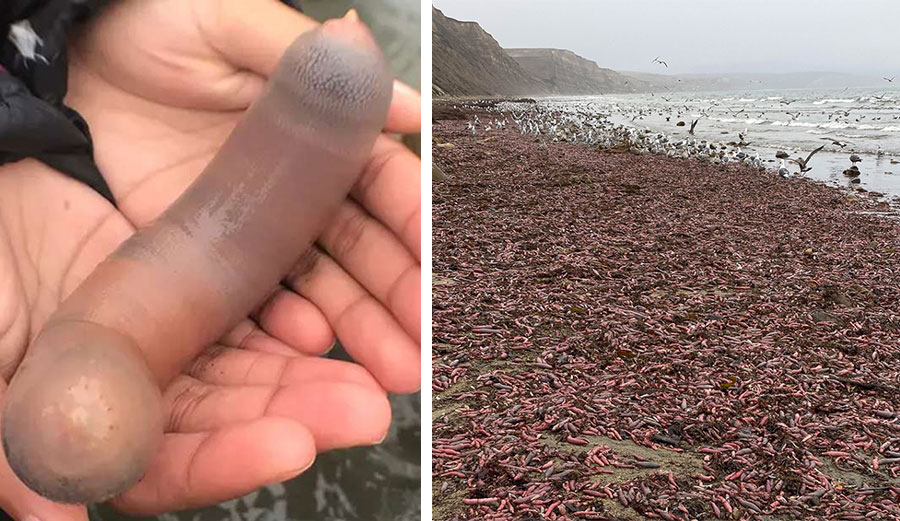 One such man who headed to Drakes Beach last week was David Ford, a local resident. “I had no idea what they might be… it went on for two miles,” Ford told Vice. “I walked for another half hour and they were scattered everywhere. There were seagulls lined up the beach the whole way having eaten so much they could barely stand.”

Ford snapped a few pictures — which could look very suspect if officials were ever to get a hold of his camera roll — and sent them to Bay Nature‘s “Ask the Naturalist” column. “I saw thousands of these on Drakes Beach on Dec. 6, after the recent storm,” Ford asked. “What happened?”

The reason we don’t often see the penis fish is because, ideally, they spend most of their penis-shaped lives living in burrows. They make a little u-shaped home, slurp themselves into it, barf out a gross little net of mucous, and suck up any bits of food that might land in it.

“Using contractions (peristalsis) to pump water through its burrow, the worm sucks plankton, bacteria, and other bits into this net,” Parr went on as his readers quietly gagged. “When, like any vacuum, the net gets clogged, the worm slurps it all back into its mouth, taking in the particles it wants to eat and discarding the rest into the tunnel.”

When a particularly large storm whips its way along the coastline and over the penis fish burrows, they can be rudely ripped from their little penis houses and unceremoniously deposited on Drakes Beach in Northern California, where they look like piles upon piles of penises.

Editor’s Note: a previous version of this article stated that Drakes Beach is located in Central California.