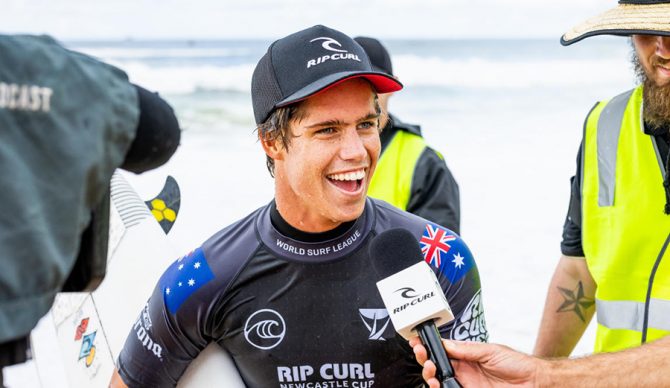 Morgan has little t lose, and a world to gain. So why not? Photo: WSL

If Rip Curl’s Postcards from Morgs acted as a goofy and light-hearted introduction to our rookie New South Welshman, then his first year on tour has been an audacious shout in everyone’s ear. Morgan Cibilic is a world-class surfer. And after finishing in the top five of the men’s rankings, the stage is set for gladiatorial level duels to splatter across our screens from far north San Diego County.

Do you like the format? It’s a mixed bag of opinions. Gabriel Medina hasn’t held his tongue, making it well known he doesn’t think it’s a fair way to crown a champion. Does he have a point, or is he staring down the barrel of missing out on world title number three because of a 21-year-old from Yamba who hasn’t got a single thing to lose — but the whole world to gain? This is why Morgan’s going to shock the world, because every living soul on the Australian continent right now thinks he can.

To understand Morgan Cibilic and why he is a legitimate contender, you must look at this young man’s demeanor. His personality will prove to be a vital piece of weaponry when taking on four of the world’s best and ultimately beating them all. He’s the epitome of humble and affable. If his perpetually beaming smile and borderline-shy post-heat interviews are anything to go by, Morgan is just a young fella who really likes to surf — and does it damn well. There’s minimal ego in the mix: he’s literally just happy to be here. Across any sport, this added weight on athletes’ shoulders — crazy high expectations — can make or break careers: a razor-sharp edge separating trepidation and self-assurance.

An unchecked ego can be a formidable additional opponent — luckily, not an issue here.

He grew up and surfing New South Wales’ North Coast, which meant being submerged in a core scene with chargers such as Laurie Towner and Dan Ross, who habitually gouge the eyes out of any large wall of water and do very little to publicize it. These are the types of protagonists and inspirations a world champion needs. Putting your head down and getting the work done without bravado is firmly on the script when it comes to being number one. Morgan, fortunately, gets that.

Some might say the kid doesn’t stand a chance against an unyielding Brazilian storm of undeniable talent. On his best days, Medina is on an entirely other level, Italo is so freakishly quick and perfect it’s not funny, and Toledo could just pip them all to the post and be the fly in the Champagne we all know he has the potential to be. Morgan has been defeated four times at four different events already by Medina this season; however, amongst that, he had an incredible run of results on the Australian leg. He’s surfed against and beaten some of the best: his experience and confidence have skyrocketed, further punctuated with an all-time performance at the Rip Curl Rottnest Search where an on-fire Medina was never going to be beaten — by anybody.

Cibilic has intimate experience of the two-time champion’s methodical nature and flawless talent — this will be crucial intel.

Wave pool entrepreneur Kelly Slater once famously said, “it’s all about where your mind’s at” — if Cibilic finds his mind in a good place as he skips across the famous cobblestones of Trestles, we should have our first Aussie men’s champion since 2013.

He is a complete package. Shades of Joel Parkinson’s signature fluidity and style converge with an oversized helping of Mark Occhilupo-esque power and tendency to decimate lips, often producing speed off the bottom where others would struggle to do so. We witnessed clutch surfing on his backhand at Narrabeen and then putting John John Florence— arguably the world’s best surfer — to the sword not once, but twice across the Australian leg. Each event, he has shown up and given everything he has. Broken toe included. Although we can expect an aerial aspect to the finals day (how much is anyone’s guess), Morgan won’t shy away from getting his fins out and going airborne should the opportunities present themselves.

Sometimes you have to fight fire with fire.

Shoulder high Lowers will favor his no-nonsense approach, weaned from endless hours honing his skills at the blue-collar entrenched locale of Merewether, and will be the perfect canvas for larger-than-life turns we know he’s capable of. And if the precedent is set early on by the judges to reward hard-hitting rail work and brutish turns with big scores, then he has more than a chance. It’s his for the taking.

If Morgan Cibilic brings that fight, he’ll be the first-ever men’s rookie to win a world title. Standing in the young man’s way are only five heats, four surfers, three world titles, and a legion of die-hard Brazilian surf fans.

All in a day’s work, right?