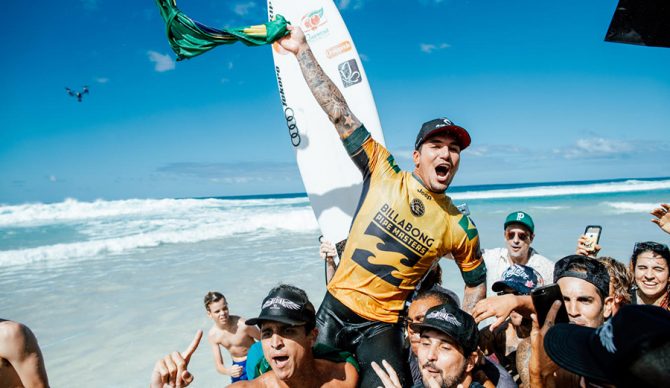 I keep a list of things people have said to me over the years that turned out to be profound wisdom or advice. I won’t bore you with the whole list, I’ll just dive into one simple nugget that’s relevant to this week’s WSL Finals. It came from a sports anchor in my former life as a broadcaster:

Poof. It all made sense. Drama is primal. It makes us feel. It erases our ability to reason, leaving us with feelings of despair, joy, or rage when that buzzer-beater clanks off the rim. To hell with understanding the rules or the nuance of the game. A story can make a person feel alive, whether the outcome they get is the one they wanted or the one that breaks their heart. This is why we are inclined to root for underdogs and Cinderellas. And once we’ve seen David slay Goliath enough, he eventually becomes the bad guy.

It’s part of why so many surf fans irrationally despise Gabriel Medina — he’s never the underdog. All the petty justifications about not liking his attitude or his demeanor are just ways to bargain with oneself, arguments to support a feeling that boils down to a primal urge. I know this because I’ve been on a 20-year crusade against Tom Brady and every new Super Bowl ring gives me a physical sensation in my gut. I know this because I remember the days when a lot of people couldn’t stand Kelly Slater, but once he stopped winning anything and everything at will surf fans thrust him back into the underdog pocket of their brain.

With that said, the WSL Finals are set up to accomplish exactly this: to give us stories. Stories we root for or stories we hate. It doesn’t matter how you feel the day a champion is crowned, all that matters is that you’re going to feel something when a world title is decided in the water. And depending on how the day plays out, here are five storylines that are either going to be repeated over and over during the broadcast (see points one and three) or stories that will naturally evolve from the event:

Gilmore became the first surfer to win a world title as a rookie back in 2007. She turned 19 that year and railed off four consecutive titles immediately after. In 2018, she matched Layne Beachley for the most women’s titles in a career with seven. Number eight would make her the official GOAT.

It will be a helluva battle for Gilmore to accomplish that on Finals Day because it would require her going wire to wire, matching up against World #5 Johanne Defay in the first heat of the day, and needing to best Sally Fitzgibbons, Tatiana Weston-Webb next. The only heat Gilmore could afford to lose wouldn’t come until facing off against the current top-ranked Carissa Moore in a best of three matchup.

That would be a legendary performance. Can you imagine how fun it would be to watch? So long as Steph Gilmore is still competing on Finals Day, expect this storyline to be repeated over and over and over…

2. Gabriel Medina’s Finals Day Either Ends in Redemption or Rounds Out What’d Have to Be the Most Frustrating Year Ever.

Gabriel Medina is not stoked on the new format.

“I don’t like it because I don’t think it’s fair,” he told The New York Times this week. “You spend your life, a year long, and now the last event in September, you’re gonna decide all your year? I don’t know about business, I don’t know how it works. They tried to do something different.”

As somebody who considers himself a very big fan and supporter of Gabriel Medina, I have this to say: Dude. Suck it up.

Of course Gabriel Medina thinks it’s unfair to decide a world title on a single day in September. Do you know why? Because Gabriel Medina would have had this title wrapped up last month under the WSL’s old format. He has an 11,000-point lead over number two Italo Ferreira, enough to put him out of reach with another contest left. So yeah, let’s take his discontent with a grain of salt because it’s an awfully convenient take on a change that may steal a world title from him. And that would only pile on to the frustration of believing he got robbed in the Olympic semifinals against Kanoa Igarashi in July.

Now, here’s a bit of very, very simple perspective: ALMOST EVERY SPORT DECIDES A CHAMPION LIKE THIS! The WSL didn’t just reinvent the wheel and insert some hair-brained radical shift. The 2007 Patriots went 16-0 and then lost the Super Bowl. The top-ranked college basketball team in the country still has to win a 64-team tournament every year in order to become champion. A USC Trojans football dynasty went two calendar years without a loss and finished second in the nation to the Texas Longhorns. There’s a thing called “the playoffs” and they’re a helluva lot better than professional surfing’s old format for deciding a champion.

Sorry, Gabby. You’ll be pumped about it all someday when you come into a Finals Day ranked number two, I promise.

3. A Conner Coffin Win Would Be the First Californian World Title Since TC.

Tom Curren was the last Californian to win a world title. That happened in 1990. Conner Coffin was born in 1993.

There are a lot more fans who won’t care about this fact than those who will. Surfing is a global sport, not a Biggie/Tupac rap battle. Still, like watching Steph Gilmore throughout the day, every potential heat win for Conner Coffin will come with approximately eight and a half reminders on the broadcast. And also like Steph, Conner pulling this off would start to get exciting the closer it gets. He too will need to go wire to wire and you have to admit, Conner Coffin and an overhead day at Lowers sounds very, very dangerous and very, very fun to watch.

4. The WSL wins no matter what.

As mentioned (see point two), a world title would have been wrapped up at this point under the WSL’s old format. A repeat scenario like Italo versus Gabby at the 2019 Pipe Masters would be mathematically impossible with another contest left on the schedule.

That’s boring. Professional surfing has seen too many seasons end with a proverbial victory lap by its champion. What we have instead is a Finals Day that matters and even the most casual sports fan gets hooked when there’s something big on the line. The point is, we still have a reason to watch until the bitter end. That is no mistake. It was absolutely by the WSL’s design. So no matter who wins in the water, the League earns a W in a year of dodging every wrench the pandemic could throw its way.

5. Carissa Moore is the most dominant surfer on the planet…if she wins.

It’s hard to imagine anybody beating Carissa Moore right now. She has a shot at back-to-back world titles (courtesy of a canceled 2020 season) that would only add to the gold medal she just won in July. Her spot in this Finals Day lineup has been secured since June, and that was before the WSL took Teahupo’o off the board.

So, remember that comment about how our perception of champs flips when they transition from David to Goliath? Carissa’s an exception. She’s arguably the most likable person in the entire sport and her dominance over the field is palpable at times. A win on Finals Day and a fifth world title for Moore only builds on the greatness she keeps displaying.