Dear Foilers: Have Fun, But Please Stay Well Away from Me 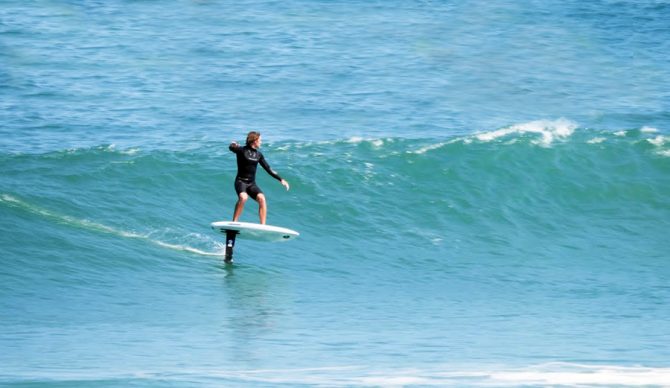 You guys are good on your foils. But please, stay clear of me. Thanks. Photo: Screenshot//Damien LeRoy

For most sports, you want to be as close as possible to the action. We’re talking front row, blood dripping down the glass kind of close. But when it comes to foiling, I want to stay far, far away.

Don’t get me wrong, foiling is awesome and it’s amazing to watch. But it’s also incredibly dangerous. Getting hit by a surfboard is bad enough but get hit by the blade of a hydrofoil and you just earned yourself a ticket straight to the emergency room.

I remember when SUP surfing first became popular and everyone was hating on standup paddlers. The argument was that paddlers had the upper hand and could unfairly catch waves before prone surfers and that their boards were dangerous due to their size. I found myself smack dab in the middle of that debate.

On the one hand, the arguments against standup paddlers were on point. They could catch waves earlier and their boards were bigger and potentially more dangerous. But I also thought there was a place for paddlers in the lineup. If they were a skilled paddler and shared waves, I had no issue with them being there. If they were a beginner, I still supported them trying the sport but preferred that they stuck to the outside of the lineup or to waves sanctioned for standup paddlers. I feel the same way about foiling.

I live on the south shore of Oahu, Hawaii and foiling has become incredibly popular in recent years. On any given day, you’ll see multiple foilers flying through the lineup. Although many of them are incredibly talented and are confident in their skillset, I am not. When a foiler comes within a few feet of me and sprays me on a turn, my heart starts racing—I have no idea whether they’re experienced or if it’s their first time foiling.

And even if they have foiled every single day for the past ten years, they could still fall and send their board and their hydrofoil flying straight at my face. I’ve seen people trip and fall walking down the street, so it’s definitely within the realm of possibility and the consequences are substantial.

Recently, I was surfing at a local spot just outside of Waikiki. The lineup wasn’t too crowded, but crowded enough, and a foiler came down the line towards me and lost control of his board, launching it directly at me. Luckily, I’ve been hit by surfboards enough times to react quickly. I jumped off my board, covered my head with my arms, and braced for impact.

By some miracle, his board and foil missed me and I walked away from the situation unscathed. While other people in the lineup checked in with me and were concerned about my safety, the foiler didn’t apologize nor did he ask if I was okay. It left me with a bad taste in my mouth and a fear of foilers.

Personally, I think it comes down to respect. I don’t want to make anyone feel uncomfortable in the water or risk the safety of others, regardless of what craft I’m riding. Two more seconds on a wave isn’t worth risking injuring someone in the lineup. If you’re riding something more dangerous, like a foil, it’s even more important to take others into consideration and make sure you allow plenty of space for the safety of everyone in the water. Creating foil specific surf spots is something to consider but I don’t think it’s necessary if we can learn to respect each other and share the ocean.

If you foil, I’m not saying you should stop. In fact, I think you should keep at it. But I also think you should stick to the open ocean, outer reefs, or the outskirts of the lineup. So foilers, get out there, get after it, and have fun, but do me a favor and please stay away from me.