Opinion: ‘Big Oil Don’t Surf,’ But It Sure Does Make Good Surf Movies 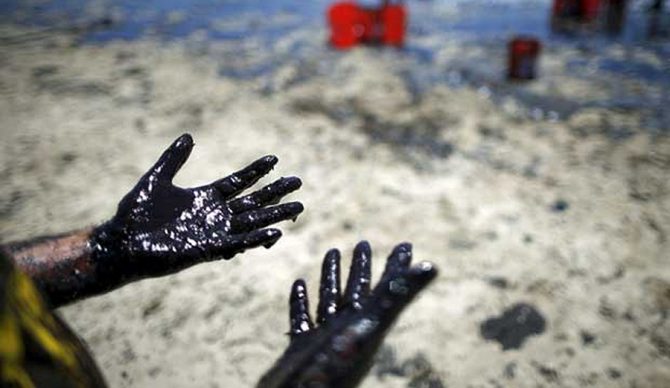 We watched a film powered by oil, produced with cameras and technology made by oil, to be part of a night made possible by petroleum. As Patagonia states, “Big Oil Don’t Surf,” but it does make surf movies.

The power of film to inspire change is an incredible thing, especially when a film successfully balances a powerful message with something as soul-satisfying as surfing. When I sat at the premiere of Patagonia’s new environmental-surf film Never Town, I realized film’s equally powerful ability to avoid change altogether.

The Santa Barbara premiere of Patagonia’s Never Town beckoned wholehearted support, as environmental organizations, surfers, and nature-lovers united to hear the story of an issue charged with social dynamite. Following a group of famed surfers on their quest against deepwater drilling in the Great Australian Bight, the film is an important story of global coastlines transformed into oil digging grounds. Yet like most stories, it is one interpretation of a complex and dynamic reality – and in this story, the most telling dimensions lie in what is left out.

The film projects a valid focus, attacking the absurd proposal to deepwater drill. Disaster is so unavoidable that the company responsible is already celebrating inevitable complications as “job opportunities” for local communities. It really is a thoughtless decision, and the film shows it. But this is where you would expect most environmental films to stop, and beneath the tale of do-gooder environmentalists vs. blameworthy industry, a deeper story begs to be told.

The reality is this: we live in a world powered by oil. We may not love thy enemy, but we certainly do love everything thy enemy provides, and passionate outcries to dropkick oil off the face of the Earth haven’t offered many alternatives. Many of the people in that room – myself included – drove to the premiere. The very notion of surfing and exploring isolated havens of the Earth requires an almost definite reliance on fossil fuels. We watched a film powered by oil, produced with cameras and technology made by oil, to be part of a night made possible by petroleum. As Patagonia states, “Big Oil Don’t Surf,” but it does make surf movies.

The film’s pleasantly framed story of good vs. evil, the plight of the surf-environmentalists against an insidious industrial beast, misses this. Corporate malfeasance is not the central problem, it is one dismal component in a convoluted web of other things gone awry. I wasnt us to ask deeper questions, like why are we drilling to begin with? What systemic forces make certain Australian communities vulnerable to subjugation and neglect by polluting industry? This is not breaking news, it is a pattern, and we need to examine the forces that have paved the way for this global phenomenon of industrial conquest.

We also need to ask if our goals are reasonable because the fundamental concept of preserving “untouched” swaths of nature defies society in its present state. When our lifestyles depend on the pillaging of the environment in unignorable ways, how do we deem a place “deserving” of preservation? If Big Oil doesn’t drill the bight, where will it go, and how could it target communities with fewer resources for resistance? We need to acknowledge that defense of our favorite surf spots is a very privileged view of conservation, as the world’s poor and disenfranchised involuntarily sacrifice their health and wellbeing to feed our consumptive lifestyles every day.

The irony is that the film is supposed to expand our minds, and instead, it limits our thinking. This is about more than watching great surfers frolic across wild landscapes and preach world peace from atop picturesque cliffs. It’s about making a very dramatic, intimidating, and culturally shocking change to our current way of life. It’s about adopting lifestyles that don’t rely on the pillaging of the Earth and people’s homes. Surely, we’d all rather watch Dave Rastovich soul dance across mysto peaks in the South Pacific than sit before a screen that demands these difficult questions. The film captures the allure of beautiful surfing but delivering an environmentally focused message would go even further. And I bet Patagonia could pull it off. At that premiere, it felt like we were celebrating ourselves rather than brainstorming real solutions. Films that examine tough problems at the core are sometimes scary buy we need critical storytelling to free us all.