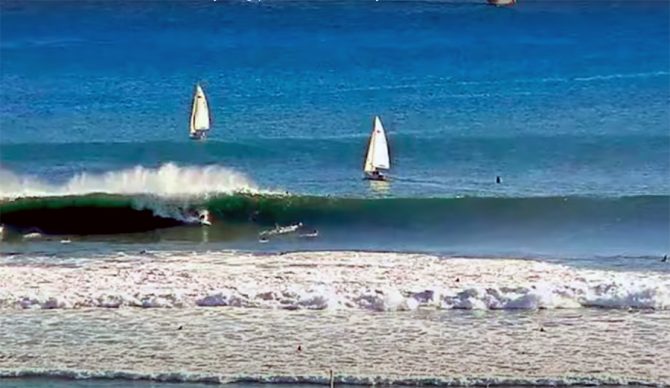 Why do we surf? Is it to escape reality and enjoy a connection with nature? Is it to challenge your personal limits, try new tricks, and progress as a surfer? Is it to “get away from it all?” With surf cams, and especially with the rewind function, all but one of those options are ruled out, leaving room for only hyper fixation on performance and an unnecessary obsession with personal appearance.

In California, at least, surfing and filming are so heavily intertwined (Bruce Brown recorded The Endless Summer over three decades ago!) that one almost expects to spot at least one or two people pointing handycams in their general direction from the water. And this is fun, most of the time.

Walking down to the water through little groups of people basking in the sun, holding up vintage camcorders and squinting to find their surfer in the lineup is not only endearing, but nostalgic for a time where the only way to capture a moment was to grab your friend and give them a camera. Or, if you’re good enough, to be recorded for a surf film.

Being from Maine, I’ve not only accepted but even come to appreciate filming as another part of California surf culture. What I have not accepted, however, is the obsession with cam rewinds. In my experience, cams drain surfing from everything that makes it enjoyable.

Back home, surfing was truly an escape. There was a cam for the local spot, run by some real estate guy, and sometimes you could see the waves on it, but sometimes you couldn’t. What you could do is take your best guess and drive over to check it out. When it was snowing and the driving was miserable, you’d call a friend who lived closer or already surfed that day and ask them how it was.

In California, however, virtually every known spot has a cam, and some spots even have cam rewinds. What this means is that the gamble in adventuring somewhere to surf is completely lost. And that probably sounds great. But the reality is that the gamble is what makes surfing, and especially surfing on the good days, so fun.

The science behind why surfing is so addictive tells us that dopamine is released when anticipating a good swell. But if every day had the same swell conditions, we wouldn’t care anymore. A good day would become meaningless, a day like any other.

Dr. Nora Volkow, the Director of the National Institute of Drug Abuse, reports that “an unexpected reward has much more power than one that is regular in driving behavior.” It’s hard to find unexpected rewards when you can log on and see exactly what you’re going to get.

Personally, I also find the time during sessions negatively affected by the presence of the cam. I paddle out with very different intentions than when I had previously paddled out unrecorded. I’m not a competitive surfer by any stretch of the imagination, but recently, I’ve become hyper fixated on my performance.

Every ride has turned into a strict competition against myself: were my arms too high? Was I even in the pocket? How did I look? Why couldn’t that person who dropped in front of me get off the wave faster? I knew every mistake I made was being immortalized by the all-seeing surveillance somewhere from shore. I became agitated at myself and everyone around me. 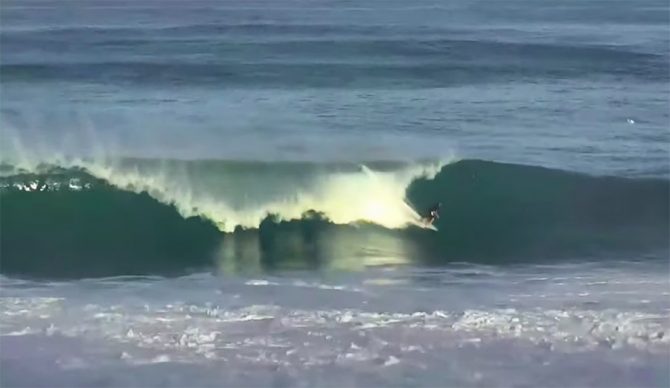 When I got out of the water, instead of enjoying the calm that usually accompanied a session, I hopped straight on my phone to screen record my best rides.

Don’t get me wrong: I’m not here to preach some holier-than-thou sentiment that none of us should care how we look surfing. In fact, surfing would be incredibly boring if no one cared about style. And, having an ego can be positive. With ego comes passion, individuality, and meaning in life. But too much ego can obviously be harmful, and with cam rewinds, one’s ego becomes their center of attention.

In the Art of Meditation, Alan Watts explains how often, “a great occasion is spoiled for us unless photographed. And to read about it the next day in the newspaper is oddly more fun for us than the original event.” Sound familiar?

So, maybe it’s time to rewind — not the cam, but our intentions in the water. Reality requires a connection to the present, and no cam will ever be able to capture the pure joy that being in the water affords us. So let’s slow down, enjoy the moments we have while we have them, take a deep breath, and learn to live in the present.

You may even find you surf better because of it. And if you just have to know the time after getting off your best wave to mark it for later, for the love of whatever, get a watch.