Why I’ve (Mostly) Had It With Fiberglass Surfboards 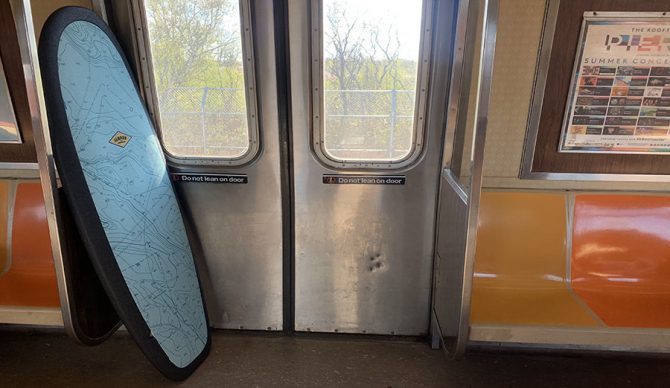 Riding the subway to surf will change your mind about material really quick. Photo: OJB

Look, it’s not that I don’t appreciate the featherweight dexterity of a deftly shaped thruster, mid-length, or log, it’s just that, plainly and simply, I don’t have the time to care for them. I’ve turned my attention to foam.

Half of my time spent surfing near home these days is on public transportation. If I weren’t clumsy enough as it is, I am slipping through subway turnstiles and hastily-shutting automatic doors. I’m ambling up bus platforms and making awkward turns through indifferent if not outright obstinate crowds.

Rails end up clipping posts, handles, and stair rails. Every so often, the entire board bag will escape my shoulder or grip, and the whole thing drops to the floor where, in a city of eight million, it’s liable to land on anything or anyone, none of which (or whom) are all too forgiving.

I too – despite my middling average-Joedom upon them – was once a purist of fiberglass, fin, and foam. But times have changed and I’ve learned a thing or two about myself.

I did, after all, trade in pitch-perfect surf, day in, day out, aboard a sloop among the Fijian Isles for a 9-5 desk-bound job in Gotham (even the illustriously groomed, sapphire-gin breaks of Tavarua and Namotu can lose their luster in time).

And so life changes. Partners and home ownership can take precedence over pre-duty dawn patrols. And depending on who you are and what your priorities may be, that’s quite alright — it is for me. For now.

Not to suggest that I don’t still slip out on the right day. Those just come fewer and farther between.

Apart from the odd day of knee-high beachbreak chop, I hadn’t really considered a foam board in any serious capacity.

Then, one day during a bout of prodigious hurricane swell, I witnessed a friend 20 years my senior make the kind of steep drop into a heaving, nearly double-overhead section atop an eight-foot Wavestorm that enthralled. The kind of straight drop to bottom turn I’m not sure I’d overcome even on the very gear of my choice.

It felt like a challenge, of course, but more so a revelation. He kept this board atop his car. Drove around the city of Charleston and parked downtown for coffee-shop meetings and left it to its own devices, careless as you like. This appealed to me.

There was no melted wax atop his roof or baked into his upholstery when he felt so inclined to leave his board within his car on a triple-digit summer’s day.

And so I got me a Wavestorm. After all, this was Charleston, South Carolina in the summertime, where southeasterly-strewn ankle-biters are standard fare and you make with it what you can or go find something else to do. 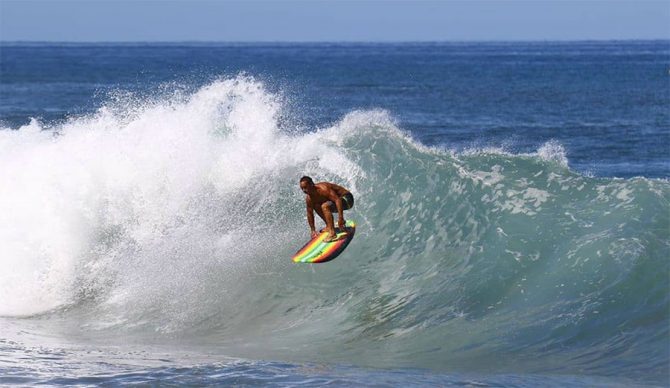 You can make drops on foam. You can. Really. Photo: Carrie Michelle Mandel

I didn’t care. I was reveling in sedentary life with the comforts of a studio apartment and a place to tie my skiff. Life was slowing down and so too were my wave-gliding aspirations.

Fast-forward a few years and I’ve found myself living in New York City, as sedentary and domestic as sedentary and domestic can be. Apart from the aforementioned, there’s now a house, a partner, and a grom-to-be on the way. I don’t exactly have the time or expendable income I once did to address ding repairs. I live in an apartment, after all, and I can’t exactly break out the resin and get to work in the living room.

Still yet, just about everything I own is at the mercy of a construction zone which is, in a word, merciless.

As I’ve settled into this new life indoors, I’ve discovered the merits (and rabbit holes) of Instagram and YouTube, where I happened across the likes of the champions of soft-top surfing, the lovable, happy-go-lucky energies of Ben Gravy, and Jamie O’Brien, who seem to have every bit as much, if not more fun as the rest of us.

I zeroed in on something short and squat, something that wouldn’t discourage me from taking on New York City’s serpentine underground labyrinth. Something that, should it encounter an unfortunate demise, I would not be heartbroken.

In fact, I don’t even need a board bag for the stubby little mass of HDPE foam I have lovingly dubbed my “Metro Card.” And despite its humble genealogy and resilience to, well, me, it sports two balsa stringers, a set of Future Fins, and turns every bit as well as anything else under my feet for about half the price of the works of art I tend to ogle over but never buy. I do toss it into a cheap board bag when I take it on flights, but even in the brutish mitts of baggage handlers, I have not a care in the world.

Someday, maybe when life slows down a little bit more, I’ll commission or perhaps even build my own wooden hull. Till then, I’m perfectly fine with my modest quiver of foamies, thank you very much. Although, between you and me, I’ll probably keep a glass board or two on hand — just in case.