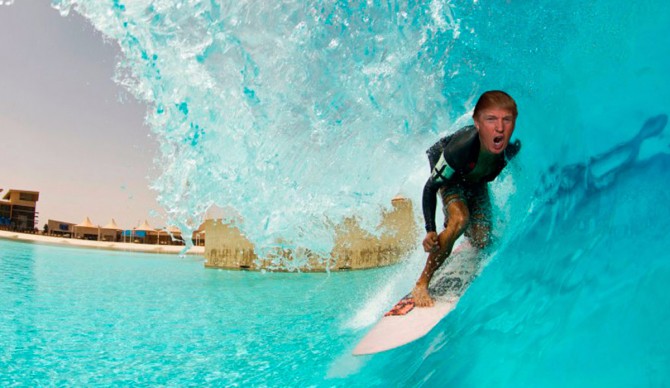 Donald Trump’s election was nearly unthinkable. Now, it’s reality. So where to?

What do we do now?

We just woke up in a different world. We watched a map of America bleed a deep red with a few shocks of royal blue, and it became apparent in no uncertain terms that America is a nation torn by radically different ideologies and narratives. The Pacific palm trees of Southern California are a long distance from the hickory of Alabama in more ways than one. It also became apparent that simplification is an infinitely more effective communicator than nuance, and politics is reality TV of the highest order. No wonder we have a gameshow star in our executive chair. Bombast is the currency of the day, and angry words are powerful instruments that fuel action: Crooked Hillary. Bad Hombres. Nasty, nasty woman. Grab her by the pussy. Rigged system. Birthers. Build a wall. Stop and Frisk. Chinese hoax. Make America great again.

Trump wrangled a litany of simple, scathing words to galvanize a disenfranchised populous seeking disruptive leadership. Emotionally charged, angry rhetoric from white American victims hoping a broken system will restore the things we’re supposedly entitled to. That’s the work of a media-savvy celebrity, who triumphed – despite his distance socioeconomically and culturally from his core supporters. Anger is a powerful currency – ask any media outlet. To feel is infinitely more powerful than to feel numb. No character in today’s presidential election inspired people to feel angry more than Donald Trump. That’s not a good thing. But it’s true.

That is America on November 8, 2016. Eminem called it in 2002: “White Americaaaa!” NOFX called it in 1994. “Don’t call me white!” And somehow, in a moment where innocent African Americans are shot and killed by police without recourse and a president elect vows to ban Muslims from entering the United States and deport Mexican citizens during his campaign, white people are the neglected demographic seeking redress in a phenomenon that The New Yorker called “resentment at the browning” of America.

It’s easy to be angry. I’m upset. The idea that a man who has consistently used crude, bigoted language targeting minorities and wide swathes of the voting population (Latinos, women, Muslims, Jews…), refused to distance himself from an ex-KKK leader, and relentlessly questioned the birthplace of our two-term president has been elected to the world’s highest office is disturbing. Those tweets and incendiary calls to arms are nails on our civil chalkboard. They’re disgusting. As such, so is America’s decision.

So what do we do now?

I’m an optimist. I’m confident we will learn from today’s election and channel that anger into revolutionary and productive action. We have no choice. While there may be dismal short term consequences on account of such a drastic change in leadership, we have an opportunity to relish the fire lit under our ass and accept it as inspiration to create the world we desire. Now, intelligent, progressive thinkers in America no longer have the luxury of sitting idle. That’s not an option. And while I admit that Trump’s victory speech tonight revealed a humility we hadn’t seen before and a seemingly genuine desire to unite a diverse group of people that he irreparably fractured, the onus returns to the people to take responsibility for making change. If anything, Trump is living proof of that.

The New York Times election prediction graph and its changes over five hours. Take nothing for granted. Ever.

We have to create the world we want to live in. We’re not entitled to anything. Consider that the world’s best journalists at the New York Times predicted the election winner with 85% certainty (Clinton) an outcome that become less than 5% likely just a few hours later. Nothing is given, and liberals forgot that the same way disenchanted conservatives remembered it.

As such, progressives failed to tap into the same dormant emotions that drive America to be its greatest. I regret that The Inertia failed to make a formal presidential endorsement this election. It doesn’t matter that it most likely wouldn’t have any impact. But it could have. In my estimation, it was the right thing to do, because it was an expression of how I, as a leader, and The Inertia staff, as a collective, feel with a renewed obligation in communicating to our 1.5 million monthly readers. I regret that we didn’t take Kelly Slater, a man I deeply respect as surfing’s most influential ambassador, to task for choosing not to vote in this year’s election despite hosting an art show to inspire political conversation. In my estimation, that’s a disingenuous thing for a thoughtful person to do. Voting is a privilege our forefathers died to preserve, and while I respect anyone’s right to refuse to participate, for those who care about the environment (surfers and outdoor enthusiasts) and social justice (thoughtful people), there was an appropriate choice on this year’s ballot. It was not Donald Trump.

I hope I’m proven wrong over the next four years, but I’m not proud to live in a country led by a man that when asked how Muslims can expect to feel safe in America during a presidential debate responded: “Muslims need to report problems when they see them.” That scares the shit out of me. That sounds like language that became commonplace a short time before six million of my Jewish ancestors were systemically killed.

And while fear can be a great motivator, anger might be a greater one. As such, these political pendulum swings are part and parcel of democracy. That is democracy. The right corrects the left. The left corrects the right, and so on as progress endlessly zig-zags into the future. Every four years our government, like Nintendo, offers us an opportunity to press the reset button. Well, it just got pushed. It will be interesting to see where and how we resume, but more importantly, this election is a great reminder that our fate is always in our own hands. There is no room for regret, laziness, or complacency in America. We could all learn a lesson from Mr. Trump in that regard: Dream big, and if you want something, no matter the odds, go get it. He just did. And in searching for an ironic silver lining, that matches the American dream pretty well.