Editor’s Note: This #RADGEAR was done with the help of our awesome friends at Carbon Compact, creators of this brand new travel surfboard technology. 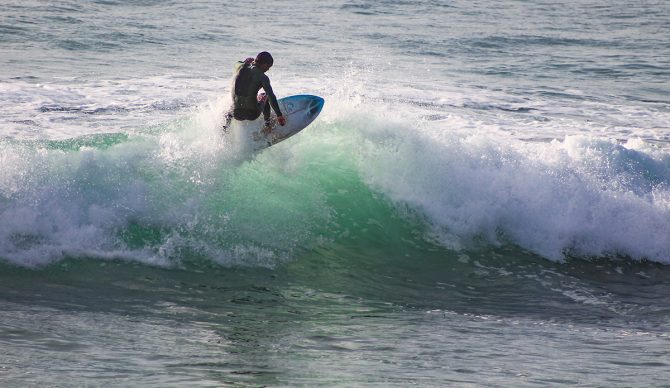 Would you guess this board gets pieced together like a set of Legos? Surfs better than Legos though… Photo: Alex Walsh / Carbon Compact

East Coast board builder Mike Becker has heard his fair share of oversized baggage fee horror stories. You know the ones. When bringing a board on a surf trip somehow ended up costing more than the airfare itself. Or when the airline lets you bring three boards on one flight, then decides to charge you something extra for the third on your return trip home. Stuff like this gets under every surfer’s skin. We just want to know what to expect, rather than getting hit was exorbitant rates at check in. And paying something reasonable to begin with wouldn’t be half bad either. In fact, these might be the only things all surfers actually agree on. So in 2009, Becker set out to alleviate this universal pain.

“I’d always heard about the Pope Bisect (the well-known two-piece collapsible travel board) and had customers that said ‘I wish I had a board I could travel around with. A good quality travel board, even a shortboard that can fit in a backpack.’ It’s something people asked me for and I felt the industry needed it.”

Doing his research, Becker found the critiques and reviews of existing travel board systems to create his own over the next six years. He experimented with carbon fiber tubes. He took old boards and cut them in half, just so he could put them back together again. He tested out PVC piping, torched it, bent it and did just about anything a shaper could imagine to come up with what he felt would be the perfect formula for a two-piece board that would perform as well as a surfer’s everyday go-to. When he finally came up with that formula he called it the Cardon Compact, a stringerless board that can fit in a large backpack sized bag. 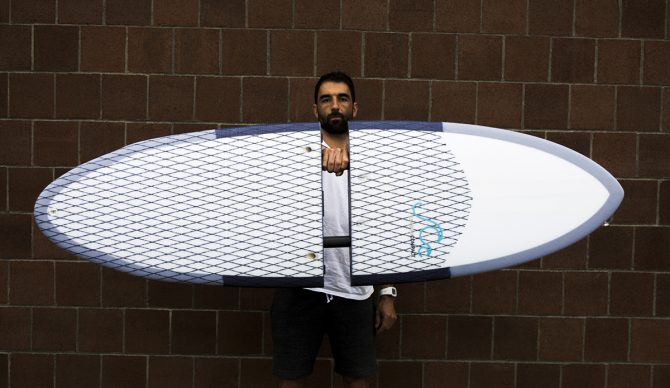 As somebody who has always been as creative as possible in avoiding baggage fees on surf trips, stuff like this is right up my alley. So I didn’t complain when Becker sent one of his carbon compact models to test through the holiday travel season. Los Angeles to both Oahu and San Francisco in a three-week span with little time for waves at home, and the opportunity to slip a functioning surfboard past the check in desk without paying a dime for any of it. Sign me up.

Stop #1 was a few days on the North Shore with the sometimes infamous Hawaiian Airlines. Now, Hawaiian is one of those airlines that charges for any checked bags. The most common oversize restrictions that just kill us all when it comes to surfboards are fitting in the length and weight requirements. Too many boards and you’ll exceed the 50-ish pound normal cutoff. And just about any surfboard is going to be longer than your golf bag.  So the trick here was simply making sure I’d only pay the standard $25 checked bag fee for my boogie board sized backpack, rather than the $100 oversized fee. Part of me was nervous I’d get charged an oversized fee on the principle that I was still carrying a surfboard, whether the thing was basically broken into two pieces or not. It only weighed in at 25 pounds with all my trunks, two towels, a couple sweatshirts, two sets of fins and all the tools for my board. So I knew they couldn’t gripe about the weight of my board.  Sure enough, the check in clerk at LAX asked me exactly what the odd shaped bag was and I nervously admitted it was a surfboard, held my breath for a second, and was relieved when she grabbed it and threw it on the carrier belt without another thought. Crisis averted and nerves were calmed ahead of my next three flights. I paid Hawaiian’s $25 standard fee each way and no fees on my flights between Los Angeles and San Francisco – my lifelong streak of avoiding oversized fees still intact.

Of course, the test that would prove whether or not investing in a travel board would be worth it was in the actual surfing. Could a two-piece, stringerless board perform like any other quality surfboard? I also didn’t want something so difficult to put together I’d need an instruction manual. It actually ended up being really easy to put together. If you can screw FCS or Futures fins into a fin box, then you can piece together one of these. The carbon fiber rods slide in and out of the board while four separate bolts screw into the deck and bottom of the board at an angle, exactly as you’d screw in your fins. Voila. I put the whole thing together when I dropped my bags at the house and went for my first surf at fun, chest high Backyards. I never took it apart again until it was time to pack up for my return flight home at the end of the week. Two weeks later, while visiting Mom and Dad for Christmas, I brought the board with me once more and enjoyed the exact same luxuries in the “slightly” cooler waters of Northern California. 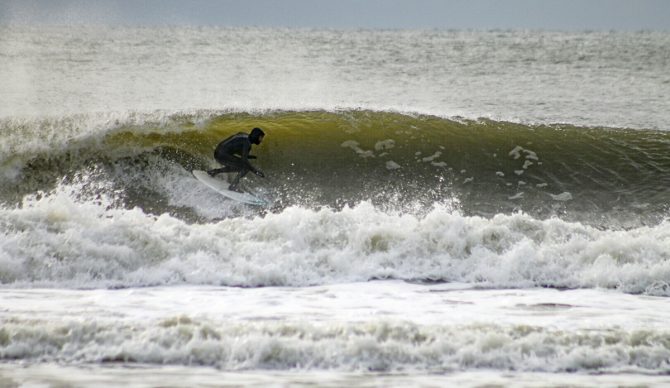 As for the shape itself, I’d have preferred a more universal/all around shape than the 5-4 Biscuit type model I was testing. I would have loved to have a more suitable shape that could handle some heavier surf, instead opting for a friend’s board anytime the waves moved into the head high range on Oahu. But that was really only a circumstance of the Carbon Compact model that was made available to me, rather than the technology itself. Otherwise, I found the Carbon Compact collapsible system functioned just like Becker had told me. Similar flex and buoyancy as any other surfboard, only about two pounds heavier than the same board would be without Becker’s carbon rods. And no, the board doesn’t feel like it’s going to snap under your feet right where each section fits together.

So if and when the time comes for a dedicated travel board, I’d suggest any surfer think long and hard about the most versatile shape they can order. You might even find yourself using something like this as a daily board, as I’ve been able to keep mine in the back of my Jeep without needing to put any of the back seats down. Surfboards suddenly become convenient to lug around when they can fit in a standard trunk, so the surfer without an SUV or truck has use for these as much as the constant traveler.

When Mike Becker started this Carbon Compact endeavor in 2009 he’d envisioned a technology that would follow the “model” formula for boards, creating a handful of sizes, shapes, and models that could be available to a large customer base. But when he launched the Carbon Compact and put it on the market in early 2016, he says the custom orders started coming in quickly. His “hardcore group of customers,” as he puts it, were asking for their standard 6-0’s and even mini simmons in a Carbon Compact. He obliged and says he made about 75 custom shapes in 2016. In the meantime, Carbon Compact is in the works to partner with a manufacturer who can distribute boards and potentially offer the best of both worlds.

Right now, the board builder’s website offers a handful of existing outlines for shortboards, longboards and SUPs, with shortboards starting at $1,150. The custom order form starts at that same price point, which makes sense once Becker breaks down the final price tag for a new travel board and the travel bag/backpack that comes with it. In my own two trips I saved a total of $300 between two different airlines, so the difference between that and another new shape from my local shop would have nearly paid for itself already anyway. “When I look at our base price for a good epoxy board we’re probably in the six hundred dollar range to begin with,” he says. “But our labor and materials to build a Carbon Compact is pretty much double per unit.” And exactly what makes the labor and materials cost double that of a standard, boring, surfboard that doesn’t break into two pieces and fit in your trunk? Well, that’s part of Becker’s magic. He’s not giving away the Carbon Compact secret after years of developing the technology and getting a patent for it. There are certain specs, like having a minimum thickness for the rails, that are essential to the Carbon Compact system. “You’d start to notice the flex because of the size of the rods that are there. If John John wanted a two-inch thick board I’d have to get special rods. We could do it, but the way it’s set up now, we want to fill the industry for anybody who calls up and wants one.”

And speaking of phone calls, Becker says he’s taken a few calls from other shapers after deconstructing one of his boards in hopes they could reverse engineer it. “The board building process is part of the technology,” he says. “Learning all those little tricks along the way was the hardest part. The trial and error. Try this. It doesn’t work. Break it in half. Throw it out. I did so many different experiments with the carbon fiber rods and getting that perfect formula was the magic.”

So is Mike Becker a board shaper, a mad scientist, or a wizard? Or is he just a guy that’s about to save a bunch of people some serious travel dough? 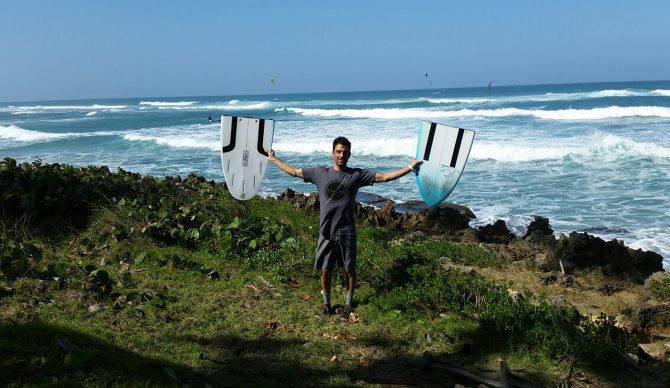