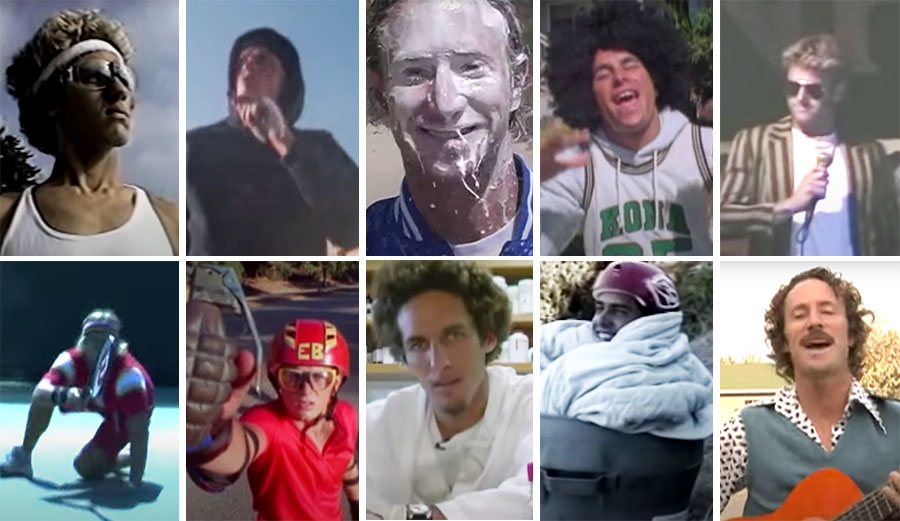 From Kelly Slater rolling down a hill in a trash can to Rob Machado’s jump shot, Taylor Steele’s skits were all sorts of epic. Images: Screenshots

Remember when Taylor Steele decided that surfing parts should have skits in front of them? Oh, it was a wonderful idea. Get surfers to act, which, for better or worse, is always entertaining. No matter how big the star, surfers are just regular people who surf very well. And since pro surfing was a very different beast back then, a whole bunch of things that would never happen today were caught on film.

“Surfing is fun,” wrote Steele. “No one should get up on a high horse because they ride a wave well. And that was the point of the skits. They were a way of humanizing the surfers. Just other guys in the lineup. It wasn’t easy… it wasn’t perfect… but looking back over decades of surf sessions, it’s often what we remember best.”

Speaking of looking back, ain’t YouTube grand? Thanks to Steele’s YouTube channel, The Momentum Files, we have the benefit of watching and re-watching many of those skits. “In what other sport would the current world champ put himself inside a trash can and allow himself to be rolled down the hill by his friends,” asks Steele. “Surfing is fun. These movies were all in the spirit of fun. Fun…and competition. Who had the best section? Who had the best maneuvers? And, yes, who had the best skit?”

So here, in all their glory are the 10 best skits, as rated by a nobody.

Editor’s Note: Taylor Steele is currently re-releasing many of his classics in partnership with the World Surf League.

Timmy’s skit from his section in Campaign is glorious. Edible sunscreen? We’ll take it, even though it would never really catch on.

Rob Machado has some good hair, doesn’t he? Long, curly, lustrous hair. That’s why he “spent years perfecting his cure for baldness.” And thankfully, there’s an advertisement for it. Now if only there was a way to actually get that hair. Kelly might want it.

Nowadays, it’s difficult to remember Dan Malloy in his “Extreme Boy” phase. But it was there, and yes, he did his own stunts, which included juggling grenades. If you’re looking for a seriously obscure Halloween costume for next year, look no further.

Remember when you were young and dumb? You actually might be young and dumb right now, but you think you’re very mature and absolutely hilarious. We’ve all been there. We’ve all done dumb things in the interests of youth and comedy. Take Kelly Slater, for example, at the beginning of his part in Taylor Steele’s Focus.

By the time Focus was unleashed on the world, the so-called “Momentum Generation” had made its mark on surfing. Not to the extent that they would later, but their mark was there, and they were in the process of ensuring it was permanent.

Is there anything more painfully awkward than watching someone on stage who has been forced into karaoke? Painfully hilarious, as well. Such seems to be the case with Taylor Knox, who, in those aviators, might actually be too sexy. Taylor Knox’s karaoke rendition of Right Said Fred’s “I’m Too Sexy” may well be the most awkward thing you’ve ever laid eyes on, but luckily, it’s short-lived and transitions into Knox’s incredibly un-awkward surfing.

7. Shane Dorian in The Show:

Shane Dorian is a bonafide living legend. For years, he’s been on the forefront of surfing, from being a part of the Momentum Generation to turning into arguably the best big wave surfer in the world. You’d be hard-pressed to find a surfer who doesn’t list him as an influence. “People often see unrideable, too shallow, too crazy waves and comment, ‘Dorian would love that spot,’” writes Taylor Steele in the latest installment of Momentum Files. Here’s Shane’s part in The Show, a film made all the way back in 1997.

8. Timmy Curran in Stranger Than Fiction:

This one’s a little different, but we figured it had to make the list just because it actually took some talent to create. The video is for a song called “Blue Eyes,” and it was written for the girl in the video… who happens to be Timmy’s wife. Right around the time Stranger Than Fiction came out, Curran decided he’d launch his foray into music. “Having been surrounded by filmmakers for his entire surfing career,” Steele said, “it made sense that he’d have a few hands up to make his music videos. Starting with this one.”

Did you know that Benji Weatherley’s dad played center for the Raiders, Falcons, and Redskins? True story! That means that Benji was born with some serious athletic genes running through his blood. Here’s another true story: Benji lived with Tom DeLonge of Blink-182 fame for three years in Pacific Beach. There was no partying whatsoever, and Benji trained almost constantly, as you can see in the skit above that was totally representative of his real-life at the time.

We’re not exactly sure if this counts as a skit, but Rob’s got a serious jump shot going on. And how’s that uniform? Shot way back in 1994, it’s a throwback about a throwback.