10 Perfect 10s: A Few of the Best Waves Ever Ridden in Competitive Surfing 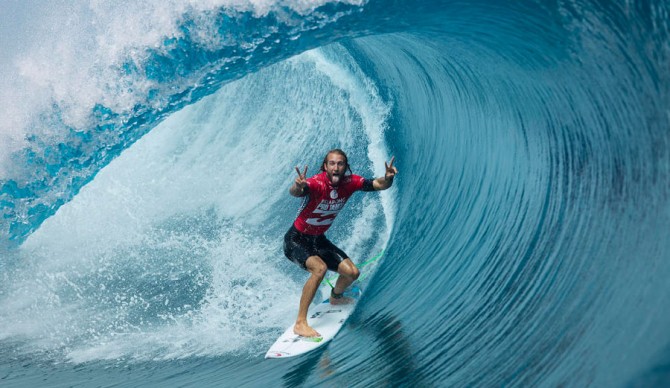 Judging competitive surfing is difficult. There are complex criteria to follow when trying to determine the score a surfer earns on a given wave. Commitment, degree of difficulty, innovation, progression of maneuvers, combination of major maneuvers… the list goes on. Sometimes, however, there is only one score to be given. Without consultation or consideration, the judges unanimously agree: the elusive perfect 10. Here are 10 of the best perfect 10s awarded during competition.

It’s difficult to score perfection with just one maneuver, but here’s Julian Wilson showing us how it can be done. Throwing a huge air and landing without faltering earned Julian the maximum 10 points at the 2013 Rip Curl Pro in Portugal.

Owen gets behind the green curtain for nearly 10 seconds on this one—you won’t find many barrels longer than this. A point for every second in the tube at the Fiji Pro at Cloudbreak.

Brazilian Gabriel Medina somehow comes out of this deep Hawaiian tube on his way to being crowned the 2014 World Champion.

Joel takes off on a bomb and gets blasted out of the barrel at Backdoor, earning himself the elusive perfect 10.

Nobody expected to see Kelly Slater emerge from this. It was truly one of the most hollow Brazilian waves ever. After disappearing behind the white water, Houdini somehow reappeared to claim his 10 points.

Powerful carves, a few cover ups, and a massive re-entry. Joel Parkinson demonstrates his diversity by tearing up this South African monster.

Another miraculous escape. It’s not possible to get much deeper and reappear on a wave like this. CJ Hobgood demonstrates exactly how to score the maximum at Teahupo’o.

Frenchman Antione Delpero shows us what the perfect wave on a longboard looks like. A series of graceful turns, high-energy performance maneuvers, and sticking some toes over the nose resulted in being handed a perfect 10-point ride. The view from the drone isn’t bad either.

John John and Kelly went head-to-head in Tahiti in one of the greatest heats ever seen in competitive surfing. Two killer drops, two amazing cover ups, and, of course, two perfect 10s.

Gabriel busted out this aerial to show us exactly why was the World Champion. The height, rotation, and speed almost defy the laws of physics.

We’d be happy to hear your suggestions for more deserving rides. And check out more from Tom at surfingsections.com.