We Spoke to the Team Bringing a Giant, Artificial Standing Wave to Oahu 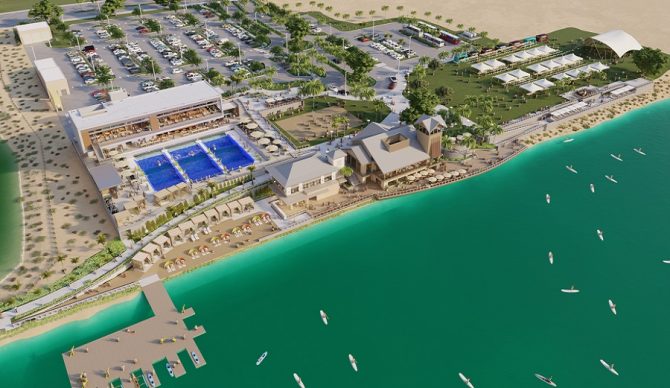 Digital renderings of the proposed resort, now under construction. The wavepool is in upper left. Photo: Wai Kai Resort

If you haven’t had your ear to the ground regarding the latest wavepool-industry news, you might have missed that last year, a massive pool and lagoon resort was proposed on the west side of Oahu at the Wai Kai Lagoon. Why am I telling you this now? Because as of last week, those plans were approved, and construction on the new resort has begun, including a 100-foot-wide standing wave using Citywave technology and in collaboration with Oahu local and decorated former CTer, Shane Beschen. However, the question begs itself. With so much incredible surfing already on the island, why bring a wavepool to O’ahu? I had a quick chat with Shane and Skip Taylor of Surf Park Management (one of the companies behind the project) about that very thing, and a few other tidbits about their vision for the Wai Kai wave and accompanying resort.

Wavepools, although relatively new,  have cemented themselves in our consciousness as an inland phenomenon – something to bring surf to the new, wave-hungry masses. But artificial wave technology has drastically improved, revealing answers to the above question (why on Oahu?). First, there’s the beginner-friendly aspect. Even when, like last weekend, 50-foot waves pound the North Shore, at Wai Kai, the surf stays consistently rippable and lessons and learning can continue, business as usual. According to the team, with two dividers, the 100-foot wide wave at Wai Kai can be turned into three separate features to accommodate multiple people at the same time, and the close, contained aspect will allow for direct, one-on-one coaching, even when you’re up and riding.

But Shane and Skip have a bigger vision for the wavepool than simply beginner surfing, seeing time on the wave as a great way for even advanced surfers to push their skills further. “When I’m in the ocean, each wave is so valuable, I often surf very conservatively,” says Skip. “Sometimes I won’t even try a huge hack because I don’t want to blow the wave. But when I’m in a wavepool, I know I have enough time to try stuff I would never normally try. And that’s when you actually start to progress, and feeling that progression over the course of one session is just so cool.”

Furthermore, when the waves on the North Shore are flat, pros will be able to congregate at Wai Kai to get their training fix. “What I’m excited about is moving the dividers and being able to ride the 100-foot wave,” Shane said over Zoom. “I think it’s really going to simulate a point break, giving you so much time to go down the line before you have to do a turn. That’s gonna really open up the options and allow much more real, ocean-like surfing. When you ride a 30-foot [wavepool], going down the line you get to the wall pretty quick. But I always thought in my mind like, man, if you had two more pumps, you could do anything you wanted. So I’m pretty stoked on that.”

Needless to say, the Wai Kai wave, when completed (sometime in 2022), will take the crown of “largest man-made standing wave in the world” from the recently-completed Citywave at Lake Chelan in Washington. For context, that wave is 54 feet across. Just think of how much speed can be generated on a standing wave with a 100-foot wide face.