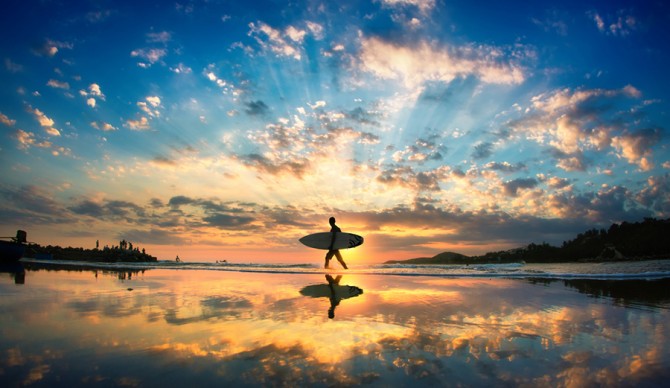 As a sailor and conservationist, I wrote a personal story about my world travels, inquiring into the forces that keep the earth’s waters in constant motion. In this age of drastic global climate change and sea level rise, it became a critical insight into our planet’s future. These 12 facts about the ocean’s tides are adapted from Tides: The Science and Spirit of the Ocean.

1. The tide is a very large, very long wave that travels around the world at 450 miles per hour. It has no beginning and no end. The 12-hour gradual rise and fall we see on the beach is the wave’s passing, first its crest and then its trough.

2. Water wells as far as inland as Wisconsin often fluctuate production with the tides, producing more water during flood tides and less water during ebb tides.

3. When the waters of the Red Sea parted to allow Moses and the children of Israel to escape Egypt, it may have been a tidal event timed perfectly by Moses, who lived near the Red Sea and knew that on an extreme spring tide there would be a dry passage across. He may, in fact, have timed his exodus precisely so that the Children of Israel would make it across, but the tide would rush back in while Pharaoh and his pursuing army were only half way across. Pharaoh, who lived on the tideless Nile, would not have been familiar with the Red Sea Tides.

4. There are about three Terawatts of power in the ocean’s tides. That’s three times the world’s daily energy consumption.

5. Tides create friction – a lot of it – by rubbing against the ocean floor. Some of this is dissipated as heat, just like when you rub your hands together. But most of it is transferred into energy that acts as a brake on the earth’s rotation. By a very small amount per day, the earth is turning slower and the days are growing longer, because of the tide.

6. Tide charts repeat themselves every 18.6 years.

7. The book that got Galileo in trouble with the Catholic Church was originally titled The Flux and Reflux of the Sea. Galileo used the sloshing of the ocean tides as proof that the earth moved, and therefore was not the center of the universe. His tide theory, by the way, was completely wrong, but because of it, he was sentenced to house arrest until the end of his days.

8. In the 13th century, Leonardo De Vinci believed the tides were caused by the breathing of a giant beast and tried to calculate the size of its lung.

9. The oceans resonate with vibrations from the moon and sun, just as a guitar body resonates when a string is plucked. A lot of resonance creates a larger tide; less resonance creates a smaller tide. George Darwin, son of the famous evolutionist, speculated that tidal resonance was so strong early in earth’s history that it threw a piece of earth out of the bottom of the Pacific Ocean and into space. That piece of earth was captured by the earth’s gravitational field and became the moon.

10. The world’s largest tidal bore – sometimes twenty-five feet tall – is on the Qiantang River in China. The Silver Dragon has been racing up the Qiantang on every tide, every day, for 2,500 years.

11. 160 billion cubic meters of water rush in and out of the Bay of Fundy during an average 12-hour tide cycle.  That’s four times the outflow from all the world’s rivers in the same amount of time.

12. The astronomical forces causing the tide (the moon and sun) don’t just affect the ocean. Their gravitational forces produce tidal movement everywhere, including the solid earth, the atmosphere, and even in your morning cup of coffee.

Editor’s Note: You can learn more about the author and his most recent book Tides: The Science and Spirit of the Ocean, here, as well as on Facebook and Twitter