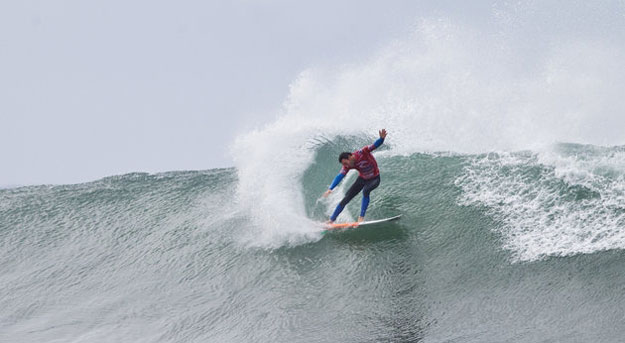 When predicting the 2012 WCT champ, most would argue that it’s crazy to assume anyone but Kelly Slater would be atop the podium in December. He’s the safe pick, right? Granted, the odds are heavily stacked in his favor. He has won the last five of seven world titles, and he has a seemingly superhuman ability to turn it on when he needs a score the most. To no one’s surprise, he takes out most competitors with regularity except for a couple hiccups competing against Owen Wright in New York and Adriano De Souza in Portugal. However, I am of the opinion that none of these top competitors will hoist the World Tour trophy come December 2012.

My pick is 31-year-old Australian veteran Joel Parkinson, commonly referred to as “Parko.” He has never finished better than second overall on the World Tour in any given year, but he has done so three times (2002, 2004, and 2009). I believe this is his year to turn on the jets and take one home for Tweed Heads and the Gold Coast as Mick Fanning did in 2007 and 2009. The natural-footed Aussie will win in 2012 because after a very solid start to 2009 (taking three of five events), an injury in Bali saw him slide down the rankings list and out of title contention behind eventual World Tour winner Mick Fanning. Joel looked like he was putting together a great campaign for the 2009 season, but we were all left wondering, “what if?”

Unfortunately, Parko started off 2010 with a devastating injury to his heel at Snapper Rocks, which put him out of competition just before Billabong’s Jeffrey’s Bay contest and kept him sidelined for the year. With a full year to recover and reformulate his plan of attack, Joel was ready to rip.

Fast forward to the 2011 season. Parko came back with a vengeance, finishing second at the four-star Breaka Burleigh Pro, which might be just what he needed to get his confidence going to start the season. He then won at Bells Beach and finished fifth and third at Rio and J-Bay, respectively. To wind down the season, Joel snagged two fifth-place finishes at Trestles and Peniche. This is the most impressive part of his season, considering the cherries on top were second-place finishes at back-to-back events in San Francisco and Pipeline — the proving grounds for surfers looking to make it known that they are the real deal. The impressive part about the way he ended 2011 was that he finished second at Ocean Beach, an iffy beach break by Dream Tour standards, and then again at Pipe (a notoriously shallow reef that produces drastically different waves).

I believe this is Parko’s year not only because he came back strong after two bad injuries in consecutive years, but also because his smooth, in-control, and powerful style affords him high scores in various conditions. The question this year is if the change from beach break contests at New York and San Fran to reef and point breaks like Fiji and Santa Cruz are just what the Aussie veteran needs to strut his stuff to the podium. Fiji is placed between Rio and J-Bay, two contests in which Joel placed very well last year. Scoring well in Fiji could give him serious momentum and points through the three-event stretch. Looking to the end of 2012, the Santa Cruz contest is scheduled between Portugal and Pipe – contests where he finished in fifth and second place. The order of 2012’s new contests leads me to believe that Joel could gain a lot of ground through at the first half of the year and finish very strong toward the end as well. If he surfs Teahupo’o and France better than last year, we may watch Parko raise the World Tour trophy in December.