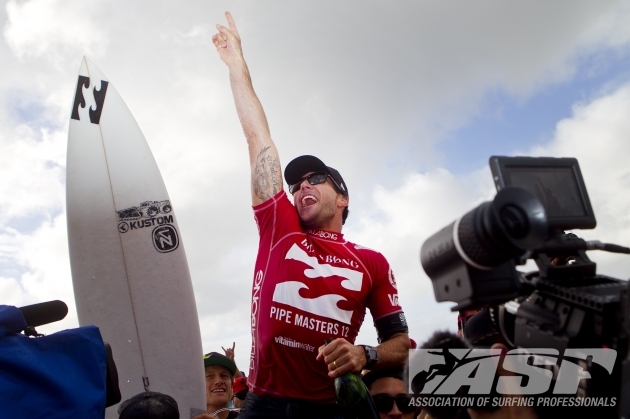 At the beginning of the 2012 ASP World Championship Tour season, the talk around the water cooler had much to do with which rookie would blow up and snatch World Title dreams from the tour’s veterans. Names like Gabriel Medina, John John Florence, Julian Wilson, and Kolohe Andino were uttered in the same breath as legends like Kelly Slater, Joel Parkinson, and Mick Fanning.
After much hope and even more hype, Joel Parkinson claimed his first World Title.

In a piece I wrote before this tour season started, “2012: Year of Parko?” I predicted that Parko would trump the field. He has finished second four times, a record that may never be broken, but claiming the title of World Champion continually eluded him. This year, Parko surfed his way to no worse than a Round 5 finish (in Fiji) in every event. It’s fair to say the nickname “Mr. Consistency” was well earned. His results over the course of this year are a testament to his nickname:

This season was notably better than his 2011 run, as Parko didn’t make any Round 2 exits this year. His worst finish, which was dropped, was equal 9th—the only blemish in an otherwise stellar season.

It stands to reason that he’s only grown stronger both competitively and physically since his gruesome heel injury at Snapper Rocks in February of 2010. He came back to finish the subsequent year at second in the world. As for this year, consistency proved key for Joel. His smooth style propelled him from heat to heat. Even at new tour stops like Cloudbreak and Steamer Lane, Parko excelled.

The Pipe Masters came one heat short of an epic final that would have treated us to the drama of Kelly and Parko squaring off for surfing’s highest title. Instead, dogfights defined the day as Kelly Slater squeaked by Shane Dorian, Joel Parkinson took out both Hobgood brothers, and Josh Kerr’s victory over Kelly rendered Parko this year’s world champ.

In the end, the new world number one got his first event win of the year where it mattered the most and hoisted not one but two of the most prestigious trophies in surfing all in the same hour. #GoParko