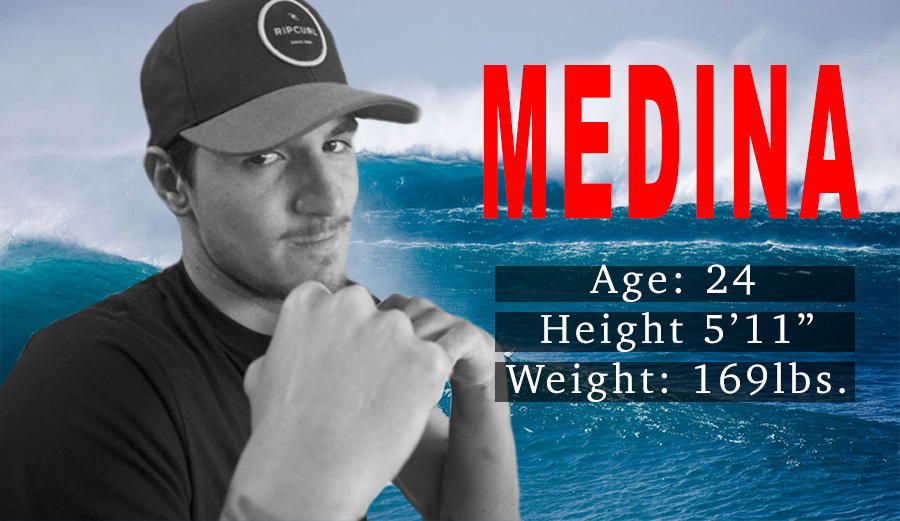 According to some amateur statistical analysis of the current crop of surfers on the men’s Championship Tour, Gabriel Medina falls into the category of the most favored age, weight, and height. Coincidence? Photo: Heyden (Modified version of photo by Steve Sherman)

We spend a great deal of time on this here website putting the world’s most elite surfers under the microscope. We’ve written about their diets, workouts, and the like in an effort to understand what gives them a competitive edge at the highest level. Truth be told, it takes a lot more than innate talent, time in the water, eating right, and working out to surf on the Dream Tour.

In Outliers, Malcolm Gladwell searches for commonalities among society’s most gifted achievers to develop a fairly provocative thesis. He argues that the stories of the most talented, successful, and wealthiest human beings in the world (from Bill Gates to the Beatles) can all be reduced to people with a little talent that flourished under a confluence of favorable factors beyond their control. For the Beatles, the group got unprecedented time on stage to hone their craft in Hamburg, Germany. Bill Gates had access to early computers back when it was often difficult and expensive.

Gladwell’s most compelling example is actually centered around hockey. Canadian professional hockey players, he argues, are predominantly born just after the annual age cutoff date – typically January, February and March. In other words, at a young age the additional months of development typically result in those players being bigger than their peers. So what, if anything, does this have to do with surfing? Well, if Gladwell’s thesis holds, the top surfers in the world should be the result not just of talent but of additional factors outside of their control – proximity to the beach during childhood, physical attributes, etc.

A quick look at breakdowns of three indicators the WSL maintains for nearly every male CT athlete – age, height, and weight – yields interesting results. Height, especially, is outside of an individual’s control. Age, as they say, waits for no man. And weight fluctuates to a degree but is also an indication of body type. This analysis focuses expressly on the men’s CT given the sample size is larger than the women’s CT. 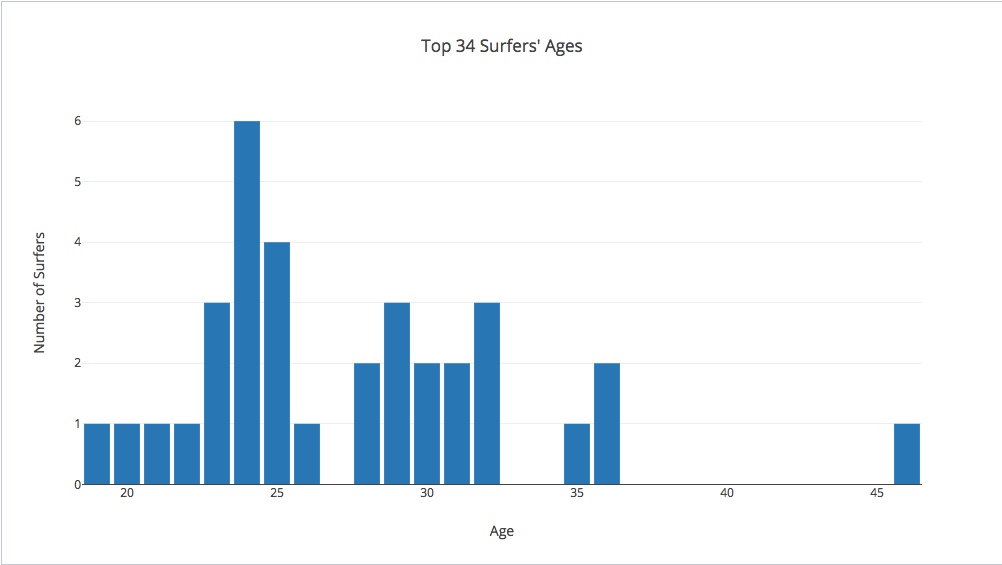 Data on age follows a leftward skew that’s typical of most professional sports. The logic, of course, dictates that the sport’s physicality more or less dictates longevity. In the NFL, for instance, the drop-off from 25 to 30 is significant and only gets more pronounced among older athletes. In the NHL, the distribution is less clustered around the sport’s young bucks. On this year’s CT, Griffin Colapinto (19) and Kelly Slater (46) represent the lower and upper outliers. The lion’s share of the top 34 CTers (about 22) is between 20 and 29. 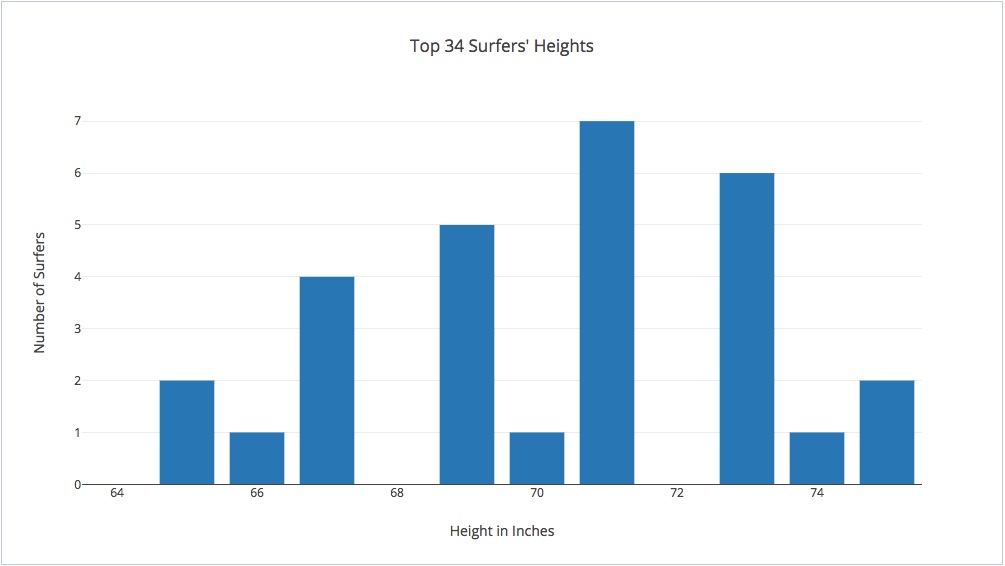 The distribution of height is where things get a little interesting. A while back contributor JP Currie penned a compelling treatise outlining why 5’9″ is the optimum height among professional surfers. “Short people rule surfing,” he wrote. Since, it looks like things have shifted to about 5’11”. Without knowing how the WSL gets its numbers on stature – e.g. whether they do the measuring or it’s self-reported – we have to take into consideration that most men lie about their height. (Lookin’ at you, Tinder champs!) That might explain why so many athletes measure in at 5’11” or 6’1″ because 6’0″ would make the lie suspect, but let’s give these height stats the benefit of the doubt. Nineteen of the top 34 – that is, more than half – are between 5’9″ and 6’1″. Seven surfers are 5’11” (the biggest group), and six are 6’1″ (the second largest group). That said, consistent with Currie’s thesis, twelve surfers on tour are 5’9″ and under whereas 3 surfers (Jordy, Owen Wright, and Zeke Lau) are over 6’1″. The logic being the diminutive thrive while the giants oft fall. 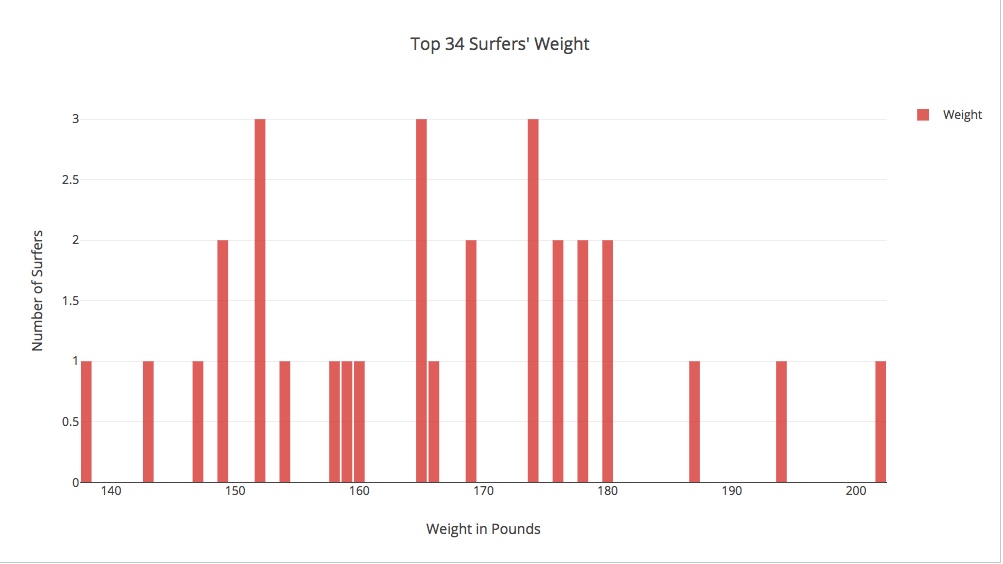 Finally, weight. Again, it’s unclear whether athletes self-report here, but let’s take the stats at face value for now. Unlike the more dispersed distribution in height, weight has a tighter clustered distribution right around the 160-179lb mark. Eleven surfers weigh less, five weigh more. That said, the histogram above shows three weights with the highest representation, 152 lbs., 165 lbs., and 174 lbs. In other words, a normal distribution with a pesky spike around 152 that suggests again that the welterweight and super middleweight weight classes are both well represented on tour. Light heavyweight and above, less so.

All told, the stats hint at the ideal CT surfer being about 24 years old, 5’11”, and between 165 and 174 lbs – let’s call it even and say 169 lbs. (Interestingly, one surfer on tour fits that profile exactly: Gabriel Medina. Medina is actually the perfect physical embodiment of a pro surfer in 2018.). The smaller, it would seem, have some representation, but the taller and heavier do not.

Why you ask? Here’s a non-exhaustive non-scientific theory that boils down to surfing favoring an average if not wiry athletic build. Being that contests are marathons not sprints, the sport favors tone over bulk, stamina over brute strength. Notice not a single surfer on tour is built like a linebacker, the only one who comes close is Michel Bourez, but at 5’9″, 176 lbs. and he’s about three inches shorter and 20 pounds lighter than the average cornerback (the shortest and lightest players on average NFL, according to SportsChart).

A quick comparison between the data above and the graph below shows that if we were to plot surfers by height and weight, their builds wouldn’t be bulky enough to play football, hockey or rugby, they’d be too short for play basketball, and too tall and heavy for ski jumping or gymnastics. The only sport where body types are comparable is in Major League Soccer.

And maybe that’s the point. Pro surfers are pro surfers because they’re competitive, driven, and talented and not built to do anything else except maybe soccer.