3 Times the Surfing World Made Us Laugh This Week 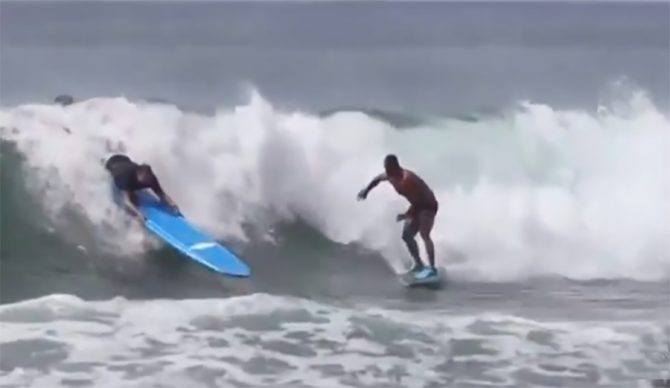 “You gotta laugh a little, cry a little, and let your soft-top break a little….” Side note: Is that guy standing on a boog with fins on? Impressive. Not the drop in, the fins. Photo: KookSlams

Gawd, surfing is so serious isn’t it? What with all the lineup drama, industry drama, competitive drama, Olympic drama, it’s easy to forget that the Pastime of Kings was meant for truly one thing: having fun. Fun, people! Have some. That’s why it’s nice to concentrate on funny things. Funny things that make us laugh, and funny people. And there were several funny things that made me chuckle aloud this week. If you didn’t notice them, you should have.

Topping the list is the (almost) always funny Ivy Miller (below). The surf and snow pontificator brought the heat with this brilliant use of some Instagrammy, Tik-Toky app that allows one to change friends’ faces to the opposite sex. You know the one. She then asks herself in a sexually ambiguous manner, “How many shots would it take for me to hook up with my friends as dudes?” An interesting question: “Next we have Coco? Sober. Hot!” Not to be missed is Ivy’s same take with her guy friends. You’ve never seen Mark McMorris look like this.

Next up? Mr. Ryan Buell. Honestly, the man is always doing something, well, a little less serious, be it wiffle ball or rapping. Oh and he runs a pretty decent wetsuit brand, too. Here he is setting up for what looks to be a shoot for something less than serious. Ryan constantly looks like he’s about to step to the mic and drop mad game in your face – like he kinda does here. How are those glasses? If you wanna hear the Buell Wetsuits owner rap over my bad beat boxing, try this. He’s the jockiest, rappiest, surfiest dude we know and it’s not even close:

Okay, I hadn’t peeped on the old Raglan Surf report in a minute, and this wasn’t last week, but it was another classic from your favorite Kiwi surf…commentator, of which there has to be at least two, right? Kiwi surf commentators, that is. Anyhoo, how’s this Yago Dora meme where RSR lays a quick little clip of Nicholas Cage in Con Air over a quick little claim from Yago Dora during the WSL’s Australian leg? So good. Claiming is inherently funny for all the wrong reasons.