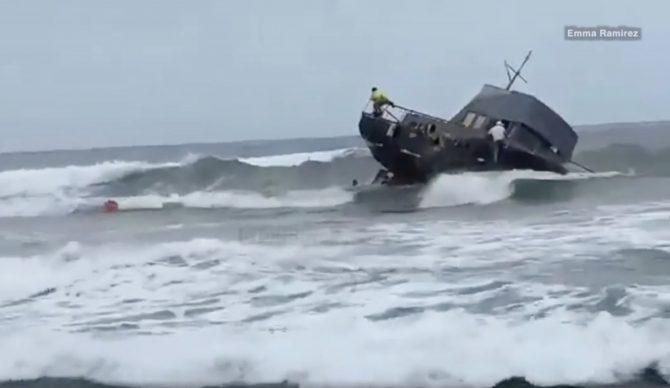 A 40-foot suspected smuggling boat gets caught in the shallow reef off Point Loma. Image: Screenshot.

On Sunday, four people were killed and 25 injured when a 40-foot vessel overturned near Point Loma in San Diego that was suspected to be a smuggling boat, according to the San Diego Fire-Rescue Department.

At 10 a.m., Lifeguards responded to a report of a boat drifting into the surf line at Dolphin Tanks, a surf spot at the tip of Point Loma.  A witness video (below) showed passengers jumping off the boat as it overturned amidst five to six-foot surf. The boat slammed onto the reef and quickly broke apart into debris while the passengers tried to get to shore. Bystanders jumped into the water to help the passengers. 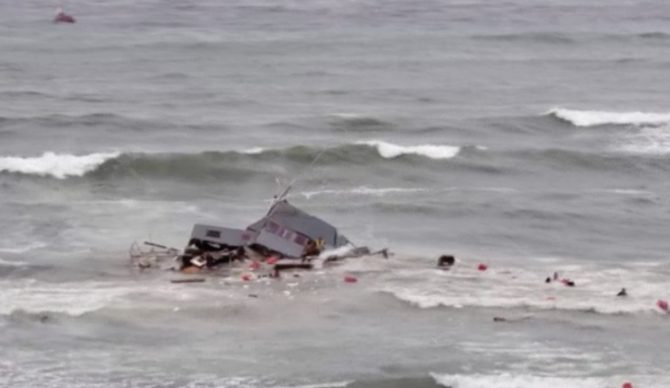 The vessel quickly dispersed into debris on the jagged rocky-reef coastline, leaving passengers swimming for their lives. Image: screenshot.

San Diego Lifeguards, San Diego Fire-Rescue, San Diego Harbor Police, and the U.S. Coast Guard all responded to the incident. When lifeguards arrived on scene, they rescued victims caught in the rip currents and searched for people amidst the debris. Two people were found faced down in the water, and rescuers reportedly performed CPR.

Four people were pronounced dead and dozens of others were rushed to the hospital, sustaining injuries ranging from hypothermia to trauma.