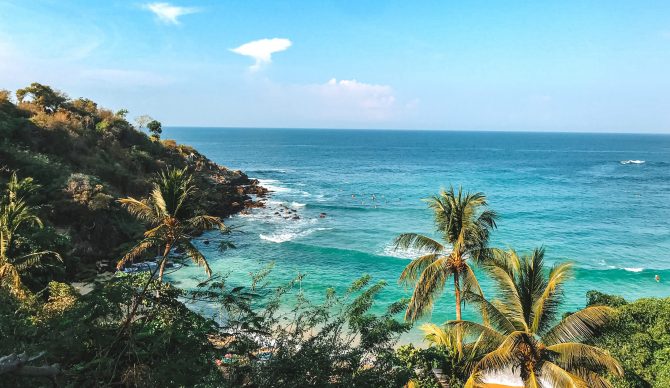 With the endless barrage of swell raining down on Oaxaca this time of year, the eyes of surfers around the world are always fixated on the elevator drops and deep barrels at Puerto Escondido. But right now with the World Surf League’s Corona Open Mexico running, the tranquil village of Barra de la Cruz has both the world’s best surfers visiting and a global gaze on the surreal sand bottom tropical cylinders of Oaxaca.

Oaxaca is more than just a destination for waves, though. It also contains globally important coastal ecosystems, a myriad of unique wildlife species, and vibrant indigenous communities. The undeveloped state of this wave-rich zone (with the exception of Puerto Escondido) and its unaltered watersheds and coastline contribute to the exceptional quality and diversity of point waves. That, in turn, fuels the rare ecological conditions that result in wildlife and rich ecosystems seen in few other locations in coastal Mexico.

Coastal Oaxaca is influenced by the Isthmus of Tehuantepec whose Tejuano winds and other biogeographic features have produced rare coastal dunes next to patches of tropical forest as well as upwelling in the Gulf of Tehuantepec, which in turn results in an amazing abundance and diversity of ocean life. It is these contrasts that make its protection vital, not just for surfing, but for the health of the oceans worldwide.

This also includes the continued well-being of Oaxaca’s residents, especially indigenous communities that depend on natural resources, many of whom still deeply feel the stinging loss of their villages from the development of the coastal resort city of Huatulco.

With all that in mind, here are five resources we must continue to protect to preserve the miraculous and stunning coastal resources of one of North America’s most unique regions:

1. Connected and Undeveloped Coastlines and Watersheds

The coast of Oaxaca offers up what is increasingly rare in a tropical Pacific Mexico that has been hammered by urbanization, coastal tourism development, pollution, and deforestation (especially in the states of Michoacan and Guerrero): undeveloped coastal ecosystems connecting mangrove wetlands to watersheds and tropical forests.

Looking southeastward from Barra de la Cruz, endless green mountain vistas of the Sierra Madre del Sur fill the view and culminate in the 12,200-foot Cerro Nube at its southerly edge. Just down the beach from Huatulco is the mouth of the Copalita River that offers up whitewater rafting and hundreds of thousands of acres of tropical forests, home to some of Mexico’s most important watersheds, now referred to as “water reserves.”

While Huatulco is obviously a tourist resort, its development included the formation of the 29,400-acre Huatulco National Park and the preservation of local coral reefs and coastal wetlands and forests. That forward-thinking conservation is unique among Mexico’s heavily developed coastal resort cities.

Coral bleaching is a threat to coral reefs worldwide. But somehow the corals of Mexico’s Pacific have not seen the type of damage faced by Australia’s Great Barrier Reef. The coral ecosystems of Huatulco National Park are the southernmost in Pacific Mexico and home to a wide variety of wildlife species. Unfortunately, they have been impacted by overuse from tourists. Currently, the organization WILDCOAST is working with Mexico’s National Protected Area Commission to train outfitters in best management practices and place mooring buoys around the most fragile reefs to prevent damage from anchor drops.

Starting in the summer months, especially Escobilla and Morro Ayuta, tens of thousands of olive ridley sea turtles arrive to lay their eggs on Oaxaca’s beaches. In Barra de la Cruz, the protected beach and RAMSAR Wetland of International Importance play host to the most important remaining population of nesting leatherback sea turtles in Mexico. These marine reptile leviathans that face extinction due to threats caused by industrial and commercial fishing, only leave the ocean to lay their eggs (and only the females).

The sea turtle activity in Oaxaca is remarkable given that the now hipster tourist village of Mazunte down the coast from Puerto Escondido was once the site of Mexico’s notorious legal sea turtle slaughterhouse. Sea turtles have come back thanks to government protection, the cooperation of local communities who benefit from sea turtle conservation, and the preservation programs of the Mexican Sea Turtle Center at Mazunte.

“By preserving natural ecosystems, the carbon they have already sequestered remains stored in the ground. When these blue and green carbon ecosystems are destroyed, they end up releasing carbon dioxide into the atmosphere, worsening the climate crisis,” affirms WILDCOAST Associate Director Zach Plopper. “So we need to not only protect every inch of Oaxaca’s treasured natural ecosystems for the sake of the people and wildlife that thrive there but for the sake of preserving our planet.”

These ecosystems are also home to humpback whales off the coast, along with jaguarundi, jaguars, anteaters, resident and migratory birds, deer, iguanas, and rare and other threatened marine species.

There is increasing recognition of the need to safeguard globally unique surfing sites as protected areas and World Surfing Reserves. The sand-bottom breaks of Oaxaca, which include Punta Conejo, now threatened by the proposed expansion of the port in Salina Cruz, are more than worthy of permanent protection. They are rare and treasured ecological features, coastal and marine ecosystems, wildlife habitats, and recreational, cultural, and economic resources that help to drive an important part of the local economy in Oaxaca.

Without more formal conservation protections, Oaxaca will fall prey to the same forces that have ravaged coastlines and natural ecosystems around the world. There is still time to make sure that this magical coastline retains its extraordinary resources and raw beauty so local communities and surfers continue to benefit from and enjoy Oaxaca’s natural wonders.

Editor’s Note: Serge Dedina is the executive director of WILDCOAST and the author of Surfing the Border, Wild Sea, and Saving the Gray Whale.