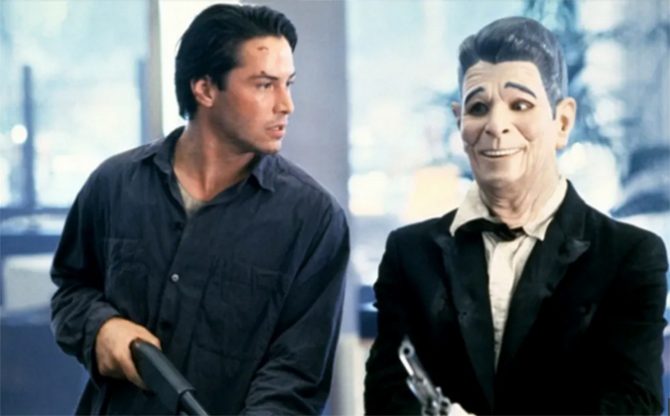 “Can we just get the Goddamn money and get out of here?” Photo: Screenshot

There’s something about the worlds we play in that attract a certain sort of character. In general, people who’ve dedicated their lives to the shred lifestyle think a little differently. There’s a bit of hyperbole here, but most cats who surf 30-foot waves or ride 10,000-foot peaks with reckless aplomb might not feel like society’s rules apply to them. And maybe they don’t? With the giant swell predicted to hit Bells Beach this week, I was reminded (like most fans of the cult flick, Point Break) of Bodhi, one of the great criminal masterminds of our time, albeit a fictional one whose crew robbed banks to finance the pursuit of tasty waves.

But there are real-life criminals out there doing the same thing, and I’ve found five you might not have heard of. I tried to avoid the tax evaders or addicts who were simply caught up in life (no judgment here) and tried to focus on those that used the big scores to score pow or waves – or simply finance a lifestyle. It took some serious (I mean serious) internet research and I may or may not look up to them in some perverse way. Enjoy and don’t be afraid to yell at me and tell me who I missed:

Yosemite’s Score of a Lifetime

One winter night in 1976, just before daylight, a plane piloted by Jon Glisky and carrying one passenger, Glisky’s colleague Jeff Nelson, swooped above California’s Central Valley towards the castle-like peaks of the Sierra Nevada mountains. Earlier that night in Baja, the plane had been loaded with 6,000 pounds of Mexican red-hair marijuana. Minutes later, the plane crashed into Lower Merced Pass Lake high above the Yosemite Valley. Not much is known about the drug smugglers’ fate in the moments before the crash – they were smuggling, after all, and were off radar – but the felonious looting that followed the crash is legendary as rumors of the downed plane loaded with valuable contraband spread throughout the park.

The Stonemasters, a hard-charging group of talented climbers living in Yosemite’s Camp 4 at the time, were some of the first to loot the plane, searching out the score of their lives. That spring, though, Park Rangers knew something was up when dirtbag climbers started leaving large tips at the local cafe, showing up in new cars and carrying shiny new climbing gear. Some climbers funded trips, others bought camera gear with the weed they were able to pull out of the frozen lake that winter. But the crash site started bringing in nefarious characters from the lowlands and by summer, park officials had cut off the meal ticket. Men’s Journal published a fantastic piece on the episode in 2014 (a recommended read). No arrests were ever made. “There were climbing trips to France and Asia and blowouts that are still the stuff of legend,” wrote author Greg Nichols. “It’s likely the biggest windfalls exceeded $20,000, a tremendous amount of money in 1977. But the climbers tended to live fast, and in most cases, the money didn’t last long. The story has fared better.” 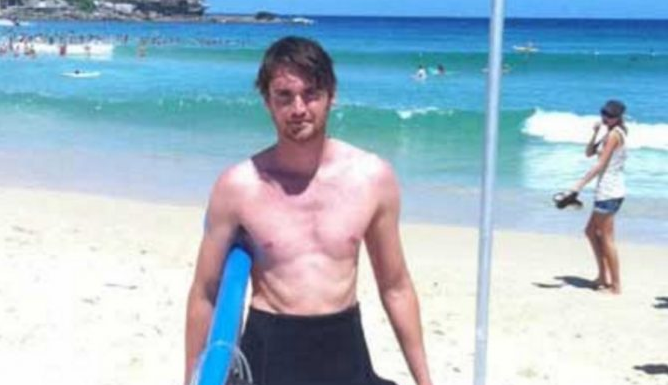 Ulbricht did his damage from internet cafes. Photo: FreeRoss.org

A Silk Road to Nowhere

Our own Chase Scheinbaum wrote about Ross Ulbricht’s story in 2017 when the book on his life was released. But it still enthralls me as a story of modern criminality in the internet era. Ulbricht is a capable surfer, raised by parents who owned an eco-lodge in Costa Rica where he first tried wave sliding as a child. If you haven’t heard of the Dark Web, maybe keep it that way, but the highly-educated Ulbricht created a site there called Silk Road, where, using bitcoin, people could trade in anything including narcotics, sex, and even murder for hire. Ulbricht chased waves around the world, working on his site under the admin name, Dread Pirate Roberts, as he slipped in and out of surf hostels and internet cafes like an anonymous backpacker. When he was arrested in San Francisco in October of 2013 on charges of money laundering, computer hacking, and conspiracy to traffic narcotics, authorities froze $28.5 million in assets accumulated by Ulbricht. He was convicted and sentenced to two back-to-back life terms. There’s currently a campaign underway to free him. If you’re looking for more surf-related crime kingpins, keep your eyes on a new series from Wavelength magazine profiling Surfers Turned Criminal Masterminds. 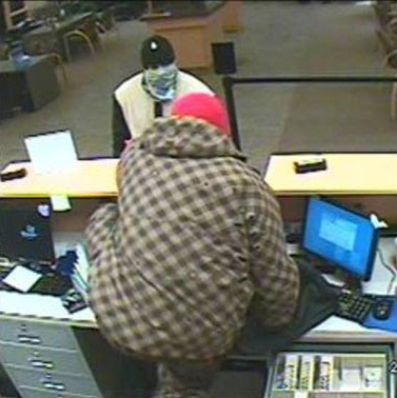 Just like Point Break, one of the bandits would jump up on the counter while the other would mind the customers. Photo: FBI-released image

Not to be confused with the “Snowboard Bandit,” who was busted in Riverside, California, the “Snowboard Bandits” (above) went on a bank robbery spree in Colorado’s Front Range in the early 2000s to fund their pow-slashing habits. But instead of dead presidents’ masks, they wore, yep, shred gear. One even wore an afro wig underneath goggles to help conceal his identity. Michael Jason Martinez was sentenced to ten years in prison as the Bandit’s ringleader in 2009. In all, the crew hit 11 banks in Colorado over a two-year period before the FBI caught up to them. Apparently, they liked to snowboard Aspen, Vail, and Keystone. And they were stoked on the Point Break comparisons they got in prison with Martinez telling Denver’s Westword that he liked the fact that fellow inmates called him Patrick Swayze. 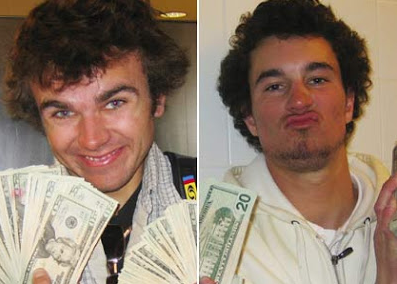 These guys weren’t really on the ball. Luke Carroll and Anthony Prince had cased the bank they eventually robbed in Vail, Colorado in 2005 – one they apparently used as customers  – before they stole more than $130,000, apparently escaping using snowboards. According to reports, they left a massive trail in their wake. A teller at the bank recognized their accents and they reportedly wore nameplates similar to those used by a local ski and snowboard shop where they worked. Police also recognized their descriptions from earlier in the season, when they were arrested for shooting paint ball guns in East Vail. They then proceeded to flaunt selfies while holding cash and tried to mail money to their native Australia and New Zealand, where the press in those countries had a veritable field day with the robbers, dubbing them “Dumb and Dumber.” They were apprehended at the Denver airport on their way to Mexico when police used mugshot photos to identify them in the security line. Carroll, who was 19 at the time, was sentenced to five years while Prince, also 19, received four and a half years in the clink.

Now, you might have heard of Missy Giove from Vice‘s excellent story on the former pro mountain biker, above. But if you haven’t, check it out immediately. During the late 1990s, mountain biking as a sport was coming into its own. Giove was one of the sport’s stars, signing million-dollar contracts while tearing her body to pieces. Eventually, after the industry slowed and injuries and age caught up to her, the train came to a stop. Giove needed other ways to fuel her lifestyle, so she delved deeply into drug smuggling, transporting massive quantities of marijuana across the U.S. These days, many of the states she carried weed across have legalized the plant in some form, but at the time, she was at the forefront of a bold black-market operation.