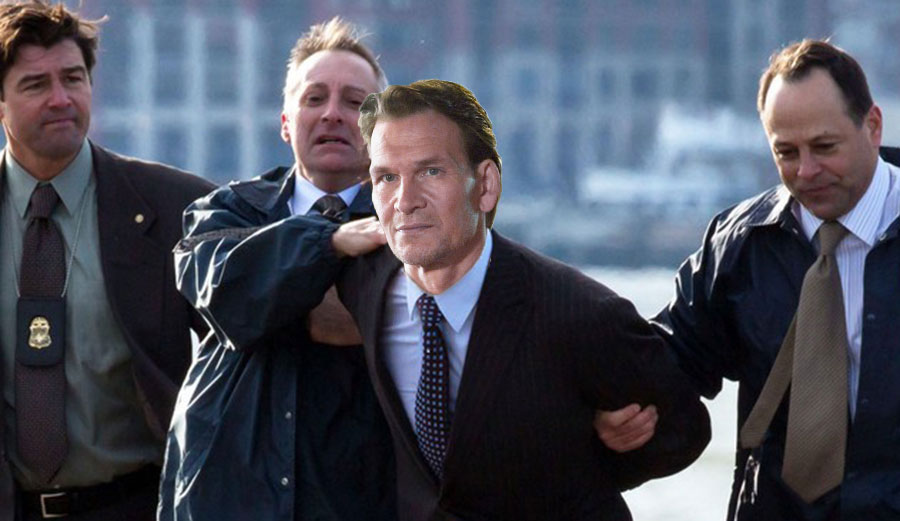 Bodhi, who had been living under the alias Angelo Pappas, was apprehended when an attempted bank robbery went awry in a small New Zealand town.

A recent arrest in the tiny New Zealand town of Hokitika has revealed that Bodhi did, in fact, paddle to New Zealand, despite the cliffs on both sides.

In 1991, the disgraced leader of a rogue outfit of bank robbers who called themselves the Ex-Presidents escaped from the FBI. He was attempting to surf Bells Beach at the peak of the infamous 50 Year Storm when we finally caught up with him. After a scuffle that ended with me handcuffing myself to him, he became irate. “NO!” he shouted through the driving rain. “You know there’s no way I can handle a cage, man. Where am I going to go? Cliffs on both sides… I’m not going to paddle to New Zealand!” Swayed by his conviction and a lengthy history that, in retrospect, probably should’ve precluded me from the case, I decided to let him catch one wave. He paddled out, fell, and disappeared. A massive search failed to recover his body, and Bodhi was pronounced dead. Shocking real-life footage was shot by an amateur videographer on the scene:

Now, more than two decades after Bodhi was declared dead, Hokitika officials have made a surprising discovery. Late last week, an elderly male botched a bank robbery when he leaped onto a desk, attempted to moon a security camera, and fell to the floor, knocking himself out. Authorities arrested the man without incident. According to a bank teller, the fall occurred while the would-be robber was attempting a getaway. The Donald Trump mask he was wearing slipped partially over his eyes while he bent over to expose his buttocks. “If he had just kept going, he totally would’ve gotten away,” the teller said, shaking her head. “He had the money in the bag and everything, but he just HAD to moon the camera. He had written ‘thank you’ across his butt, which must’ve required an accomplice or a tremendous amount of flexibility.”

The robbery was eerily reminiscent of the Ex-Presidents’ early 1990s heists, many of which were caught on camera. In the months after Bodhi’s presumed death, an unnamed source at the FBI leaked a tape of one such robbery to the press, who had a field day.

After the arrest, Hokitika Police Chief Colleen Hornburger was elated, although strangely flushed. “He had this flowing blonde mane like a lion,” she said, fanning her throat with her hand. “You could tell at one point he was a real heart-breaker. He’s probably 70 years old and, well… I’ll be frank: I’d totally do him.  Just now, I had a daydream that we were making a clay pot together in my basement with sunlight pouring in through the window. That’s how impressive this man is.”

The stunning revelation that the robber’s real identity was that of the renowned thief Bodhi came after authorities were unable to confirm the name he gave them. “He told us his name was Angelo Pappas,” Hornburger explained, “but when we looked into it, the only Angelo Pappas we were able to find was a retired FBI Agent who now owns Gimme Two, a small chain of California-based restaurants specializing in meatball subs.”

When police questioned the man further, he broke down and confessed to his real identity. “I made this crazy escape, paddled 1,500 miles, lived in this podunk town, worked as a god damn pool boy and a busker and all sorts of demeaning jobs. I’ve been living this horribly boring life,” he told reporters from his jail cell. “I mean, before, I used to rob banks and jump out of planes and surf huge waves! I just couldn’t take it anymore. I had to tell someone. I did it! I fucking did it! I paddled to New Zealand! Suck it, Johnny Utah!” 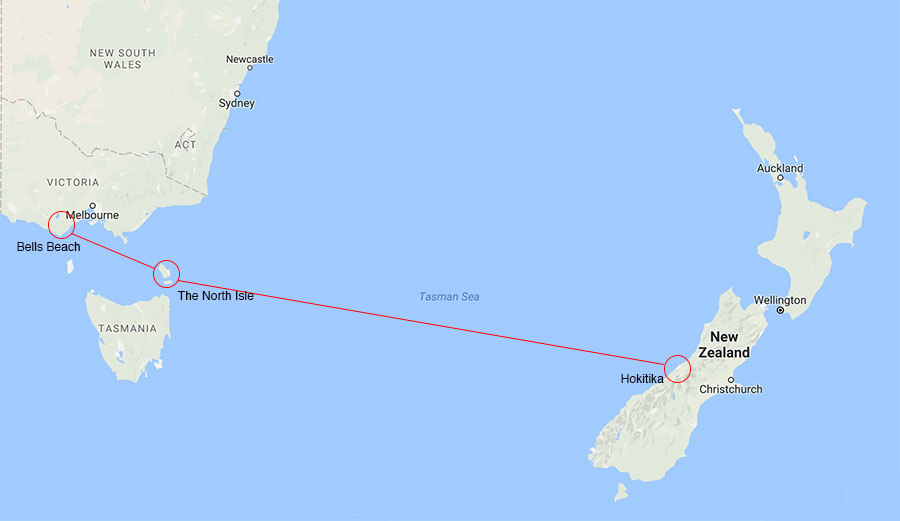 Bodhi’s escape route went from Bells Beach to the Tasmanian Island of North Isle, then on to a small town in New Zealand.

The escape, which occurred in the winter of 1991, was nothing short of miraculous. After falling on a wave at Bells Beach, Bodhi turned and paddled out to sea in the middle of a maelstrom. First, he landed on a tiny, uninhabited island off Tasmania’s north east coast called the North East Isle.  Setting up a shelter made from rocks and sticks. Bound by strands of his own strong, flowing hair, Bodhi lived mostly on crabs, seagulls, and the urine of pelicans. “It was wild,” he said of his time on the island. “That’s what made it so interesting. You can do what you want and make up your own rules. Why be a servant to the law when you can be its master?”

After nearly four months meditating and surfing an “insane slab” just off Anvil Rock, he set out for New Zealand on his surfboard. Towing a small raft covered by a roof thatched with his own hair, he used a makeshift fishing rod to catch fish and drank the morning dew that collected on his broad, tanned shoulders. The trip from the Tasmanian island across the Tasman Sea was just over 1,200 miles in length and covered one of the most dangerous bodies of water on earth.

When asked how he knew it was time to leave the relative safety of the North East Isle and attempt a journey that probably should have killed him, he had a simple response: “Fear causes hesitation, and hesitation will cause your worst fears to come true,” he said. “The little hand said it was time to rock and roll.”