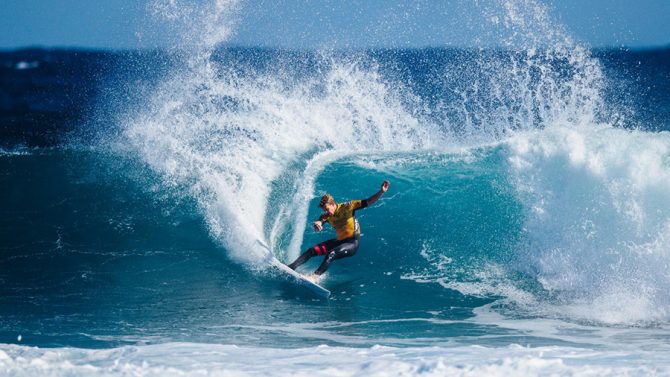 John John Florence, surfing out of this world before ruining his knee. Photo: Dunbar/WSL

Objectivity and fanaticism always contradict each other. In fact, I recently had a lengthy conversation with a good friend about why and how sports fans, in general, suck. Any and all critical thinking skills that would typically be applied to judging the flaws, choices, mistakes, skills, success, or failure of a team or athlete fly out the door when a person gets emotionally attached. I’m guilty of it. You’re guilty of it. Any NFL fan who still thinks Tom Brady is a “class act” is guilty of it.

Now that I got my Tom Brady jab out of the way, let’s just allow the sentiment to set the table for what’s going to be an unpopular opinion: John John’s knee made the CT infinitely more interesting this year.

I’d use the word “better” but that’s far more subjective than “interesting.” The 2019 world title chase, without arguably its best all-around surfer in the mix, is a more intriguing watch right now than it would have been with his points lead growing…and growing…and growing. At least that’s the world title race we were looking at before John Florence’s knee cut his year short for the second consecutive season.

So yeah, things are a bit more interesting.

It was only back in June when The Inertia’s Senior Editor Joe Carberry had a conversation with the two-time champ and bluntly asked him — already holding two contest wins on the board and a massive points lead — if he was doing the math in his head for a third world title.

“I’ve never had a lead this big so it’s hard to look at it that way as it’s still relatively early, a lot of things can change,” Florence said. “I’m not really keeping track of points. It’s definitely too early for that. Even if I did win this event, there are still six events left. Gabriel won two events in Europe one year, that’s a 20,000-point jump. So I don’t start thinking about it at all if I can help it, at least counting points.”

It’s kind of an eery response in hindsight. Florence withdrew from the Oi Rio Pro three days later, eventually announcing he’d ruptured his ACL — the same knee that took him out midway through 2018. And while I think we’d all happily snap our fingers and go back to a world where Florence is running away with his third world title and the most interesting thing about the tour is guessing who will qualify for the 2020 Olympics, we have to admit the shake-up created some intrigue. Here are five scenarios that suddenly became more interesting with John’s injury:

Kelly Slater wasn’t going to the Olympics with John on tour. Sure, anything can happen, he’s the GOAT, all that stuff. But Florence’s withdrawal opened the door for a goal Kelly’s been verbal about for some time now. He’ll be 48 when the Games open in Tokyo next summer, which would be a fascinating thing to see and talk about in itself. But even though none of us fully understands how a person does or doesn’t qualify for Olympic surfing, Slater’s chances weren’t looking great a couple months ago.

When the ISA announced its selections for the ISA World Games, one integral step in the Olympic qualification process, Kelly was on the outside looking in to represent Team USA, sitting behind Florence, Kolohe Andino, and Conner Coffin at the time.

…But It Also Sets Up Kelly v. John

John John sitting out the rest of the season didn’t eliminate the man from making Team USA. Invited athletes have to compete in the 2019 and 2020 ISA Games in order to qualify for their Olympic team…unless they’re injured. So Florence actually holds favor to the one exemption that could keep him on Team USA come next summer.

Slater actually still has to make up more than 10,000 points on the Jeep Leaderboard before overtaking Florence in the rankings as the second-ranked American on Tour. And that includes having to jump Rookie of the Year favorite Seth Moniz in the rankings as well.

Could we see JJF at Pipe to defend his points lead against Kelly if his qualification is in doubt?

There’s Parity On the Podium

Competitors regularly win multiple events in a Championship Tour season. There are typically one or two people who do each year, putting them in the mix as one of the two, maybe three surfers at most who have a chance at the title come December. Gabriel Medina won three events in 2018 and 2014 — his two world title seasons. Florence won two in 2016 on his way to his first title. Adriano de Souza won two in 2015. Kelly’s last two titles came with four and three first-place finishes respectively.

Inevitably, this lends itself to the eventual champ running away with a massive points lead that locks up their title before the tour leaves Europe. And that gets boring.  We were facing that this year. Florence won two events before his injury and managed an equal fifth in the event he pulled out of (the Oi Pro), so it’s conceivable the guy would’ve had three top finishes in the year’s first five events. That doesn’t bode well for parity.

What we have now are six different winners through seven events. Seeing a different face on the podium each event is actually refreshing.

The yellow jersey’s already been passed off from John John Florence to Kolohe Andino and now on to Filipe Toledo in the less than two months. The top four surfers on the Jeep Leaderboard are separated by less than 2,000 points (Toledo, Jordy Smith, Kolohe Andino, and Gabriel Medina respectively).

We could easily see a different surfer wearing the yellow jersey to begin each of the last four events on tour. Who knows if that’s ever happened?

Pipe always matters because it’s Pipe. But in the context of a world title race, Pipe doesn’t always matter. In fact, we’re in crunch time now where every round of the remaining four contests are going to be critical.

There are currently seven surfers in the top 10 within 10,000 points of World No. 1 Filipe Toledo (six if you exclude John John). If you look at all their results (Jordy,Kolohe, Medina, Italo, and Kanoa), only Italo has an equal 17th that will stick with him. Everybody else’s equal 17s are throwaways, meaning there is literally no room for a bad heat if any of those six surfers want to win a title. An exit before the quarters down this stretch could torpedo any of their bids at a world championship.