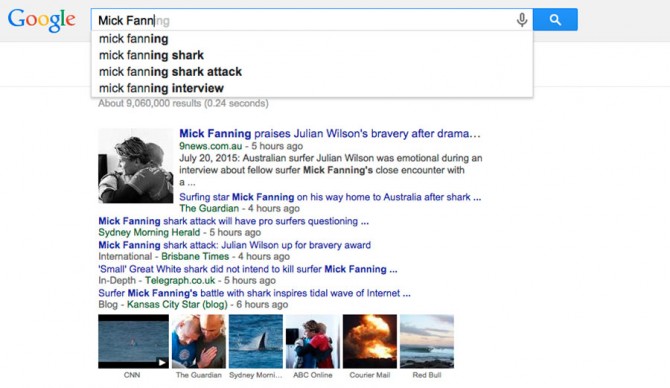 Can it be that hundreds of news sources are sensationalizing one story? Or are they all catching on to something?

Many of you are already groaning at the legs this story has. It’s barely been 36 hours and it’s become the most shared, talked about, and published story across every news source in the world. “Get over it already,” seems to be a common gripe by the people who think this is a sensationalized story. I get it, this wasn’t an actual “attack.” It was an “aggressive encounter” as The Inertia Editor Michael Woodsmall articulates. But the fact is, you now have a lot of questions now that may not have existed before Mick Fanning encountered every surfer’s most ignored fear in the final of the J-Bay Pro. I say it’s the most ignored fear because, well it is. Unlike any other potential danger in surfing, arriving face to face with a curious, hungry or scared great white shark is the one thing we all simply push out of sight and out of mind. But now it nearly happened in a live broadcast. In the heat of the moment there were millions of people watching from the beach and on their laptops thinking they were witnessing a man being eaten alive. It’s a gruesome exaggeration of what actually played out, but that’s exactly what mainstream media outlets, your friends and family who don’t surf, and the people blowing up your social media news feed, are so infatuated with. The (nearly) worst case scenario happened live, for us to see with our own two eyes, and that makes it real. That’s why this became a huge international story in an instant, and it’s not going away anytime soon.

Surfers and non surfers alike, 24-hour news networks, national sports networks and sports talk radio shows are all talking about the one sport where getting attacked by an apex predator is a real thing. This doesn’t happen in any world other than surfing. Kelly Slater said himself we’ll be talking about the moment for the next 20 years. So here’s five discussions and questions you can now expect in a world post Mick vs Shark:

What will happen to the J-Bay Pro? 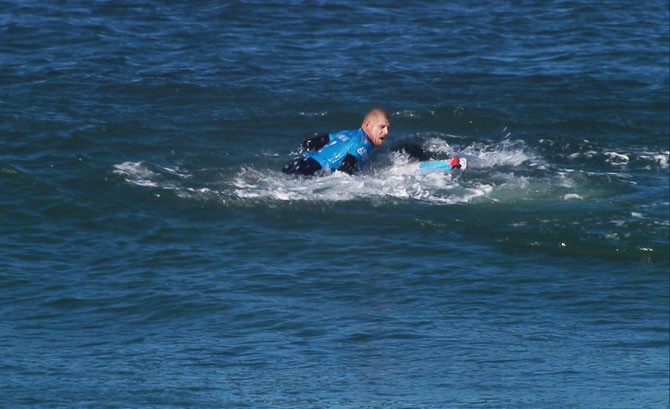 Could the longest moment in professional surfing history be J-Bay’s last? For now, it’s very possible.

Don’t be surprised if J-Bay is wiped off the WSL’s itinerary, at least for the near future. We’re not talking about abolishing the Pipe Masters or Bells. As far as holding its place in the history of surfing, J-Bay isn’t untouchable. It may not happen and it could come off as a complete overreaction to this year’s incident but professional sports organizations have a tendency to be reactive rather than proactive. Andy Irons’ death played a key role in the WSL’s existing drug testing policy. Or an extreme example of this being the NFL’s suspension of running back Ray Rice in 2014 when he hit his then-fiancé in an elevator. The eventual sanction was dictated by the public’s opinion, and the gruesome reality caught on camera, than any pre existing moral standard throughout the NFL. The question WSL CEO Paul Speaker and Commissioner Kierren Perrow will be asked behind closed doors is if they want to be responsible for, god forbid, this happening during another South African competition. Is it likely to happen again? No. But would you want to make that call?

How will the WSL address the safety of their athletes?

You ever notice just how many boats and skis seem to be just sitting right on the shoulder at Teahupoo every year? I get that the wave itself offers to a different layout of the lineup and what surrounds it, but it honestly felt like an eternity from the time Fanning turned around to see that fin and the moment he and Julian Wilson climbed to safety. What if the outcome hadn’t been so fortunate, and the WSL realized they could have/should have done more to keep their athletes safe? Do there need to be more skis and water safety personnel on hand, and do they need to be floating around even closer to the action? You, the viewer, may not care what changes are made in hopes of keeping the top 34 safer or even think it’s a relevant topic in the grand scheme of things. But there will be some changes.

What does this do to Mick’s Legacy? 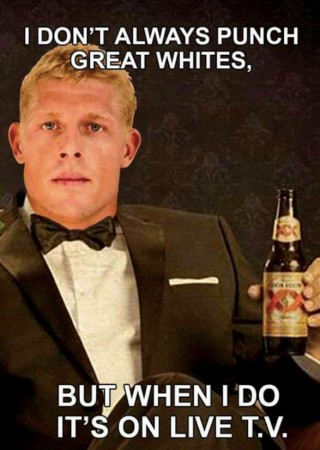 Of all the guys on tour, this is probably the one fella who hasn’t surprised you by punching a shark in the middle of a contest. Who else can you imagine handling this situation the same way Fanning did? He’s a 3-time world champ. We loved him before this happened. But now there’s an entirely different element added to his legacy that’s already blasting past Chuck Norris levels of bad-assery. Mick’s fame is going to transcend surfing now, for good and for bad. Don’t be surprised if and when you see him walk out onto the set of Jimmy Kimmel Live or the Tonight Show very soon. Why’s that? Because…

Mainstream pop culture is going to be even more infatuated with surfing.

Here we go with the “surfing’s not mainstream” haters. The internet memes may seem trivial, but that kind of phenomenon just attached White Lightning’s face to the exact thing people who don’t surf ALWAYS want to talk to us about first. Outside of surfing Mick will be that surfer. That’s what will make him relevant to people who don’t surf. A month ago Paul Speaker sat down with FOX’s Stuart Varney to talk about professional surfing’s growth in the business and entertainment world. Varney compared watching a live surf broadcast to watching NASCAR, in that part of the draw is the possibility of seeing something really horrific. It’s an ignorant thing to suggest to somebody who appreciates competitive surfing because they actually like to watch people surf, but now we’re seeing that exact reaction play out in real time. Just go to your Facebook feed now. 90% of the outlets reporting on this aren’t surf related. So I guess Varney had a point.

Wow, that’s a broad one. Thanks Juan. But the point is there isn’t much time to do anything but suit back up and get out there. The Tour is off to Tahiti next, with a week layover in Southern California for the Vans US Open of Surfing. The event in Huntington starts not even a full week after the J-Bay final. Mick and Julian just settled for 2nd place points, when winning that heat would have propelled either of them into the #1 ranking on tour. Adriano de Sauzo has the lead by just 250 points. What if those points are the difference between Mick and Adriano in December? What if those points kept Julian Wilson from capturing his first world title? And how much extra attention in and out of the surf world will be thrown at Huntington Beach as the contest immediately following J-Bay, ironically experiencing its own shark hysteria this summer? Mick says he’s happy not to surf a heat again, so what will it be like when he does put on that jersey? You think there might be just a few cameras pointed at him leading up to his next wave caught in competition? As much as our social media feeds are filled with “holy sh*t this guy just punched a shark,” once the dust settles there are a lot of what ifs and what nexts that are going to start playing out for Mick Fanning and the rest of the top-34.