Professional surfing will never be bigger than it was today. Never. Period. It’s not happening. Whatever aspirations the WSL has to expand surfing, well, take a good hard look at the numbers from July 19th, 2015 and be aware that we have come eye to eye with surfing’s ceiling. 14 Million views and counting on the World Surf League’s shark attack Facebook video in less than sixteen hours. Tack on several multi-million view videos surrounding the event and every major media outlet from Perez Hilton to the New York Times reporting on what happened to Mick Fanning – heretofore known as “that shark guy.” That’s that. Unless, of course, the WSL could replicate the attack in Huntington during the US Open. And they could get Kelly Slater to participate this time. Then it would be one hundred times larger. But as it stands, today was as big as it gets, because today marked not only the craziest moment in professional surfing, it might rank among the most outrageous moments in all of sport.

Consider this. An apex predator attacked an athlete while competing on his designated playing field DURING a live webcast. Have you ever seen a grizzly bear maul a pro snowboarder in a half pipe during the X-Games? Or a lion claw a soccer player during a World Cup qualifier? Well, today, we saw a Great White Shark attack a surfer at Jefreys Bay in South Africa. And it put surfing and surfing’s governing body under a security microscope that has always, always, been dreamily hypothetical. There has never been a shark attack at a WSL event before. That’s just a question that someone who doesn’t surf asks you as soon as they find out that you surf. Until today. And it reinforces the shark hysteria sweeping our world’s oceans in the most disturbingly affirmative way.

The WSL responded by expressing its commitment to its athletes safety by canceling the remainder of the contest and issuing the following statement:

“The safety of our athletes is a priority for the WSL and, after discussions with both Finalists, we have decided to cancel the remainder of competition at the J-Bay Open. We appreciate the ongoing support we have in South Africa and once again want to express our gratitude to the Water Safety Team.”

So where to from here? How will the WSL approach future contests? With shark nets? With sharkproof wetsuits? Will we never see another heat at Jeffreys Bay again? I wouldn’t be surprised if the WSL answers yes to all those questions. After all, the collective surf world’s nightmare was just broadcast live across the planet. We almost saw one of surfing’s greats die in front of us. We saw the fear in his eyes and his body tremble as he attempted to communicate what had just happened to him. We saw him fight for his life. He threw punches at the nose and back of a 10+ foot Great White Shark.

We saw Julian Wilson cry as he relived the moment in his head.

“I was like oh, he’s gone,” said Wilson, choked up. “He’s gone under, and I felt like I couldn’t get there quick enough. I was scared I wasn’t going to get there in time.”

“The instinct of the surfing family is to help,” said announcer Peter Mel.

Mick Fanning might never discuss his world titles again. They don’t matter. (They do a little.) But only a little. Today, in a sense, he became immortal. He will forever be known as the guy who fought a Great White Shark in front of a global audience and lived to tell about it. Unscathed, no less.

“All of the sudden I had this instinct that someone was behind me, and then I started getting pulled underwater,” said Mick Fanning after the attack. “I’m totally fine. I’ve got nothing wrong with me. I’m just totally tripping out.”

And Julian Wilson didn’t paddle away from him to save his own life. That wasn’t his instinct. He headed straight for it. Without a second thought, he put his life in danger if it might save the life of his friend.

“Today was one of those days you hope you’ll never experience in life and to see you stand your ground and fend off that monster,” Julian wrote on his Instagram. You’re my hero mate. So happy I could give you a hug on the boat with all limbs in tact. You’re the true definition of living by the sword.

“Life’s a lot more important than a surf contest,” said Kelly Slater. “I don’t think Mick is too worried about getting first or second right now. All of us just almost watched our friend get eaten by a shark.”

How do we make sure it’s always almost? 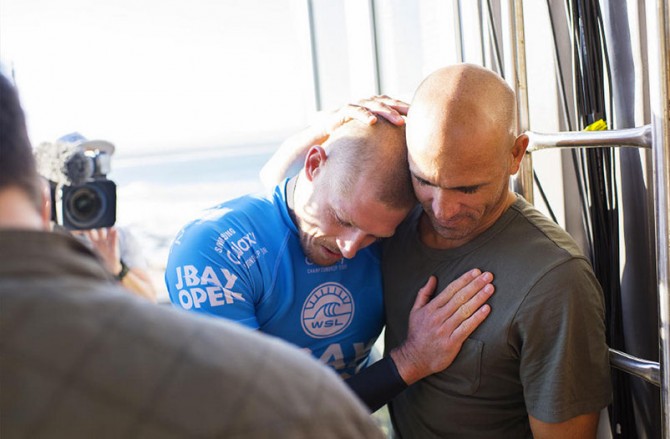