Date: February 13, 1997
Place: Alligator Rocks, North Shore, Hawaii
The Moment: Caught inside at Outside Alligators, an outer reef with 20- to 25-foot waves (with 50-foot faces), Chesser was found tangled in the rocks near Waimea.

Once described by Surfer as “the greatest non-rated surfer in the world,” Todd Chesser tore through the scene in the nineties. Born in Florida but raised in Hawaii, Chesser followed in his accomplished mother Jeannie’s footsteps and became one of the island’s top-rated amateur surfers (like his mom was in the seventies). Despite finishing fourth in the 1990 Professional Surfing Association of America tour, Chesser decided his time was better spent chasing swells as a big wave surfer. A frequent contributor to Surfer, Chesser proclaimed in a piece about the dangers of big-wave surfing: “If you know the basics, the danger is minimal.”

Like Foo before him, Chesser was one of big wave’s bigger personalities, and his skill and drive had him scheduled to act as a stunt surfer in In God’s Hands. But the morning he was supposed to fly out to Maui, the surf was too good in Oahu to pass on, so he decided to stay at home. According to the Los Angeles Times, Chesser was paddling outer Alligator with two friends when he got caught insight, reportedly standing on his board before diving down to make it under one of the waves. Held under, he resurfaced in a semiconscious or unconscious state. His companions quickly converged to help, but another set rolled through, sending each surfer in their own direction. When the waves had cleared, Chesser was nowhere in sight. Hours later they found him tangled in the rocks near Waimea, unable to be revived.

He became the third big wave surfer to die surfing in just over two years. Leaving behind a fiance mere days before his 29th birthday, his close-knit community in Hawaii came together to mourn the loss of their spirited charger.

“I’m still having a hard time believing he’s gone,” Ron Hill told the Star-Bulletin when the news broke. “We called him Cheese, he always had a smile for you. He was such a gutsy surfer but a very caring person who always remembered to send a postcard to my wife when he was away.” 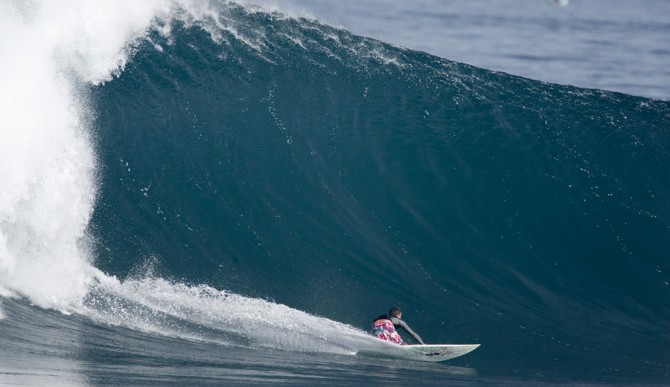 Joyeaux on the last wave he rode before the fateful one he would catch next. Photo: Sean Davey

Date: December 2, 2005
Place: Pipeline, North Shore, Hawaii
The Moment: Hit over the head by a thunderous lip, Joyeux is knocked unconscious and drowns at Pipeline.

Malik Joyeux was one of Tahiti’s best known professional surfers, even featured on the cover of Surfer‘s 2004 “Big Issue.” Coming to fame as the “petit prince” who charged Teahupoo, the goofy-footer was awarded the Billabong XXL 2003 Tube of the Year for riding one of the biggest waves ever.

On December 2, 2005, Joyeux took off deep on an eight-foot wave (Hawaiian) at Pipeline. Joyeux reportedly barely made the wave, with the nose of his board sinking into the face, disastrously slowing him down. Attempting to regain his pacing, he wasn’t able to pick up speed fast enough, and was he slammed by a heavy lip, instantly breaking his board and sending him under. Aamion Goodwin, riding the next wave, would later mention that the leash of his board was completely intact and still attached to the board; but with no leash, Joyeaux was impossible to locate.

“About half the lineup cleared out,” Greg Long, who was sitting on the Backdoor side of the peak when Malik took off, told Surfline. “And a bunch of guys came up from the beach too, everyone yelling ‘Malik’s down!’ We all formed a line and were looking around the reef underwater between sets for any sign of color.”

Fifteen minutes later, another surfer, Myles Padaca, found him at Pupukea beach break, to the right of Pipeline. Lifeguards and paramedics attempted to resuscitate him but failed to do so. An autopsy revealed that he had likely been instantly knocked unconscious when the board came up and hit him in the head.

His death exemplified the everyday hazards these surfers encounter. “I was paddling for the same wave,” Randall Paulson, a lifelong Pipeline local, told the New York Times. “I pulled back and let him go. I just wanted to see my friend get a good wave. That was the last time I saw him alive.”

At his home in Tahiti, he was an avid proponent of the “No Ice in Paradise” anti-drug campaign.