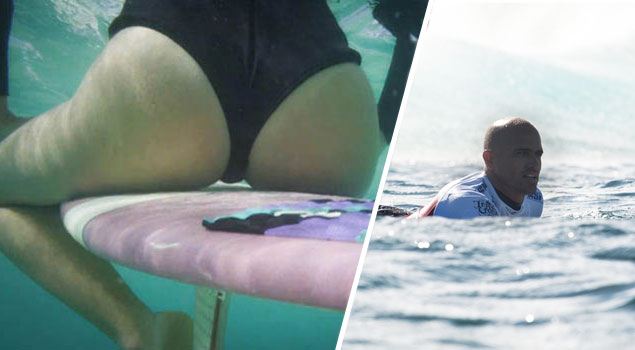 It’s the beginning of a new year. The future is now. We have 365 days looming ahead of us, and big things will happen, both in the surfing world and out. How exciting!

Don’t get me wrong. I love Kelly Slater’s surfing. I would love for him to go on winning forever. But there is almost nothing sadder than a man that used to be king desperately grasping at his throne while the new king kicks at his hands. I want him to leave the castle before he gets kicked out. The way I see it, he has two options for 2014.

1: He can win 12th World Title and shock no one. We’re all so used to it now that it’s more of a surprise when he doesn’t win. But still, like a rom-com, although we know what’s going to happen, we love it. And if he wins this year, I’ll bet he calls it a day and moves on to bluer pastures with better waves than the tour can offer.

2: He doesn’t win a title and still retires. Yeah right. If I were in his shoes (which I am not. I am a size 11, and I would never be able to squeeze into his), the only way I’d retire is if John John Florence wins a World Title. He’s the best surfer in the world right now. Kelly knows it. And he’s the only one that can take the torch from Kelly… but here’s the thing about Kelly: no one’s taking the torch unless he passes it to them.

Ah, butts. As much as some want them out of surfing, they will continue to play a large part in it – some larger than others. Unless someone (I’m not taking this on) can convince the entire straight male population that butts are not attractive, we will continue to see endless amounts of narcissism not-so-cleverly disguised as a marketing ploy, and working just fine for both parties. The argument of butts vs. no butts will continue unabated, and despite the loudly-spoken lack of interest, the interest will remain high, if only to shout about the lack of interest.

Every year, the Women’s Tour gets a little bit better. The women are raising the performance bar on their side of the sport much faster than their male counterparts are, and slowly but surely, people are noticing, and they’re noticing more than their butts. With the exception of things like the Surfer Poll and social media – which are nothing more than a high school popularity contest, talent seems to be superseding looks. With the recent inclusion of new stops on the Women’s Tour, more money in the prize purses, and ZoSea’s fuzzy takeover, 2014 will be a banner year for women’s surfing. And it’s about time.

Oahu’s demon right now is Monsanto.  Whatever your stance is on the GMO giant, if you live in Hawaii, it’s probably been swayed by public opinion. 2014 will see Hawaii rise up against their Goliath, effectively keeping the country country. The soil will return to its previous, pristine cleanliness, the farmer’s crops will no longer be affected, and Monsanto will apologize from bended knee.

Ha! Monsanto will continue to do what ever they want with their testing grounds, enraging residents while continuing to not give a shit and laughing at the protests from behind their piles of money.

Dane Reynolds will do nothing of note for the majority of the year. He will continue surfing at an insanely high level while pretending that he doesn’t care about surfing at an insanely high level. He is the king of the Don’t Cares – the ones that care so much more than everyone else. Here’s where they’re conflicted, though: they care so much about showing how much they don’t care. It must be very confusing for them, but the kids are falling for it and Quik is making a mint off of shirts with childish drawings on them and poorly made videos that took forever to make look like they didn’t take forever to make.

This year’s finish line spotlight was taken up by surfing’s three kings. Slater, Parko, and Fanning showed that the old guard is still a real thing. But 2014 will the year of the kids. The young guys will open fire, with Nat Young and John John Florence leading the charge. There seems to have been a slight disconnect with the aerial movement and power surfing for a couple of years, but there a few Tour-babies/young bucks that have an amazing mix of power surfing and aerial game – and it’s been a long time coming. JJF will continue to blow minds, but still struggle with contest surfing, while Nat Young will take his competitive prowess as far as he can push it.

ZoSea’s take over of the ASP will prove to be a good thing, despite all the grumblings. Prize money will increase, skyrocketing tour costs will drop, and surfers on tour will be happier. No more Bobby Martinez outbursts. Surfing will begin to enter the realm of other professional sports, which, as much as people argue that it will, won’t increase the already crowded lineups. Their inclusion of the Big Wave World Tour will be the biggest selling point, strictly because the non-surfing public wants to be shocked and appalled. They want the carnage. ZoSea’s purchase of the ASP is like handing the reins of a bucking horse from a child to a real cowboy: the horse will settle down, and the child won’t get bucked off.