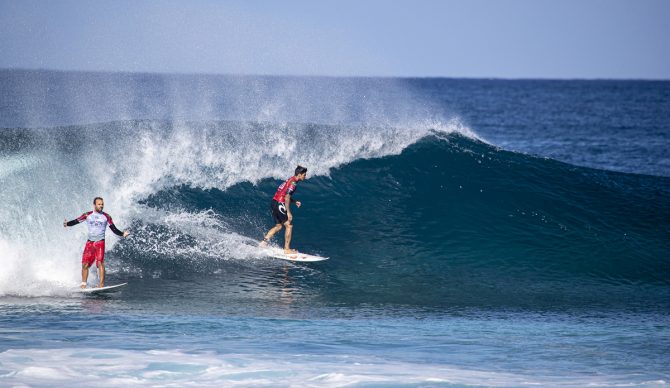 Just give us more of this, and we’ll watch no matter what. Photo:  Heff/WSL

Did anybody else spend Finals Day of the 2019 Billabong Pipe Masters screaming at a screen, perpetually pacing the living room rather than taking a seat on the couch? There was a villain. There was a hero. There was controversy. Pipe was firing. And above all else, there was a title on the line all day from start to finish — one thing professional surfing has never been able to coordinate and control, only lucking into the occasional championship surf-off between the last two standing for a world title (the last time it happened was when Andy Irons and Kelly Slater battled for a title in 2003). According to the League, that 2019 action resulted in more eyes on a CT broadcast than ever before.

Naturally, the WSL wants to capitalize on the momentum that comes with running the last heat of the year with everything on the line.  They’re betting big that the fans want that on a regular basis, too. Will it work? Will we all love surfing’s new “WSL Final?” How about that mid-season cut? Here are some pros and cons of the new WSL format, according to what some other sports (and similar title formats) have taught us.

PRO: There’s always something on the line, and therefore, always a reason to watch.

Do you know why fantasy sports are so popular? It’s simple: take something a person has no natural rooting interest in and give them some skin in the game. Suddenly, magically, Average Joe cares about the outcome.

Well, now we have a format where the WSL has introduced an obvious reward/consequence system for each contest. From the mid-season cut-off to championship day’s elimination bracket, as a fan, it’s much easier now to understand and see the urgency of more heats. And you don’t necessarily have to have $100 riding on it to care…unless you want to.

CON: Top seeds are going to run the show.

The NCAA basketball tournament is one of the most popular bracket-style tournaments in all of sports. And you know who always has the inside track to winning it all? The top seeds. In fact, in the NCAA’s modern bracket era, there’s almost a 63 percent chance that a number one seed will win it all in the annual field of 64. A number one seed is almost four times more likely to win the entire championship than the next-best seed.

At first glance, the tour’s new seeding system for “The WSL Final” looks like it heavily favors the top seed with a shorter path to the championship. That doesn’t bode well for parity in surfing. While, yes, technically the championship will be decided on the last day (and heat) of the season, we’ll be able to look back on earlier moments in the year when a title was won or lost based on where it seeded a given athlete. Think of Gabriel Medina’s and Caio Ibelli’s controversial interference in Europe last year, giving Italo Ferreira the inside track heading to Pipe. There will be upsets with the new format, but if statistics from other sports are any indicator, Number 1 seeds may regularly come out raising trophies while lower seeds go home early.

Okay, this is where things can get really fun. A big piece of Finals Day 2019’s popularity wasn’t just the heat between Medina and Italo, it was that the day started with multiple players. There were five athletes that day who had a chance to come away the 2019 world championship, and there is nothing more widely loved in sports than a Cinderella story — the David who slays Goliath. Momentum could always work in the Cinderella’s favor, taking the Number 5 to a title.

CON: It’s not happening at Pipe.

This one is just a tough pill to swallow. Period. The world champion being crowned anywhere else in the world just feels off.

Until 2014, college football didn’t have a championship game, instead having its 100-plus Division I programs play out their 10-ish game seasons, celebrate the few who punched tickets to a prestigious bowl game — which was really just an expensive exhibition — and watch who the coaches and press vote as top dog when it’s all said and done. The champion was rarely, if ever, decided on the field, so the end of your typical college football season used to be much like professional surfing’s annual visit to Pipe: a proverbial victory lap for whoever’s already wrapped it up.

Then the NCAA instituted a title game, preceded by a simple two-round playoff to close it all out. Fans. Love. It. And the money is ungodly; the bowls that make up the College Football Playoff (Rose, Sugar, Orange, Fiesta, Peach, Cotton, and national title game) paid out a combined $549 million to conferences and schools in 2018-19.  The proof is in the pudding: people watch when they know a title is on the line and the revenue speaks for itself.

I love you. I am one of you. But you’re kind of the worst sometimes.

Rule changes, location selection, judging calls, or even the correct enforcement of an existing rule isn’t just cause for debate with surfers, it’s a matter of personal offense. We’re uniquely tough to please when it comes to affairs of competitive surfing, but I get it. We love to surf, not just watch. We are passionate about this thing we do, and therefore we’re passionate about those who subjectively do it best. So maybe this is a pro, considering the WSL threw a little fuel on our fire by giving us something to root for (or against) when the next season wraps up. Or there’s the possibility of an outright revolt to this whole format change from fans the world over. At this point, nothing would surprise me.

NASCAR’s Cup Series is probably most similar to what a new Dream Tour looks like now. In 2004, the stock car championship circuit moved from an aggregate points scale (similar to how the CT operated until today) where the overall winner was crowned, often with an anti-climactic finish. In its place, they instituted a midseason cutoff where 16 drivers compete for the championship in the final ten races of the season. Everybody in the series still races, but the ante is upped for the 16 drivers in position for a championship, and NASCAR instilled rules that would protect non-title-eligible drivers from sandbagging it down the stretch. The playoff format has seen some changes through the years with a massive popularity surge and the sport’s highest overall viewership coming in 2005, immediately after the first playoff-style year.

One thing is certain in all of this: the competitive aspect as we know it will never look the same.