A Board Kelly Slater Signed Sold for $25,000 in Under an Hour 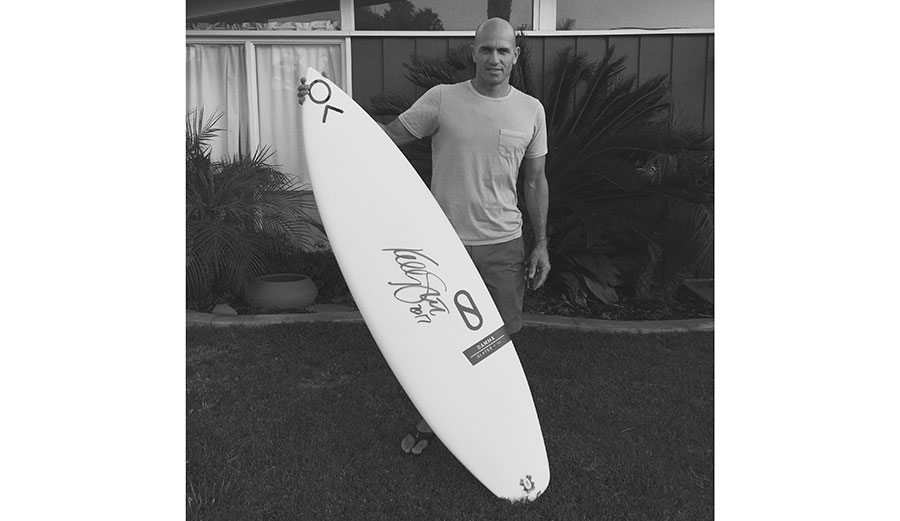 Kelly Slater touched a pen to surfboard and made it worth $25,000. Photo: SurfAid

Kelly Slater has won a lot of trophies for sliding around on top of waves better than anyone else. Over the course of his 25 some-odd years, he’s hauled in eleven world titles (sort of twelve, if you count the one he won twice. Ha ha! Math!), and over 50 WCT wins. There are a bunch of other things, too, but I’m too lazy to name them or look them all up because you know he’s the winningest surfer ever and greatest athlete and dated Pam Anderson and blah blah blah. Also, he’s handsome and has green eyes and he’s pretty much the only surfer non-surfers know other than Bethany Hamilton and Laird and maybe Alanna. Sometimes, I like to think about what Kelly Slater would look like if he let his hair grow out. Would a Kelly Slater with a cul-de-sac on his head still hold the same gravitas as the shiny-domed one? Would you still bid as much on a surfboard he signed? Well, we’ll never know, because someone–a much kinder, richer person than you or I (unless you are, in fact, the kinder, richer person)–just bought a signed Gamma from Slater’s personal collection for a staggering $25,000.

The board was being auctioned off by SurfAid, who gave 100% of the proceeds to the SurfAid Cup Malibu 2017 in support of SurfAid’s Mother and Child Health Programs. Within an hour of the Someone, however, ruined all the fun of the bidding wars and hit the “Buy It Now” button, which meant forking over a cool $25,000 for a good cause.

But hang on. If you’re around Southern California and you’re super sad that Mr/Mrs. Wealthy fun-ruiner/serious do-gooder used the “But It Now” button, there are a few more boards you can bid on at the SurfAid Cup Malibu launch party. It’s at Duke’s on Friday, September 8th, and many beautiful people will be there on the patio while their hair and their short-sleeve button up shirts are tousled by a warm breeze. The sun will paint the sky and sea with its disgustingly pretty pastel palette and you will hear the ice clinking in their glasses while they laughing about silly little nothings. There are two boards to choose from, should you want to be involved–a fish shaped by Rob Machado, and a Taylor Jensen TJ Pro. Taylor, as you probably know (you probably don’t because he rides longboards!) is the proud owner of two ASP World Longboard titles, six North American National titles, three Australian titles, and over 50 career victories.