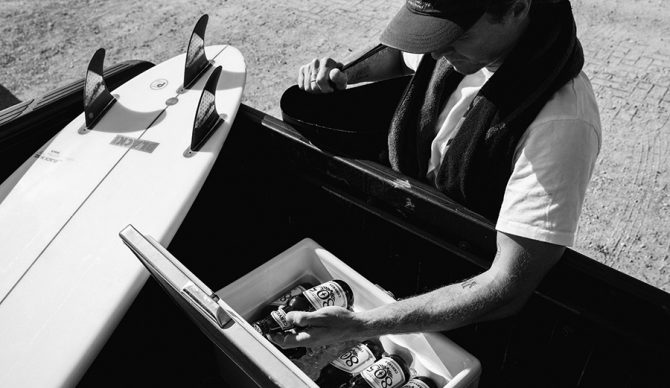 Alcohol has always been a part of the professional wave-riding landscape. Photo: 805

Hard chargers to weekend warriors agree: nothing is as satisfying as that chilled, post-surf adult bevy after a long day in the sun and salt. The alcohol market has long tapped into the power of the booze-and-beach combo, a winning harmony of hobbies – boards and brews. Now we’re seeing an expansion of sponsorships and support that extends beyond stocking contest coolers with grab-n-go cans and coozies. (No complaints there.)

Booze brands of a variety of fermentations are featuring – and supporting – the surf industry, from the big names to community standouts. Images of famous surfers, ever-struggling shapers, and several in-betweeners are gracing the social pages and promos of these brands, shining a light on their talents. Wise, business-minded players responded in kind, jumping at opportunities to dabble in drinking and debauchery.

Topping the list is the Corona-World Surf League pairing. The crowned cerveza’s name and  blue and yellow logo is attached to most recent WSL branding, contest names, plastered on every banner, and a permanent fixture in the corner of your screen. If all goes as planned, next time a pau hana crave strikes, our Pavlovian brains will reach for that Corona, quenching like the pros. Perhaps pushing the bounds of omnipresence, Corona’s sponsorship is doing its part to keep contest surfing flourishing and, real talk,  the product is one we would be probably be stocking our beach coolers with anyway. 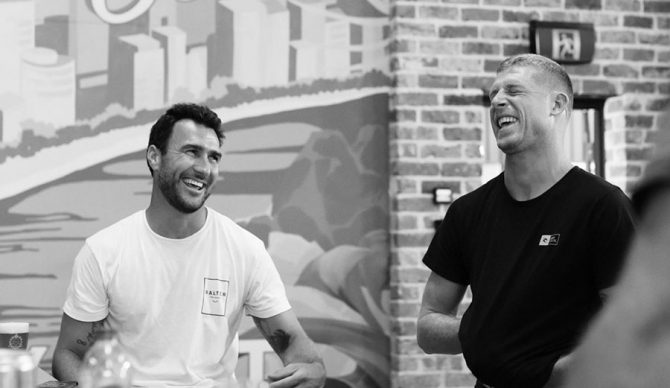 Mick Fanning and Joel Parkinson, laughing all the way to the bank. Photo: Balter Brewery

With alcohol’s long history in the surf world,  it was only natural for stars like Joel Parkinson, Josh Kerr, Mick Fanning, and Bede Durbidge to get into the hops for themselves when they started Balter Brewery in Australia. (The pack has since cashed out on the endeavor.) It was a success from the launch. The team brewed up XPA, which went on to win Best International Pale Ale in the Australian International Beer Awards in the beer’s first year – an impressive kickoff for a side gig launch. But then again, Aussies aren’t known for messing around when it comes to drinking. More of the Balter brews went on to be award-winning vices and the label collected accolades at a rate akin to Fanning’s wins in the water. When Parko, Kerr, Fanning, and Durbidge changed their titles from co-owners to founders, the recipes were handed off to Carlton and United Breweries (CUB). Fans of Asahi, Fosters, and Mountain Goat may recognize the CUB name from the seven-point font on the label. Oh, and one other brand under CUB’s ownership? That’s right – Corona.

Even as the surf world gets the support of CUB’s labels in varying ways, there remain some smaller-scale, if not down-home brewers out there that have managed to keep it small and support lesser-known players in the industry. California’s central coast signature black-canned beer, 805, is a national label aiming to support niche, small-town communities. 805 has an ongoing campaign highlighting boardriders and boardshapers local to the label’s homegrown area code – 805 (roughly San Luis Obispo to Santa Barbara). Noleta-based shaper Joe Yee and rider Mikey McCabb join Central Coast freesurfer Nate Tyler as happy consumers and team riders. Tyler recently dropped an edit courtesy of the Firestone Walker label. Just part of a collection of the beer’s many signature black-and-white short edits shining a light on notable surfers and recognizable breaks, from Rincon to C-Street.

Also out of the Central Coast is a surfer-brewed-and-backed label that has fast risen the ranks of popularity. M. Special has surfing brewmaster Josh Ellis at the helm. Ellis has helped cook up some of M. Special’s finest hops. (His favorite? “The next one,” he says.) The label has stayed small and operates from its original hometown. For the crew of M. Special, surf is in the DNA. Brenden and Emmett Malloy, cousins of the Malloy family of surfers including Keith, Dan, and Chris, launched the brand.

With the support of family and friends, Thicker Than Water director Emmet Malloy got the M.Special label up-and-running out of Isla Vista, the university town – a drinker’s paradise – where Malloy’s path first crossed with surfer-musician Jack Johnson’s. The group of surfers and artists known as the Moonshine Conspiracy would produce a total of six surf films. Emmet and Jack are still rumored to crack open a post-surf beer together when they reunite – M.Special’s Lazy Eye brew, of course.

Booze has permeated the surf scene in other ways, too. As exposure grows, so does potential earnings and overall support for all aspects of the sport. Vodka Ketel One got in on this a while back through a partnership with Vice called Modern Day Craftsman which featured the business and lifestyle of Hawaii-based Pyzel Surfboards founder and shaper Jon Pyzel.

Even the ultra alternative refresher, kombucha, has made an appearance on the scene. Maui big wave surfer Albee Layer is a fan of  the hopical citrus hard booch – a nice gluten-free alternative to beer for the celiac-keto-hippie surfing crowd. “My buddies started June Shine a while back and originally what drew me to it was a chance to support a product that was sustainably sourced,” said Layer of the One Percent for the Planet member. But Layer also found the brew could help him sustain his post-surf beverage ritual without sacrificing. “Now that I’m 30, I still enjoy drinking but I’m not some party animal shooting tequila every weekend. I want to be healthy but still not boring,” he said of the probiotic-laced vice which still packs six percent alcohol content.

That’s exactly the point, according to June Shine’s spokesperson Adam Walker. “Oftentimes, getting up for a surf means cracking it early. We were tired with the way traditional alcohol made us feel the morning after a fun night. So we started our own thing — creating alternative alcohol that would allow us to savor an evening without giving up a morning.”

Another mind-altering vice is seeping into the world of surf. Wine has made its way into the mix with Barefoot Wines partnering up with Surfrider Foundation to sponsor coastal beach clean ups, getting in on International Surfing Day events, backing surf film debuts like 2011’s One Beach and the 2020 WSL-backed Coco Ho series A Virtual Happy Hour and A Beach Day with Coco Ho and Friends. And with sought-after grape varieties grown in sought-after surf destinations like South Africa, Portugal, Spain, France, and California, it’s only a matter of time before the “rose all day” refrain becomes “rose and riding waves.”

Yes, alcohol has been a part of the surf industry for decades now and it doesn’t seem to be going anywhere anytime soon.